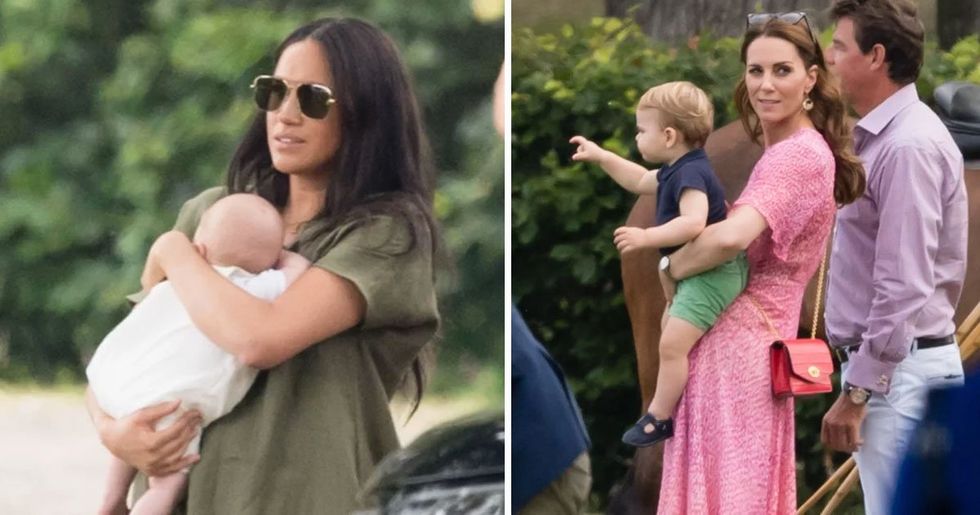 With both Prince William and Prince Harry participating in a charity polo match, their respective wives joined forces to watch from the stands. Will this move prove that these two royal ladies can get along, despite the media's portrayal of their relationship?

Not only did the event mean a rare glimpse of Kate and Meghan together, it also cemented the first royal playdate between the first cousins.

So how did it go?

Did Prince Louis share his juice box? Did Charlotte hold the new baby Archie? Did Prince George organize a game of hide-n-seek?

They were only celebrating Baby Archie's christening last week.

Whether William and Kate's awkward expressions are merely due to something that the photographer said or the fact that Charles had just let one rip, we'll never know. One thing is for sure though, this officially released royal photo has done nothing to diffuse rumors that the couples are not getting on. Let's have a look at some of the reasons that Meghan and Kate are rumored to be a little frosty towards one another and a quick look at some other points of contention in the royal family.

The new father and husband, Prince Harry, faced a lot of criticism for his "scruffy" choice in footwear for his son's christening. This isn't the first time that he's been called out for wearing these particular brown suede shoes, and, as he seems to keep pulling them out of the closet, we won't be surprised if this isn't the last we've seen of them. Personally, I think they're alright but, eh.

The Queen was a no-show for baby Archie's christening.

She managed to make it to all of Prince William's children's christenings...

Eye on the prize? The Queen has a clear focus on future king, Prince George.

Some think that Prince Harry was always the overlooked prince.

With his brother first in line for the throne, Prince Harry was always pushed to the side in some people's eyes.

The U.S is certainly not overlooking baby Archie, though.

Even if some of the British public are overlooking this Prince, the U.S of A are certainly big fans.

All the major league U.S baseball teams are fans of Archie.

Both The New York Yankees and The Red Sox have gifted the Royal newborn a babygrow, aw!

Maybe Prince Archie will grow up to be a sports star?

But would he play for the U.S or the U.K? I'd advise that he joins the team that's doing better... or the team that offers him the most $.

Rumors have circulated this week that one of the unrevealed godparents of baby Archie is, in fact, good pal of Markle, Serena Williams.

Meghan was seen cheering on Serena this week at Wimbledon.

I would encourage you to notice how cheerful and relaxed Markel appeared alongside an unfamiliar woman while watching Serena play this year...

If an image says a thousand words, this one would be saying something like... Kate: Don't get comfortable you, you'll never be a Windsor. Meghan: Uh, okay. Can't we just get along? Kate: One doesn't mix with Americans. Meghan: Right. ... Or maybe they were just disappointed by the match. Probably that.

But Meghan did indeed marry the Prince and become a part of the family.

On May 19th, 2018, Harry and Meghan were wed in St Paul's Cathedral. Not only did the marriage cement their relationship, it also meant that Kate and Meghan became in-laws.

Since Kate and Meghan became sister-in-laws, the media has been wondering whether or not they get on. The next question will be whether the cousins get on. The playdate this week has opened up a whole other can of worms.

Since last Christmas, Kate and Meghan seem to have been getting on much better. Perhaps, once Kate got to know the once-divorced American actress, the two found some common ground... Maybe they're both crap at Pictionary?

So how did the playdate go?

With the boys out of the way, playing their charity polo game (la de da), their respective wives had no-one to hide behind throughout the afternoon...

Well, apart from their children...

Future king, Prince George, appeared comfortable with his Aunt Meghan and cousin, Archie, at the playdate.

Meghan was keen to protect baby Archie from the UV rays.

Kate was engrossed in her play with Prince Louis

The mother of three was seen pulling silly faces at the baby Louis, much to his amusement, we're sure.

Prince Louis could be seen trying to take Kate's sunglasses from her head.

"Do they look better on me Aunt Meghan?"

Prince Louis succeeds in taking his mom's sunglasses and shows off his new look to Aunt Meghan.

Meghan points at Prince Louis, appearing to approve of his sunglasses swipe.

Picnic in the trunk!

Kate and the kids seemed like any regular family, having a picnic in the shade of the car trunk.

Princess Charlotte tucks into a sandwich amidst the summer heat.

While older brother, George, mucks about in the trunk and Kate feeds Prince Louis carrot sticks from a Tupperware container.

King of the castle!

Prince George shows off how tall he's become when stretching out in the trunk of his parent's car.

He must be at that age... Prince Louis continued to grab at people's sunglasses, much to his mother's dismay. All in all, it seems like the royal playdate was a complete success. I guess we'll have to wait for Archie to get a little older for him to be able to play along with his royal cousins. As for Kate and Meghan, it does seem like motherhood has brought them closer than they ever were before and we're super happy to see it.