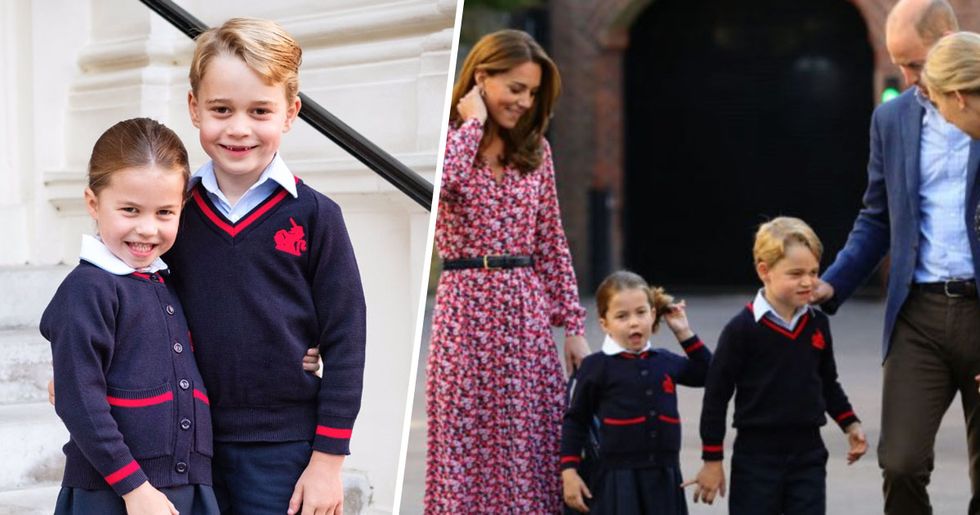 The first day of school is a nerve-wracking experience for any child, whether they're an English princess or not.

And Princess Charlotte, who enrolled at Thomas's Battersea earlier this week, had the whole world watching her every step as she arrived at her new school.

The young princess seemed visibly nervous as she approached the school and played anxiously with her hair while holding her mom's hand. However, her mom, Kate Middleton, offered some handy, yet heartwarming, advice for her daughter about how to handle the first-day nerves.

Keep scrolling to read the full story, and to hear the advice that the Duchess of Cambridge had for her daughter.

The Royal Family are the most famous family in the world.

And Prince George is incredibly protective over his little sister.

Which, with Charlotte having just enrolled at the same school as him, should help her greatly as she settles in and makes new friends.

George will show his little sister the ropes.

A source from Hello! Magazine added that George can be very protective of his younger sister. "Prince George is a very protective and lovely older brother," said royal biographer, Penny Junor. "I'm sure he'll look after his little sister and take great pride in showing her the ropes."

And, to help soothe Charlotte's nerves, Kate reminded her daughter of just that.

In a video of Kate, Prince William, George, and Charlotte approaching the school entrance, Kate can be heard telling her daughter, "George will help lead the way."

Kate's advice is for Charlotte to follow in her brother's footsteps...

Which is possibly the best advice any mother could give to their child on their first day at school, especially for the princess who is so very close to her brother.

Though some people don't think that Charlotte will follow exactly in George's footsteps...

@KensingtonRoyal I think they teachers who believe Princess Charlotte is going to be as quiet & well behaved as Pri… https://t.co/P6T6hU2QtX
— FiddleDeeDee⁷ (@FiddleDeeDee⁷)1567696028.0

As she is just far too mischevious to sit quietly and behave in class, isn't she?

Most Twitter users agreed that Charlotte may not be as well behaved as George.

@SherriBunch49 @KensingtonRoyal It was the various tongue outs to the press over the last two years that made me think that!!! Love her!!
— Sally Atkinson (@Sally Atkinson)1567707983.0

Though, with her many adorable tongue pokes at the press, who can blame them for thinking so?

We're sure that Charlotte will love her time at Thomas's Battersea.

And we can only hope that her mischevious and unique personality will grow even more. If this article has got you in the "royal" mood, keep scrolling to read thirty-five different facts about the Royal Family that you may not have known before... Though, be warned, some of them are scandalous.