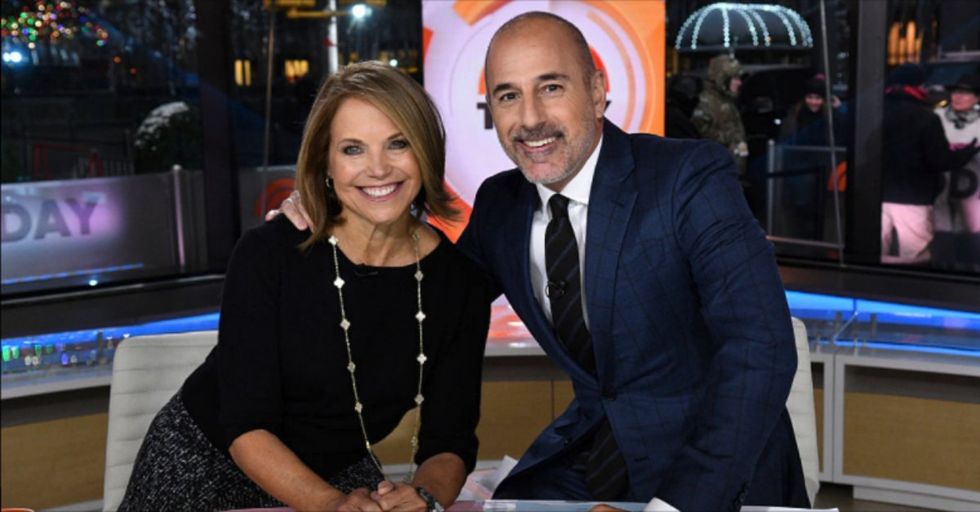 In November of 2017, Matt Lauer — long-time co-host of NBC's TODAY show — was fired after allegations of sexual misconduct. While there weren't many details given right after the firing, information continued to come out in the days following, and boy oh boy there was a lot to digest. As it turns out, Lauer had a history of sending his coworkers packages of sex toys (gross). He had a button installed under his desk so that he could close and lock his office door from the inside (super creepy). And did you see the video of him telling Meredith Vieira to "keep bending over" because it offered him a "nice view"? (Eeeeewww.)

We've all discussed Matt Lauer and his deplorable behavior for the past few months, but there hasn't been as much reaction coming from the people who worked closely with Lauer. However, it seems that is beginning to change. Katie Couric, Lauer's former TODAY show co-host, has finally spoken out about the allegations.

In some ways, Lauer's firing from the TODAY show was sort of swept under the rug.

We all talked about it, of course, but there wasn't a lot of on-air reaction from the current co-host, Savannah Guthrie at the time. Even earlier this month, when Hoda Kotb was promoted to replace Lauer, it was done without any mention of why the position had opened up. That's not to say that Savannah or Hoda or anyone owes us their reaction, of course. But it was only human for us to wonder how they were feeling.

There still hasn't been much word from Guthrie, Kotb, or really anyone on the current TODAY show cast. People even started hounding former members of the show for their reaction. Back in December, one of her Instagram followers challenged her to comment on the situation.

The commenter harangued Couric on a picture she posted of her and her daughter. At the time, Couric said the news was "incredibly upsetting" and that she'd say something when she was ready to.

Now it seems as though that time has come.

In an interview with People, Couric — who spent 15 years as Lauer's co-host said, "The whole thing has been very painful for me. The accounts I've read and heard have been disturbing, distressing, and disorienting, and it's completely unacceptable that any woman at the Today show experienced this kind of treatment."

"I had no idea this was going on during my tenure or after I left," she continued. “I think I speak for many of my former colleagues when I say this was not the Matt we knew. Matt was a kind and generous colleague who treated me with respect."

While most are interested in hearing what Couric has to say about Lauer, there are some who don't think she's being completely forthcoming with what she knew. And those people (of course) couldn't help but comment on the situation...

Some people think that there's no way Couric didn't realize what was really going on.

This Twitter user pointed out that Couric once claimed that Lauer pinched her on her bottom a lot. That's in reference to a comment Couric made on Watch What Happens Live with Andy Cohen back in 2012. Here's the video clip in question:
In the People interview, Couric addressed this very comment, saying, "A joke I once made on late-night television was just that, because it was completely contrary to our brother-sister relationship. It’s still very upsetting." According to Couric, she was just making a joke, and it was taken completely out of context to further fuel the hate for Lauer. (The same might be said of the 2012 sexual harassment spoof video Lauer made. Can we all just agree that sexual harassment is not something anyone should be joking about?)

But here's the thing. It doesn't really matter if you think Couric knew about Lauer's behavior.

She's not the one who was sexually harassing people, after all. Going after Couric and vilifying her for what you assume she knew is all kinds of problematic. It was the same problem with the people making "She Knew" posters to call out Meryl Streep after people assumed she knew about Harvey Weinstein.

Let's try and keep the focus on the actual problem here, right?

Couric was not responsible for Lauer's actions. The only person responsible for Lauer's actions is — you guessed it — Lauer. Let's also keep in mind that people who sexually harass others (like Matt Lauer and Harvey Weinstein) typically target people below them. There really is a chance that Couric's experiences with Lauer were completely different from the way he treated other women. Regardless, he's the bad guy here.

Couric went on to show her support for Guthrie and Kotb as the two host the show.

"I really admire the way Savannah [Guthrie] and Hoda [Kotb] and the entire Today show staff have handled a very difficult situation," she said. For her part, Couric is currently working on a National Geographic series that centers around sexual harassment in the workplace.