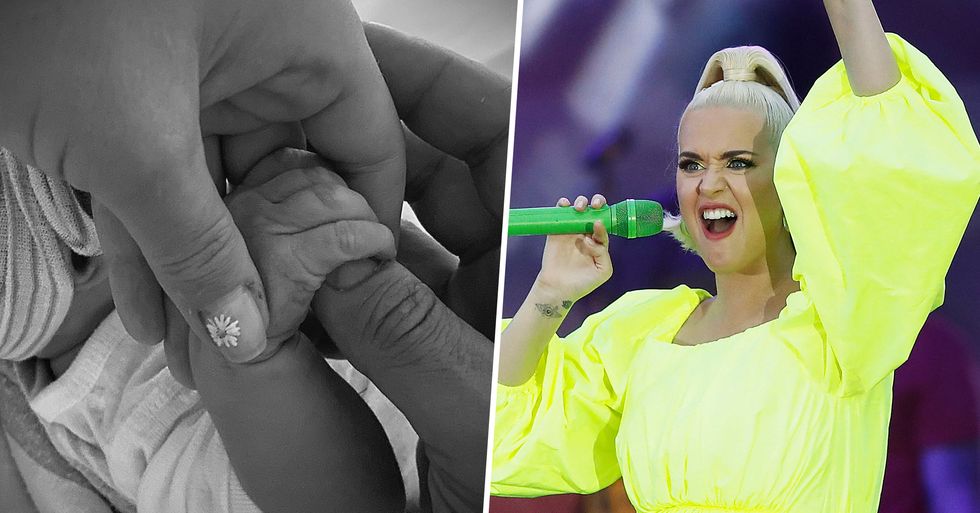 Just hours after Katy Perry gave birth to daughter Daisy she was promoting her new album, and while many want the new mom to take a breather, she is adamant that she won't let motherhood get in the way of her career...

Katy Perry is new to the world of motherhood...

But she isn't letting motherhood get in the way of her career, in fact, she went right back to work just hours after giving birth!

She's a singer, a songwriter, and a superstar.

And today she added "mom" to her CV!

But, as of a few months ago, they had something much more exciting to look forward to.

We were utterly thrilled for the couple's happy news...

And watched the pregnancy with bated breath.

And she stripped away the Hollywood glam to deliver a super honest post about her pregnancy.

And she revealed her swollen and very sore looking belly button, alongside the caption "Pregnancy realness" with a sick-faced emoji.

As she zoomed into her stomach, she said, "Do you guys wanna see something gross?"

And she is also heard to whisper, "Disgusting." Anyone who has been pregnant can relate to this.

And many feel that it is quite rare for a celebrity to reveal themselves in such a stripped-back and honest manner.

And one thing that many fans simply loved about the post...

Was Katy's stunning look throughout the whole thing.

As she and Bloom decided who would be godmother to their daughter.

No other than Jennifer Aniston will be taking on the role.

And since the news surfaced, everyone has been saying the same thing.

Katy and Jen have been pals for nearly a decade.

"Katy and Jen are very close. During lockdown they went for socially distanced walks, and spent lots of time catching up," a source close to the pair revealed.

Jen has also reportedly been offering her support to the couple during the pregnancy.

The source claimed that Katy had placed Jen at the top of the list of potential godparents.

And when they broke the news to her...

Jen got pretty emotional. "[Jennifer] is pretty chuffed about it as well and cried when they asked her," revealed the source in an interview with The Sun.

Of course, this isn't the first time Jen has been chosen for godmother duties.

Since the news broke that Jen had been chosen by Katy...

Twitter exploded with reactions, with many fans bursting with excitement over the news.

Many couldn't help but raising this point.

@scenesofriends Imagine growing up with these icons and receiving gifts and hugs and kisses from them 🤧
— lavinia⚡️ (@lavinia⚡️)1594532656.0

Everyone kept talking about how lucky the little girl will be.

People truly couldn't get enough of the news.

Looks like fans think Katy made a good choice.

Just 2 weeks ago, the couple announced Katy had given birth.

But despite going through something as emotionally draining as childbirth, she is still promoting new music...

Do you think it's inappropriate for a new mom?

A source has revealed that "she wants to submerge herself into motherhood as much as she can, but she is also not putting her career on the back burner."

“There are already discussions about upcoming projects and work. Katy and Orlando do have help with the baby, but Katy insists on handling almost all of the baby needs."

As for Bloom he “does have plans to start traveling and working soon," said the insider.

However, he “also wants to enjoy this process."

Want more controversial pregnancy stories? Scroll on to find out why fans are once again slamming Chrissy Teigen...