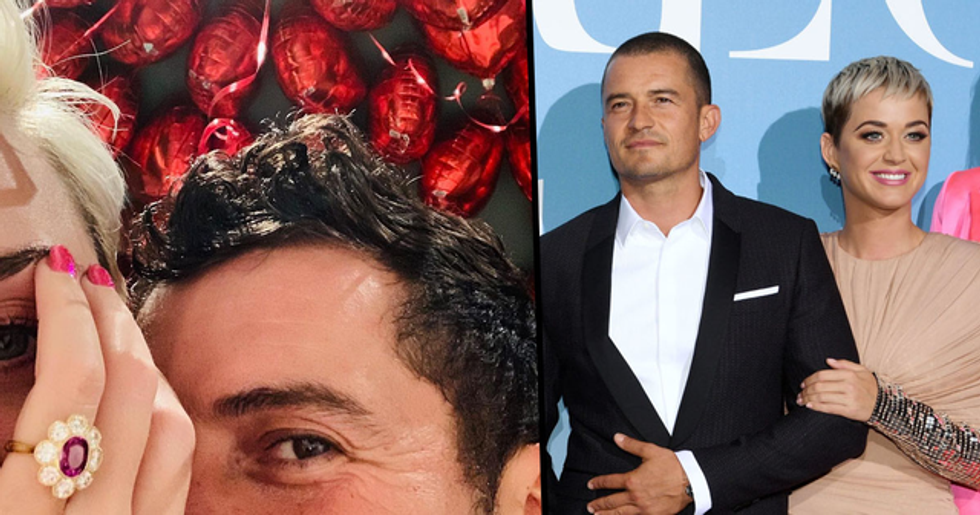 Katy Perry and Orlando Bloom Got Engaged on Valentine's Day

Katy Perry and Orlando Bloom are two stars so big they're household names. The two have both had very public romances in the past. But many didn't even know they were together - let alone getting serious!

Regardless of the public knowledge of the relationship, it seems the pair are certainly on the right track. Perry announced on Instagram yesterday that the couple were making it official, and showed off her gorgeous (and unique) engagement ring. The story of Bloom's proposal is super romantic - not least because he popped the question on the most romantic date of all, Valentine's Day.

At first, the couple were a little shady about the status of their relationship, but they have now officially confirmed wedding bells. And if the proposal and ring are anything to go by, the Bloom-Perry wedding will not be one to miss!

This is Katy Perry, singer, songwriter and superstar.

She came on the scene in 2008 with explosive (and controversial) hit, I Kissed A Girl.

She's one of the most successful singers of all time.

Her 2015 Super Bowl half time show is thought to be the most watched musical event ever.

The English actor is one of the most instantly recognisable faces of fantasy, thanks to his role as Legolas in the Lord of the Rings franchise.

His role as Will Turner in 2003's Pirates of the Caribbean: The Curse of the Black Pearl is what really made him a household name.

Although that could just be a case of shifting priorities.

Because Katy Perry and Orlando Bloom are the latest A-list couple.

The pair reportedly began dating after the Golden Globes in January 2016. The pair split in February of 2017, but confirmed they were back together in April of 2018.

And it seems things are going pretty well.

As Perry shared a snap of the newly-engaged pair on her Instagram on Valentine's Day of 2019 - including a stunning pink ring.

Considering we were barely sure the couple were together, the news that they're engaged has come as a bit of a shock - albeit a pleasant one!

Perry has had a few high-profile relationships.

As she rose to fame with I Kissed A Girl, she was dating the lead singer of the Gym Class Heroes, Travis McCoy.

Pery also had a high-profile relationship with Russell Brand.

She met the British comedian while filming a cameo part in Get Him To The Greek, and the pair quickly began a relationship.

The pair married in a traditional Hindu ceremony in October of 2010.

But the couple weren't meant to last, and they divorced just fourteen months later. The Netflix documentary, Part of Me, chronicles the breakdown of their marriage.

The pair dated from August of 2012 to February 2014, and reportedly remain on good terms with one another.

After the breakup, Perry met Bloom.

The two reportedly first encountered each other at the 73rd Golden Globe Awards, in January 2016, and felt an immediate spark.

Bloom has been no slouch in the relationship stakes, either.

He had an ongoing on-again, off-again romance with actress Kate Bosworth from 2003 to 2006.

The pair first got together in late 2007. They became engaged in June of 2010, and married the very next month.

Kerr and Bloom have a son together.

Flynn Christopher Bloom was born in January 2011. Sadly, the family couldn't stay together, and Bloom and Kerr split in late 2013.

After Bloom and Perry's first meeting, they were fairly secretive about their romance.

Internet detectives had to piece together the fact that the couple had definitely started dating.

She shared this snap of the pair lying down on some steps at the Cannes Film Festival.

Then the paparazzi captured this amazing moment.

Bloom, completely naked, on a paddle board, with a bikini-clad Perry looking hilarious uncomfortable. This confirmed the couple were definitely more than just good friends.

The couple split soon after, in February 2017.

But eagle-eyes fans noticed the two took a trip together in early 2018 - which is believed to be the start of their reconciliation.

They confirmed they were back together in April 2018.

That same month, Perry shared this amazing picture of the couple meeting the Pope. There's just something great about when celebrities and religious figures mix.

And these theories were confirmed soon after.

Perry shared this snap of the corner of the pair's faces, alongside multiple heart shaped balloons and a truly stunning pink engagement ring. Bloom shared the same picture, with the simple captions, "Lifetimes."

Another fan shared this adorable collage.

It features tons of great photos of the pair together, usually with big goofy grins or romantically staring into each other's eyes.

Including a better look at that ring. It's super pretty and very unique, which makes it rather perfect for Perry. Congratulations to the happy couple!