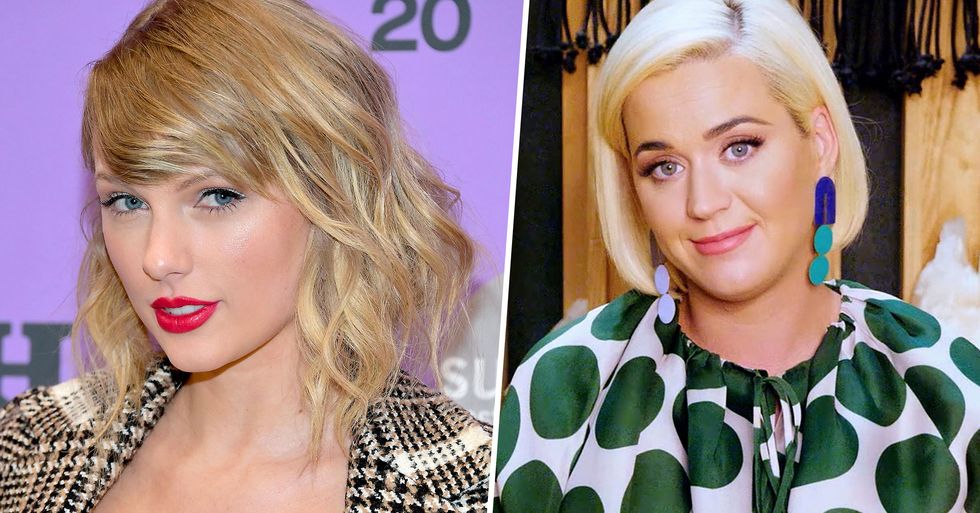 It's been 2 years since Katy Perry and Taylor Swift left their "bad blood" behind, and Taylors latest gift to baby Bloom proves there's nothing but love between the pair...

Taylor was born in Nashville, Tennessee, in 1989.

Taylor Swift is best known for her pop and country-style music and her songs that are strongly based around her personal life never fail to gain wide-spread coverage around the world.

Born and raised in California, Katy Perry rose to fame after the release of "I Kissed A Girl," which caused controversy but also built Katy's great success.

This is the year that Taylor Swift first reached out to Katy Perry via a very cute and heart-warming tweet complimenting Katy's "Waking Up in Vegas" music video. Katy publicly tweeted back claiming that the couple should write a song together, causing the internet to go wild.

Poor Taylor was fresh from having her acceptance speech interrupted by the arrogant Kanye West at the VMA Awards, whilst Katy was finishing up her tour backed by the breakthrough of "I Kissed A Girl."

Now that was painful to watch.

Did anybody else lose all respect for Kanye after this little stunt?

@Katyperry knows how to throw a birthday party! I would even go as far as to say it was party-licious. Best EVER. Happy bday, pretty girl!!
— Taylor Swift (@Taylor Swift)1256456188.0

The pair were hitting it off via Twitter, and Taylor even took to the platform to gush over how awesome Katy's birthday party was. It was pretty obvious that Taylor attended!

Taylor was dating musician, John Mayer, in 2009, but the couple's break up appeared to be a spiteful one after she released "Dear John" in 2010. Meow.

Katy soon sank her claws in.

After her divorce from Russell Brand in 2012, Katy and John struck up a short, but sweet, romance that even made the cut on Instagram. What happened to the "stay away from your friend's ex" rule...?

The pair remained friends, however.

Somehow, Katy and Taylor didn't let something silly like a man get in between their friendship.

Between 2011 and 2012, Katy was completing her "California Dreams" world tour. In 2013, Taylor began the "Red Tour" and invited three of the dancers that toured with Katy to accompany her on the tour.

Here's when it called kicked off.

Katy approached dancer, Lockheart Brownlie, and asked him and two others who were touring with Taylor to join her on the "Prism" tour. After having worked with Katy for two and a half years previously, the dancers agreed. But Katy's condition was to ditch Taylor halfway through her tour. Ouch.

Speaking to Rolling Stone in 2014, Taylor made this statement: "For years, I was never sure if we were friends or not. She would come up to me at awards shows and say something and walk away, and I would think, 'Are we friends, or did she just give me the harshest insult of my life?' "She did something so horrible. I was like, “Oh, we’re just straight-up enemies". And it wasn’t even about a guy! It had to do with business."

"She basically tried to sabotage an entire arena tour. She tried to hire a bunch of people out from under me. And I’m surprisingly non-confrontational – you would not believe how much I hate conflict. So now I have to avoid her. It’s awkward, and I don’t like it. "I know people will make it this big girl-fight thing. But I just want people to know it’s not about a guy."

Caution: the tea is hot.

When Taylor's single, "Bad Blood," dropped in 2015, critics swooped on it like vultures. She gave a vow when speaking to The Telegraph: "I’m not giving them anything to write about. I’m never going to talk about her in my interview. It's not going to happen."

A few years went by.

Petty little incidents came and went, including sly digs in lyrics at one another and social media wars. I must say, it started to get a little boring...

In June 2017, Katy came out with this statement: "I forgive her and I’m sorry for anything I ever did, and I hope the same from her… There are bigger fish to fry, and there are real problems in the world."

Katy even went on to announce her love for Tay-Tay...

Speaking to Australia's Today Show, Katy said: “I love her, I always have. We’ve had our differences but I just continue to say, ‘God bless her on her journey’." Taylor continued to hold her silence, however...

But something finally happened in May 2018...

Everybody to Taylor's Insta story... immediately! Taylor was preparing for the first night of her "Reputation" tour and she uploaded a picture of a note and an olive branch that she had received from Katy as a peace offering.

Getting all them feels...

Taylor later revealed that the pair blamed their zodiac signs for the feud.

Taylor is a Sagittarius, and Katy is a Scorpio.

Taylor continued: "And I remember in the long talk, she was like, 'If we had one glass of white wine right now, we'd both be crying.' Because we were drinking tea."

"We've had some really good conversations," the star said.

"She's like, 'I'm a Scorpio. Scorpios just strike when they feel threatened.' And I was like, 'Well, I'm an archer. We literally stand back, assess the situation, process how we feel about it, raise a bow, pull it back, and fire.' So it's a completely different way of processing pain, confusion, misconception," Taylor concluded.

This year is about all the kindness.

Earlier this year, Katy let fans in on the reason they both decided to patch things up.

She said they both wanted to set a good example for young girls.

Katy said: "It's hard for young girls growing up, [with] cliques and high school and pettiness and all that stuff, so now we're super friendly and I've always wanted the best for her and we can talk about the best we want for each other."

And it looks like the pair are best buds after everything they've been through, as Taylor sent the most adorable gift to her new baby, Daisy Bloom, which Katy shared to Instagram on Monday.

The singer sent a handmade peach satin blanket that had Baby Bloom embroidered on the front.

She also included a handwritten note, addressed to "Katy, Orlando, and little one." How cute!

"Miss [Daisy] adores her hand-embroidered blankie from miss @taylorswift. Hope it’s one she drags around for years till it becomes an unrecognizable shred that she keeps in her pocket as a teenager ♥️."

She set the location as "Stream Folklore," a nod to Taylors latest album.

Katy and Orlando introduced Daisy Dove Bloom into the world on Wednesday, August 26.

Keep scrolling to see what Queen B herself sent to Katy Perry after she announced her little bundle of joy...