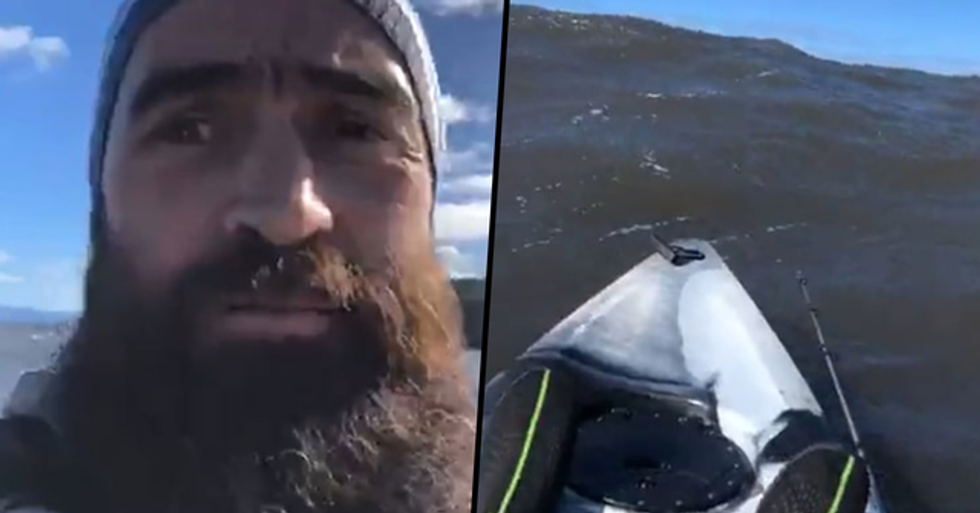 A man who was kayaking off the coast of Australia recorded his final moments before he tragically drowned in a chilling Facebook Live video.

Over the weekend, Jeremy Peter Worthy tragically lost his life.

The forty-three-year-old from New Zealand was kayaking off the coast of Cullendella Creek, Australia, on Sunday when he came into some difficulties.

There was a sudden and unexpected swell...

And, combined with the already turbulent weather conditions, Jeremy was simply unable to kayak or swim against it.

And, hours later, his body was recovered by the police.

Efforts to resuscitate Jeremy were made...

But they were to no avail. "Officers from South Coast Police District attended and located a body in the water," NSW Police reported in a statement. "An officer retrieved the body, before providing CPR until paramedics arrived. Despite best efforts, the man died at the scene."

But even more devastatingly...

Jeremy had documented his kayaking trip in the hours leading up to his death, and he had even broadcasted his final moments in a harrowing Facebook Live video.

It is truly chilling.

On Sunday, Jeremy had posted that, despite being 4 hours late to his kayak, he was "set and ready to go."

Upon setting sail on his doomed trip, Jeremy took to Facebook to show his setup...

Where, alongside a photograph of his kayak and a selfie, he noted the difficult conditions, writing: "Got a bit swamped launching lol bit of weed in the water too. Not [sic] tooooo bad past the shore waves though. Least they are only small at that beach. And the Esky don’t seem to make a lot of difference to the kayak, maybe a little bit more drag."

Jeremy showed the increased swells and high winds and commented, while in seemingly good spirits, "This is tiring."

But his visible concern soon sets in.

Jeremy was only wearing a light life vest, and he becomes notably exhausted from kayaking against the heavy waves.

The water was visibly choppy...

And, several times throughout the 4-minute video, Jeremy turns his camera around to show the choppiness, with his kayak swaying around unevenly.

As he realizes that he won't be able to kayak back the way he came, he ponders out loud:

"To go the way I wanna go, I gotta turn my back on this," in which he points his camera at the choppy sea. "And if I turn my back on this, and a big mother wave comes, especially with that big bloody esky there..." now panning to the heavy cooler on the rear of his kayak."

Jeremy continues to weigh up his options for the duration of the video.

"Go back where I came... that's too far, too crazy..." he ponders, looking at the now-distant shoreline. "Keep going? Or stay here? And get caught..."

But, despite his precarious situation, he tries to remain positive.

"It's not very peaceful, is it? It's not very calming... But it's good to get the blood flowing. Adrenaline."

It is a truly haunting watch.

Though he is staying calm, you can just see the growing concern on Jeremy's face as he drifts further away from the shore.

And, despite the full video being completely devastating, it is his final words that are by far the most haunting.

He jokingly calls out one of his friends for suggesting kayaking in the bay in the first place. "Pauly, I'm blaming you for daring me to come out here. Paul, this is on you mate."

The video concludes with him marveling at how enjoyable and calm the sea is during a brief lull before he finally makes a decision:

A pinpoint of his location in the bay, which many of his devastated friends are assuming to be his last-ditch call for help.

Despite having a working phone, Jeremy never called marine rescue for help...

As he admitted in the video that it would be "too embarrassing."

Understandably, friends of Jeremy's are completely horrified by the video...

And many are expressing how they wished they had called for the marine rescue themselves. One Facebook user wrote, "Jez, this is truly unbelievable. I thought of you out there yesterday wondering how u were going..." while another commented, "yeah mate I was super proud how well he was living I thought it was a bit rough out there but that’s Jez he’s always done insane s**t and pulled it off."

You can watch the full video here, but please watch with caution.

Rest in peace, Jeremy Peter Worthy. It is moments like these that we truly take for granted the ones we love... In a similar instance, a devastated family from Tennessee was reunited with the footage from their son's final moments after a diver recovered his GoPro from the waterfall where he had drowned. Keep scrolling for the heartwrenching story...