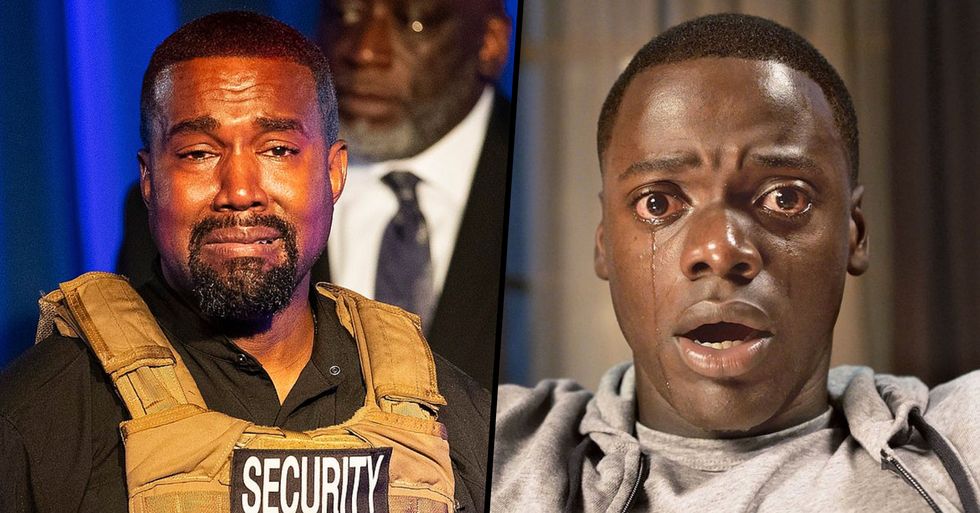 In yet another strange turn of events, Kanye West claimed that the movie Get Out was about his own life in a now-deleted series of Twitter rants.

People are seriously concerned about the rapper...

But, despite people's doubts, Kanye hosted his first campaign rally over the weekend...

And following his alarming and erratic behavior, Kanye took to Twitter to rant about some of the most bizarre things.

But it turns out that Kanye wasn't quite finished there.

A few days after the rally, Kanye took to Twitter to post an alarming rant that has left his fans feeling even more alarmed.

In the now-deleted tweets, Kanye went off on erratic rant...

And not a lot of it made sense.

Screenshots show Kanye repeatedly tweeting about Kim trying to get him locked up...

And he compared himself to being locked up "like Mandela" which strongly suggests that he is feeling imprisoned in his current situation.

He then posted some questionable tweets about Kim's infamous sex tape...

And he was referring to Kim as "North's mom" which is a very unusual term to call his wife.

Kanye compared his life to the movie, Get Out.

Get Out is about an African American man who visits his white girlfriend's family for the first time and it turns out that the family is abducting black people to use them as slaves... and to perform bizarre experiments on them. The black people in the movie are almost used as puppets by the white family... which is extremely concerning that Kanye would compare his family life to the fictional movie.

Of course, fans were alarmed...

And they have been repeatedly expressing how the rapper is in desperate need of help.

But many fans aren't as convinced...

And they believe that Kanye's meltdown is just one huge marketing tactic for the upcoming release of his new album.

Kanye is no stranger to public rants...

And he always seems to be at his worst before he drops a new album... which is another concerning factor about the rapper, we must say!

Let's hope Kanye gets the help he so desperately needs soon...

And to see the comparison between the ways in which Kanye was treated compared to Britney Spears when they had their break downs, keep on reading...