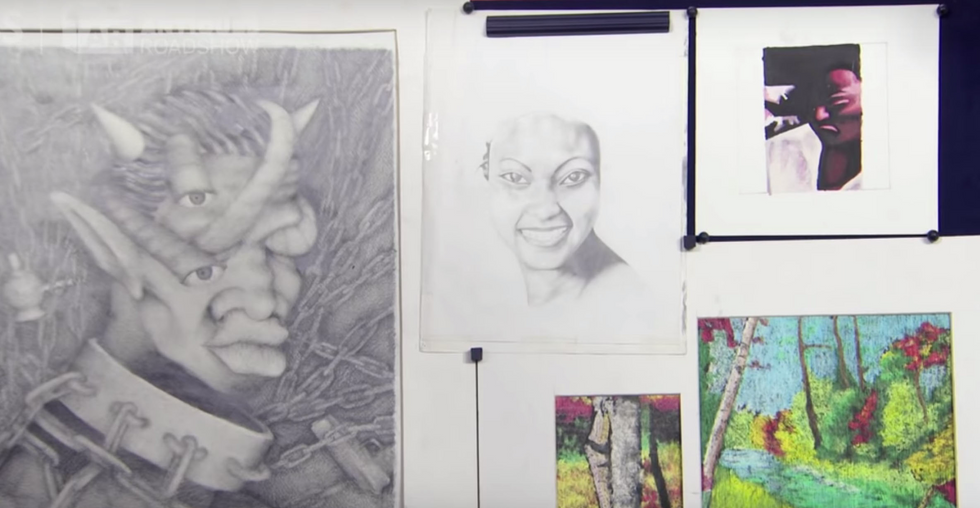 Do you think you could sell your high school art for thousands of dollars? Or would it just be your mom spending $20 on it so you don't feel bad?

Well, that's not the case for Kanye West.

Keep scrolling to see his artwork, and find out just how much it sold for on a recent episode of Antiques Roadshow.

Would anyone want to buy your high school artwork?

We probably couldn't sell ours.

In fact, we probably couldn't even give ours away for free.

Yeah, it's really that bad.

But it seems that there is one celebrity whos childhood drawings were good.

In fact, judging by the price that they sold for, they were very good.

For Kayne West, his talents don't seem to end.

From singing to fashion.

He now has another one to add.

On a recent episode of 'Antiques Roadshow', the rapper's high school art portfolio was praised.

Laura Wooley, who specializes in pop culture memorabilia was very impressed by it.

Now you might be wondering how the art came to the show.

Well, apparently from a relative.

A man who claimed to be married to Kayne's first cousin presented the pieces.

He explained that they had acquired the pieces after Kayne's mom died, in 2007.

So, they had hung on the pieces for quite a few years.

There were several pieces brought in by the exhibitor.

All of which were created whilst Kayne was in Polaris High School in Oak Lawn, Illinois.

Despite being made by the famous rapper that wasn't Wooley's main interest.

Wooley's interest was in a handful of selected works that highlighted Kayne's artistic range.

The five pieces of work that were selected included pieces done with graphite, gouache and scratchboard techniques.

And alongside the art was a flyer from 1995 for Kayne's first known art showing.

On the flyer, it read "Kanye Omari West, a 17-year-old Atlanta-born artist, began his study of art at age 4 at the Hyde Park Art Academy. Since that time he has studied art at the Art Institute of Chicago, Chicago State University, Nanjing University if the People's Republic of China and Polaris School for Individual Education.

"This fall, Kanye will begin his studies for the Bachelor of Fine Arts degree at the American Academy of Art in Chicago and continue to pursue a career as a music producer ..."

Wooley said "This flyer is really interesting because it gives the full background of his entire artistic training up until that point."

Adding, "I have to say he has a very impressive resume having attended the Hyde Park Art Academy at age 4, the Art Institute of Chicago, Chicago State University [and] Nanjing University in the People’s Republic of China."

Kayne's cousin-in-law who brought the paintings along explained that he was so well trained due to his mother, Donda West.

He said, "his mother pushed him to do anything that he wanted to do and made sure that it was available for him."

Speaking of Kayne's art Wooley also said, "It's an interesting thing when you look at art that is done by a celebrity.

"Because a good portion of the value of that artwork can actually depend upon something I call 'the enduring legacy' of the celebrity. So we see the values rise and fall with the popularity of the celebrity..."

"To have early pieces like this from someone who really will be an important cultural figure of our time, I think is really fantastic."

In the end, the paintings were valued very high.

You can watch a clip from it here...

Would you have brought any of them?
20%