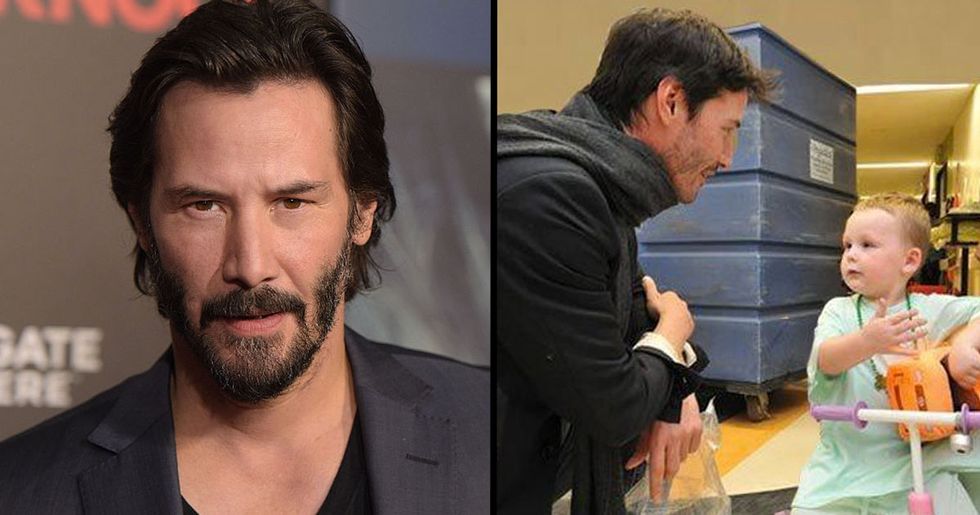 Celebrities lead a life very different from our own, ones often filled with opulence, splendour and hedonism. So it makes sense that once in a while they may want to give something back, as a way to humble them to the cruelties of the wider world. Many of them do this through various forms of charity, either becoming deeply involved with one or even starting one themselves. J.K. Rowling for example founded her own children’s charity called Lumos, which helps to aid sick children and children left without families or parental guidance. But recently it was also revealed that John Wick star Keanu Reeves has also been a very charitable man for the last 15 years.

We all know Keanu Reeves.

If you say the name Keanu Reeves, 9 out of 10 times the person you’re talking to will know who you mean.

He had his humble beginnings.

Reeves began his notable career by playing the role of Ted Logan in the Bill and Ted movie franchise.

From there he took a more serious path.

Following the success of those comedic movies, Reeves also then went on to take a more serious path in his career, focusing on more dramatic roles.

This lead to mixed reception.

And this decision lead to a mixed reception from his fans and critics, with some considering his serious acting to be wooden and stale.

He also can’t do accents.

His English accent in Bram Stoker’s Dracula, directed by Francis Ford Coppola, is often cited as one of the worst accents to ever be performed in a widely released movie.

But he eventually found his niche.

But luckily, Reeves did find his niche within the Hollywood world with his roles in films such as Speed and The Matrix earning him respect and recognition as an action film star.

And action movies have been his bread and butter since.

Nowadays, Reeves is mainly known for his acclaimed performance in the John Wick films, where he plays a retired hitman who takes revenge against the men who destroyed his only memories of his deceased wife.

But it appears that Reeves isn’t only a decent actor.

Although his acting may have been questionable at times, it appears that Reeves himself is definitely a good man.

As it was revealed recently that Reeves has been secretly donating millions of dollars to a children’s hospital.

Something he has been doing for more than a decade.

Reeves began the donations through a foundation that he set up over ten years ago.

And he has been giving money ever since.

Wow! What a great guy!

But Reeves revealed this before.

Reeves had spoken about the donations before. Back in 2009, Reeves spoke to Ladies Home Journaland went into detail about the foundation.

But it was forgotten.

For some maddening reason, this detail of Reeves’s life was left forgotten by the media until it was eventually re-discovered.

You know what that means?

That means that Keanu Reeves has been giving millions to the care of children, and to cancer research for over 15 years.

And again, we forgot about this?

It's hard to believe that this part of Reeves’s life was forgotten.

As it shows a truer and genuine side to the actor.

With his hard life and questionable film projects, the news of Reeves’ charitable work has shown us a whole new side to the actor, one that is both surprising and humbling.

Reeves is also notorious for leading the simpler life.

The fact that he donates so much to children and their well-being is made even more outstanding when taking into account the way Reeves chooses to spend the rest of his days.

Only spending his riches when needed.

Compared to his Hollywood peers, some of whom spend their millions on shallow and eccentric items, Reeves can be said to lead a simpler life.

Not a life of excess.

Reeves is known as being frugal with money and only lives in a modest, compared to other Hollywood stars, $4 million dollar two-bedroom home.

He also doesn’t flaunt his wealth.

Reeves is also known not to flaunt designer items or clothing and has been spotted riding the subway on numerous occasions.

His charity could come from a personal place.

However, it seems that Reeves actually has a personal reason behind his heavy donations to children suffering with cancer.

As someone he loved also had the disease.

During the 1990’s, Reeves’ sister, Kim, was diagnosed with Leukaemia.

And she kept fighting to survive.

Kim fought with the disease for nine years, never giving in.

She also saw her brother as her motivation.

Having survived the ordeal, Kim looks back at that phase of her life with fondness, citing her famous older brother as her main supportive unit during that turbulent time.

Reeves himself has stated that he believes Kim to be the strongest person he has ever known. Citing that his film career is nothing when compared to her strength and bravery.

I think we can all agree that Reeves has proven himself to be the best brother in the world.

Reeves has not spoken about his charity work since 2009.

Although news of Reeves’s donations has struck the internet, Reeves himself has not yet spoken about nor acknowledged it.

Proving that he prefers to lead a quiet life.

It seems that like his character, John Wick, Reeves prefers to live a quiet life outside of the media’s spotlight.

He’ll do what he does.

I think we can assume that Reeves will remain silent on the matter while still donating every year.

I think we can all thank Reeves for his amazing work.