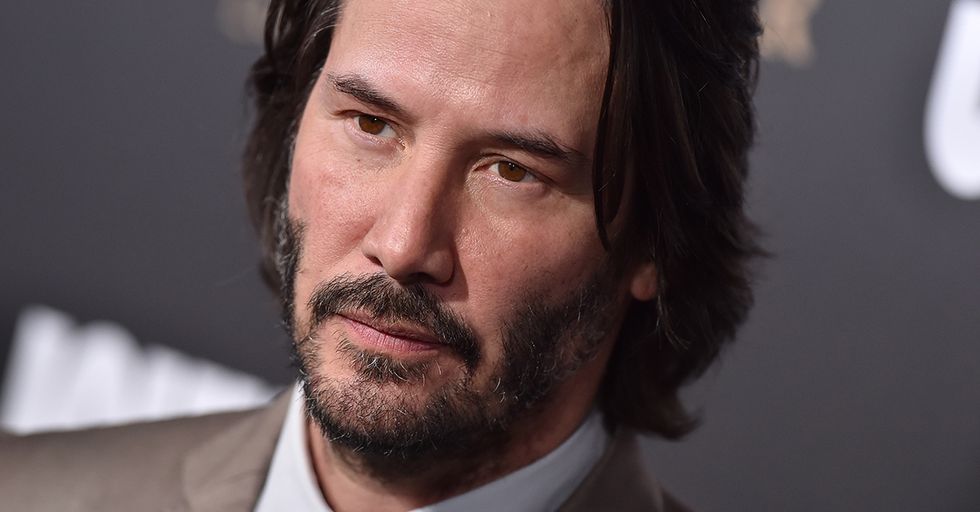 Just 40 Photos of Keanu Reeves Being the Internet's Favorite Celebrity

They say you should never meet your heroes because they might let you down, but that couldn't be less true when it comes to Keanu Reeves. In an era where we're constantly asked to decide between our favorite TV shows, movies, and songs and the horrific, rotten people who create those exact TV shows, movies, and songs, Keanu Reeves proves again and again that not all celebrities are nightmare men.

We're talking about a man who went on stage at massive video game conference E3 and told the audience that they were "breathtaking," a man so beloved he was added to the next SpongeBob movie, a man who has an age-appropriate girlfriend as a man in Hollywood.

Maybe it shouldn't be surprising, then, that an entire subreddit has popped up celebrating Keanu's awesomeness. Entitled /r/KeanuBeingAwesome, the sub-features photos of Keanu's many nice moments captured on film.

He still loves his mom?!

Look at this guy, still waving at his mom from the TV after all these years of being famous. Just goes to show you — you can murder 100,000 people in movies and still be a sweetheart.

He takes extra time for a fan in a wheelchair.

This is such a thoughtful thing to do for a fan. Keanu knows how to make these meet-and-greet events special for absolutely everyone who attends.

He's still willing to be a dork.

Just think of how easy it would be for Keanu Reeves, action superstar, to give a stone-cold look into the camera and rush this fan through. But he guesses what would be the most fun pose he could make, and does it for her.

This is Keanu filming stunts for John Wick 3. Obviously there are pads all over that green-screen set, but my guy is still willing to be dropped and take those big falls.

Still wacky after all these years.

If a young Keanu Reeves was like "Of course I won the Most Desirable Male award. I'm Keanu goddamn Reeves," it'd be understandable. But he's always been so humble that he describes his accomplishments (both real and internet-bestowed) as "wacky," and not "obviously deserved."

Imagine going to John Wick 3 and running into John Wick himself. And you have to think Keanu knew this would be a big deal for these folks when he went out that night and bought his ticket, right? It's like, in real life, he's going on specific missions to make the people who like him happy.

Gotta get it right.

Even though my man looks busy as hell, he hears that the fan who just snapped a selfie with him didn't quite get all of it, and what does he do? He goes back. Truly, a prince among men.

If he wanted to be, Keanu Reeves could call up his Powerful Hollywood Agent and be suspended from the ceiling to watch Ali Wong at whichever angle he deemed most comfortable. But he doesn't. He just acts like a regular man. Inspiring.

But he doesn't back down.

Keanu took it to Between Two Ferns host Zach Galifinakis. This shows us that Keanu's not acting nice because he's facile and can't stand up for himself — he's nice because it's what he truly wants to be.

That is a lot of dollars.

But Keanu is good at keeping it all in perspective. He knows he's but a simple entertainer, and remembering that fact may be what keeps him so grounded as all his fellow celebrities let their heads inflate like hot air balloons.

This Kimmel interview was an adorable Keanu goldmine.

Who can't relate to this? I too spent the first 127 dollars I earned, buying two N64 games in one day.

A Keanu-being-awesome sighting in the wild!

Keanu Being Awesome when he stopped by my work to take a tour and let us look at his badass bikes. Genuinely enjoying everyone he talked to. - NutAllergy21

Only half the story.

Listen, I don't care what you say — Keanu Reeves absolutely found that woman after the show and gave her a cute little peck on the cheek. That's just what happened, and you can't change my mind.

This is how we all feel about our guy.

Wow, this man is smitten. How many people in your life can cause you to instantly feel better just when they walk past? Keanu Reeves is magic.

You have to respect his passion.

A lot of actors are just out here collecting a paycheck. Keanu? He loves his work. That is so endearing.

Here's Keanu just straight-up making a man's day. For us, we've seen him do this for dozens of people, but for that one guy, this became a day he'd never forget. That's the power Keanu wields, and thank god he wields it kindly.

A good man doesn't shout his good deeds from the rooftops.

Keanu had this to say about his private foundation: [It's] been running for five or six years, and it helps aid a couple of children's hospitals and cancer research. I don't like to attach my name to it; I just let the foundation do what it does.

See, the type of people who can brighten the day of others cannot be so tuned out that they are unable to have their own day brightened by others. Keanu is giving with his affection.

He is so powerful.

What's crazy is that this is an official stat. Yeah, wow, crime was eliminated, and we haven't had any crime since. Pretty cool thing for Keanu to do (even if it took him a while...).

To think, one day Keanu could be on your plane.

Here's some evidence that Keanu is just a good person, beyond being a good celebrity. This mom met a man in the airport and, when she ran into him in the hotel, still liked him... even without knowing he was famous. He made an impression not just as an actor, but as a man.

Keanu has turned water into wine. No wonder all us internet folks have been worshiping him.

Keanu makes everyone around him cuter.

After filming a wedding scene with an actual priest in Francis Ford Coppola's Dracula, Keanu and Winona Ryder might, in fact, be legally married. But they're both so cool about it that now Winona calls Keanu "husband," which is still more evidence that Keanu adds a silly sweetness to the life of everyone he comes into contact with.

He took a minimum of four pictures with movie-goers. This is a man who is wildly giving with his time.

SpongeBob is an incredible judge of character.

With a new SpongeBob in development, they're not just calling any old actor in to do a live-action cameo — they're calling in the man himself, Keanu Reeves. It is a well-deserved honor.

What an incredible thing to do for wounded veterans, a group all too often overlooked by society at large. Now some of them get to hang out with Keanu as he returns to one of his most iconic roles.

Hopefully he gets knighted pretty soon.

Here we see Keanu in the UK's Parliament, proving that he is invested in world goings-on and wants to see Parliamentary Democracy — the best kind of Democracy — up close.

Important to remember — while you may select a "Best Man" for your wedding, Keanu Reeves can show up at any time and take that title, as he is, technically, the best man.

This is what makes him happy.

Look at that grin, all because he gets to help out some cute kids. I only grin like that when I'm next in line at Chipotle.

There is no more tiring place to be than the airport. The fact that Keanu is still putting in the effort for his fans while he's there proves that he is our most precious resource.

This is just textbook good person — here we have Keanu Reeves dropping some money in a homeless person's cup. You can just tell, from this picture and all the rest we've seen so far, that he legitimately enjoys helping people.

This is too much. What a lovely framing of the single most terrifying concept we'll ever have to process, that not a single person, of any faith or creed, could argue.

He's even chill when trespassed upon.

This Reddit post provides the backstory on this photo: Fans trespassed on Keanu's property back in the 1990s. Instead of calling the police, he had a beer with them. - unknown_human

And he's looking out for others.

They say the best thing that people in positions of power can do is to pull others up with them. The idea that Keanu would parlay his enormous success with the John Wick franchise into a vehicle for a female action hero to get some much-deserved spotlight really speaks to his character.

Do you think anyone would listen to this sign if it read "Leave driving fast and furious to Vin Diesel"? No it would not, because we don't love Vin Diesel like we love Keanu.

When we carry around anger and hostility, it breaks our bodies down from the inside. Keanu Reeves shows that living life in a light, happy way can keep your body in great shape.

He passes on his skills to others.

For his myriad action roles throughout the years, Keanu's had to learn how to defend himself. How does he use those skills then in other aspects of his life? He teaches reporters how to defend themselves. This guy, I swear. Always giving.

Another canonical example of being a good person, here we see guerilla footage of Keanu Reeves giving up his seat on the subway.

What's especially nuts is that Keanu didn't buy that sauce; it just materialized because he deemed it to be so.

He's willing to engage, even as he's going home.

How easy would it be for a celebrity as famous as Keanu Reeves to get tired of their signature catchphrase? But Keanu knows how much it would mean to get some acknowledgment for this sign-maker, so he takes even more time out of his day to make it happen. What a guy.

Which Neo is The One?

Beyond being adorable while taking a picture with a baby, this picture here shows Keanu meeting two of his namesakes — the baby is named Neo, and the man is named Konstantin.