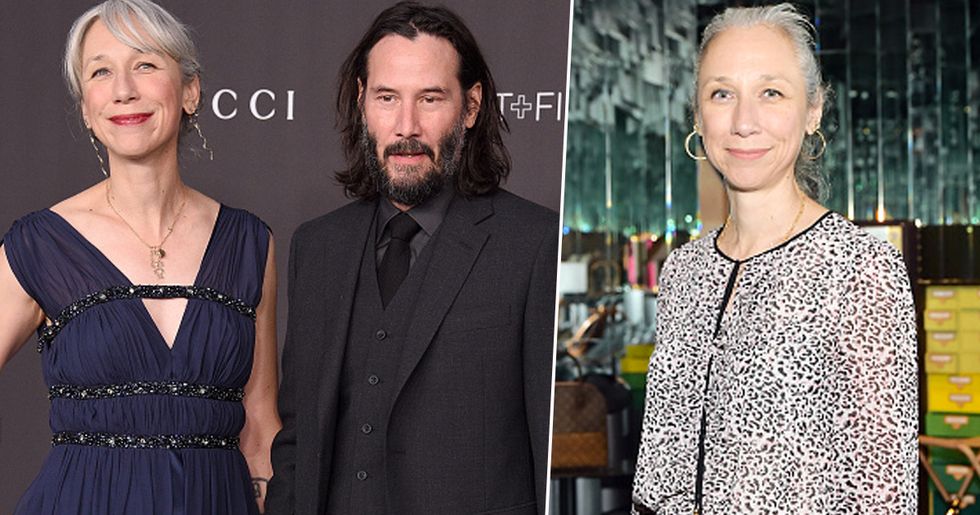 Keanu Reeves has been through a lot; he's killed a vampire king, he time traveled while stoned, he's saved a bus full of people, he's survived a hit from the criminal underworld, he tried his hand as a Samurai, he was a ragdoll participant in one of Phillip K Dick's nightmares, he was Buddha, he's saved the world at least four times, and he's discovered reality to be an anesthetic simulation by dystopian robot overlords - who would've thought that after all that, he'd still be such a nice dude?

Well now, his longtime girlfriend Alexandra Grant has finally opened up about their relationship.

Keep scrolling to see what she said.

You may know Keanu Reeves as the fresh-faced stoner/time traveler from Bill and Ted’s Excellent Adventure.

Or as the latex-clad "chosen one" from The Matrix trilogy.

Or you may know him for his "English" accent in Bram Stoker’s Dracula.

This is probably the worst accent in the history of cinema.

You’d think that all that money and fame would sour Keanu.

You’d think, having accrued a personal fortune, that Reeves would become selfish and paranoid, as many celebrities do.

But you’d be wrong.

Here are some of the kind deeds that Keanu has become known for.

He sticks up for the crew.

Before The Matrix’s second and third installments hit the screens, Reeves signed a deal that gave his profit sharing points to the special effect and costume design departments.

"For a long time in Los Angeles when I first moved there, when I was 20 years old, it was such a new world and so I saw some guys at a gas station once who had hockey equipment in their car, and I asked them what they were doing, and they said they were playing street hockey, so I asked them if I could play".

He's been playing ever since. Aw!

He doesn’t mind laughing at himself.

In 2010, a meme emerged of Keanu Reeves sitting on a bench with the tagline "sad Keanu". But he revealed that he "thought it was funny," the meme-lord's heartland.

While working on the movie, Chain Reaction, in which he starred alongside Morgan Freeman, Reeves bought the stagehands a free breakfast every day in the last weeks of filming.

He rewards his stuntmen for the risks they take.

Reeves admitted on Jimmy Kimmel that he was still grateful for a teenage acting role in Canada that paid him $127.

He set up a private foundation in the wake of his sister’s leukemia diagnosis.

According to Snopes, in an interview with Ladies Home Journal he said, "I have a private foundation that’s been running for five or six years, and it helps aid a couple of children’s hospitals and cancer research… I don’t like to attach my name to it, I just let the foundation do what it does".

He still takes the Subway.

He’ll take a pay cut if it means that the movie will improve.

In a Reddit "ask me anything," Reeves wrote: “You know, I've been very fortunate in my life, which I am grateful for. And I guess it's just to my tastes to keep life as simple as I can".

He once gave a struggling worker on the set of The Matrix $20,000 dollars as a bonus to help him to get back on his feet.

That same worker also wrote that, "He also was one of the only people on the set that genuinely wanted to know peoples names, would say hello and mean it, and would talk to people as they were his peers and not below him just because they were practically making nothing to build a set".

And he drove a stranger fifty miles out of his way.

This is the testimony from a Redditor…

"A friend of mine told me that she was once stranded on the side of a highway outside LA when her jalopy broke down. She had no cell phone (that was before most people had cell phones) and no way to call for help…".

Then a car pulled up…

"Then a nice black Porsche pulls over and as you can guess, it was Keanu. He tried to help her jump start the car and when it didn't work, he called AAA for her".

She hoped that he would hit on her…

She told me that she hoped he would hit on her but he didn't, he was just a gentleman. He dropped her at her house, gave her his phone number, and told her to call him if she needed further help.

Now for a countdown.

Now you’re all caught up in Keanu, it’s time for a countdown of my top five favorite Reevesian moments.

Keanu, inexplicably, was cast as Siddhartha.

This film is... terrible. But at least they got the casting right.

His moment with Sandra Bullock.

And this moment is one to remember...

If you're still not convinced that Keanu Reeves is the most wonderful human being on the planet, get a load of this.

Ladies of the internet have been sharing pics that they've been lucky enough to take with Kenau.

And there's something similar (and incredibly endearing) about them all.

In each of the pictures, Reeves keeps a respectful distance from each of his female fans, careful not to place his hands on their bodies.

Okay, so @KemziLinzi seems to think that this is a tactical move by Reeves.

But if this article has proven anything, it's that Keanu Reeves is a great guy and I personally think that his habit when taking pictures with ladies is one borne out of respect.

But this one moment may have stolen the spotlight for the cutest Keanu Reeves moment ever.

On one of the biggest night's in the film calendar, the nicest man in Hollywood decided to bring his mom, Patricia Taylor, as his date.

And they strutted their stuff on the red-carpet...

Dressed in an off-white two-piece, his mom definitely stole the spotlight this time!

That double-breasted blazer is everything!

I'm not too sure about those shoes, but you know what? Patricia Taylor is the only woman who could make them look that good.

And of course, Reeves himself looks amazing.

This night is going to go down in Oscar history, and we're glad Keanu Reeves and his mother will be able to witness it together.

I can only imagine it'd be pretty incredible. What could possibly go wrong with a legendary guy who's an incredibly nice dude?

Well now his girlfriend has spoken.

After coming public with their relationship, artist Alexandra Grant revealed they had been in a relationship for years.

She also revealed that everyone she knows called her after coming clean. She explained:

I think every single person I knew called me in the first week of November, and that's fascinating. But the question I've been asking in all of this is: 'What is the opportunity for good?

Congratulations to the happy couple.