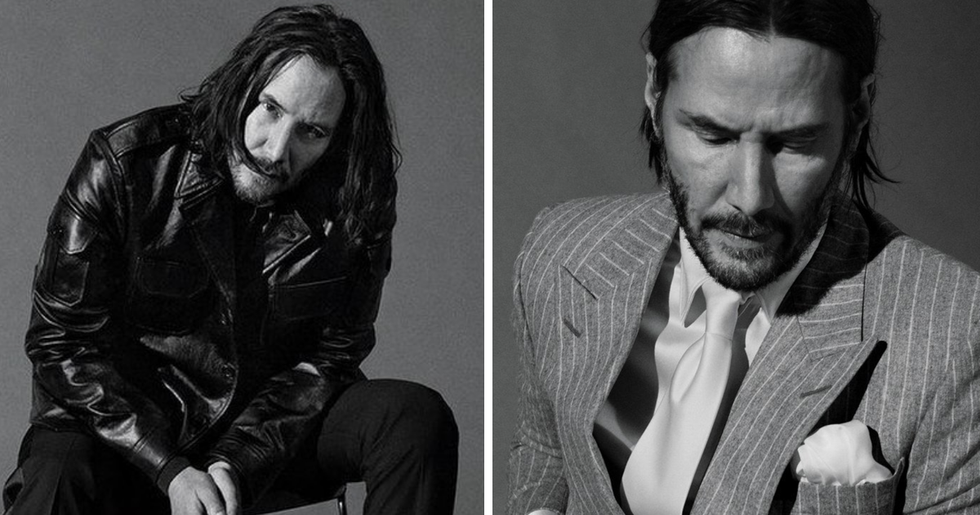 Some know Keanu Reeves from The Matrix, others know him from Speed. But everyone agrees that this man is as good-looking as he is lovely. We just can't help but love Keanu and there's no doubt left to be had, Keanu Reeves is the nicest famous millionaire there is.

A few days ago, GQ published a new interview with Keanu. It was accompanied by a set of black and white photos of Reeves in a classic suit. In the interview, the actor really let us get to know him. He discussed his new movie, his "loner" lifestyle, and his reclusive personality. He also talked about the time that he was in "movie jail" for ten years.

But it wasn't his personality that the whole of Twitter was swooning over when the article came out.

It was his truly remarkable good looks. Especially considering that Keanu is fifty-four!

Read on to see the photos and the steamy behind-the-scenes video that inspired his fans' R-rated tweets.

"Keanu Reeves has been doing slow-motion backbends into our hearts since the ’90s," says Jenna Amatulli, HuffPost US.

And he did exactly that once again in a new set of GQ Magazine photos that he's posed for recently.

The photos accompanied a brand new interview with the actor.

He opened up about the upcoming third instalment of John Wick, his "loner" lifestyle, and the mystery that is Keanu Reeves. We finally got to find out what Keanu is really like (as well as to admire his strikingly good fifty-four-year-old man looks).

It's worth noting that during his photo shoot, Keanu was sick.

GQ's Alex Pappademas noted that his cough sounded "like somebody punching their way out of a paper grocery bag." Poor darling.

"The Legend of Keanu Reeves."

Who is this actor that rapper, Logic, named a song after?

Even the sun, when Keanu is cold, "comes out, as if it, too, wants to make sure Keanu is warm enough."

In short, Keanu Reeves is a simple guy who just happens to be a millionaire movie star.

While some celebrities move houses every few years, Keanu lives in a Beverly Hills house that he's owned for nearly twelve years now.

And he sometimes thinks about the fact that he'll probably die there, too.

"I didn't think about that when I was forty," he said.

He still has the same patchy beard and long hair that he's had for years. And we're totally okay with it.

When he and Pappademas sat down at Chateau Marmont for the interview, Keanu ordered a BLT, a Coca-Cola, and fries instead of a salad. A man after our own hearts.

Keanu Reeves is known for his "nice guy" behavior and there's plenty of evidence to support it.

When asked what he thinks about people making memes of him, he said that taking part in that kind of thing isn't really for him, but he doesn't judge those that do that kind do thing.

"People doing dances, people doing mannequin stuff or whatever - those people, they look like they're having fun and doing some cool shit."

And remember when, not long ago, Keanu was stranded in Bakersfield with a handful of strangers after their plane made an emergency landing?

Instead of getting a private car and leaving the rest of the passengers to wait for the next flight, he rented a bus and invited them all on a road trip with him.

Pappademas says Keanu is "determined to act like a normal person," even when everyone on the streets treats him as a celebrity.

But not everything comes easy for Reeves.

Ever heard of a "movie jail?" Well, according to GQ, it's a thing, and Keanu's had a taste of it.

He was "blacklisted" by Fox for a decade after he turned down Speed 2 for an onstage role of Hamlet in Winnipeg, Canada.

"I didn't work with [Fox] again until The Day the Earth Stood Still," Keanu admitted.

But the success of John Wick proves that Keanu Reeves' name still has power when it comes to securing financing for action movies.

Keanu says that he never imagined himself still doing such physically-demanding roles at the age of fifty-four.

But that's only because he had no idea what kind of roles he would be in at that age.

"I haven't really thought about my career future, or what was going to happen, until really recently," he says.

When asked about what prompted such thoughts, Keanu said cheerfully, "Death."

He didn't say whose death it was that prompted such thoughts, though.

Was he thinking about his loved ones that had passed away, or was it his own death he wondered about? Either way, we're amazed that he can fit such deep thoughts into his busy schedule at the moment!

He's paid a regular guest star's wage, arrives to set on his bike, and doesn't even have a trailer.

"He's quite a funny guy, and that's not [the roles] he gets in movies and stuff," says Keanu's co-star Peter Stormare.

"He's a really great comedian. He reminds me of Timothy Hutton sometimes, and Dylan McDermott."

"I only have good things to say about him. Once a year, we'll have a beer together and talk about life and things."

Peter also adds, "He's very private. He leads his life the way he wants to lead it. And I guess it can be lonely sometimes."

"But I think he's just like me. There's a comfort in being alone sometimes, especially when you're working on something."

Keanu is also "the world's most famous aging indie-rock guy." "He is probably the only billion-dollar-grossing movie star to have once listed Steve Albini's confrontational '80s noise-terror band, Big Black, as a current fave," Pappademas writes.

When Pappademas reminded Keanu of this, the actor let out "a quiet nonverbal dinosaur howl" and did "a little Ted Logan air guitar."

Keanu's well aware of his "out-of-touchness."

"There've been times I've mentioned something," artist Robert Longo says, "and he all of a sudden takes this stupid thing out of his back pocket and writes down notes, like some book I read or something like that."

"And I know that the motherfucker is actually reading that! He's going to find that book and read it, I know it," he adds. That's who Keanu Reeves really is. But weirdly enough, it wasn't his incredible personality that fans talked about on Twitter.

It was the GQ photos and his unbelievably good looks as a man in his mid-fifties that they just couldn't get over.

They really took their "compliments" to the next level. Like JustYvonne, who tweeted, "I just wanna be one of his motorcycles for a day or two," referring to Keanu's love of riding motorcycles; he even owns several of them!

Ladybuglizzie said, "He ages like fine wine. ❤️❤️❤️". And we have to agree.

Gabrielleleigha on Patreon said: "Hmmm, I could think and stuff before I saw this, but no, brain not working now." Us too.

Alex H: "Many shades of Reeves." Now that sounds like a movie we'd be up for watching.

Nichole ??: "I want to make Keanu a steak and have him drink red wine from my lips." - probably our favorite reaction to the pictures, Nichole.

Sepulminka: "I NEED MY INHALER."

Viva Vanessa said, "Keanu is the boho murder daddy that I would like to have if I was into that." Actually, maybe that one's our favorite.

Sofa Coca-Cola: "Good morning to Keanu Reeves aka the only Virgo man that matters."

Finally, Twitter-user, Bryan wrote: "‏Jesus this man is sexy without even trying. But then that is part of what makes him so sexy... he just is." We're totally with you, Bryan.