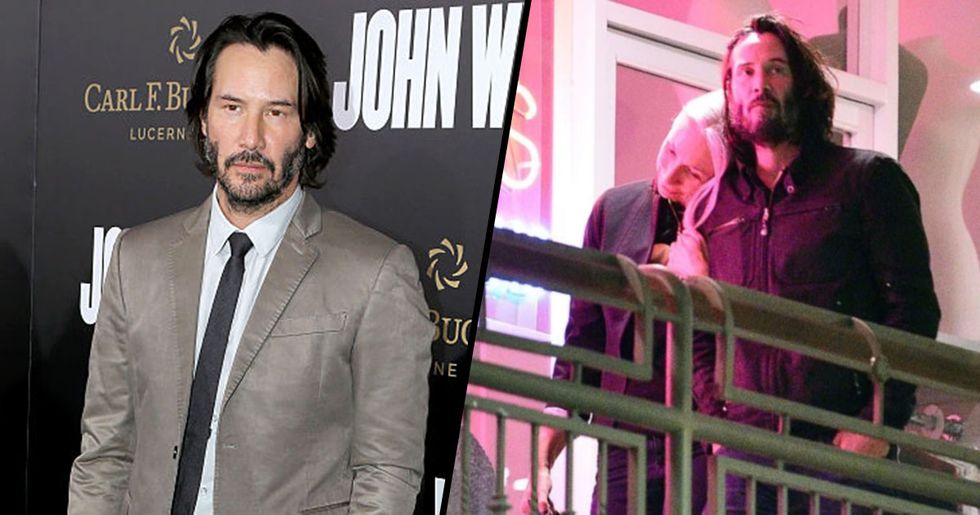 His latest red carpet appearance has got everyone excited - because he's finally gone public with a girlfriend! Hilariously, some shortsighted fans of Keanu initially thought that his artist-girlfriend, Alexandra Grant, was actually another famous face - Helen Mirren. Scroll on for this pics - do you see a resemblance?

Keanu has been being uncharacteristically open about what's going on in his love life of late. And now it's been revealed how Keanu fell for his new love. The story is just too cute.

Bill & Ted's Excellent Adventure (1989) told the story of two slackers traveling through time. It was so successful that it was followed by a sequel: Bill & Ted's Bogus Journey in 1991.

But that's all set to change in the coming months as Reeves will be starring in the third part of the John Wick franchise, Parabellum, out this month.

But some fans noticed something weird about the images.

In fact, the snaps of Keanu walking the red carpet with Grant caused some to do a double-take.

Because some thought they recognized Reeves's new love.

It's not just the shining silver hair the two have in common, either.

The two do pair more than a striking resemblance to one another.

Looking at both of their faces, we can sort of see why people got confused.

And people had a pretty surprising reaction.

Many thought Reeves and Mirren were dating - and were strangely all for the slightly odd relationship.

It seems some were genuinely confused.

Perhaps some of Keanu Reeves's fans are a little bit shortsighted - or have a condition where they see every grey-haired woman as the same?

But others had this reaction.

Well I for one am very disappointed that Keanu Reeves is not going out with Helen Mirren which is who I thought it… https://t.co/j8ApyQuBLU
— Lorraine Boylan (@Lorraine Boylan)1572972581.0

After initially believing in the Mirren and Reeves relationship, some were sad when they discovered it was not the real deal.

She's been with famed director Taylor Hackford since 1997, and in spite of her crush on Jason Momoa, the pair look set to go the distance.

But some have had this reaction.

Are we, as a society, so unaccustomed to seeing an older woman rock her gray hair that we just start to think they all look the same?

Or is it not that deep?

Either way, we can't wait to see how Helen Mirren responds to the mistake. We bet she'll be more than a little flattered.

"She is kind, warm and spiritual, and she is a great communicator." Only the best for the internet's favorite man. We wish them a very happy future together!