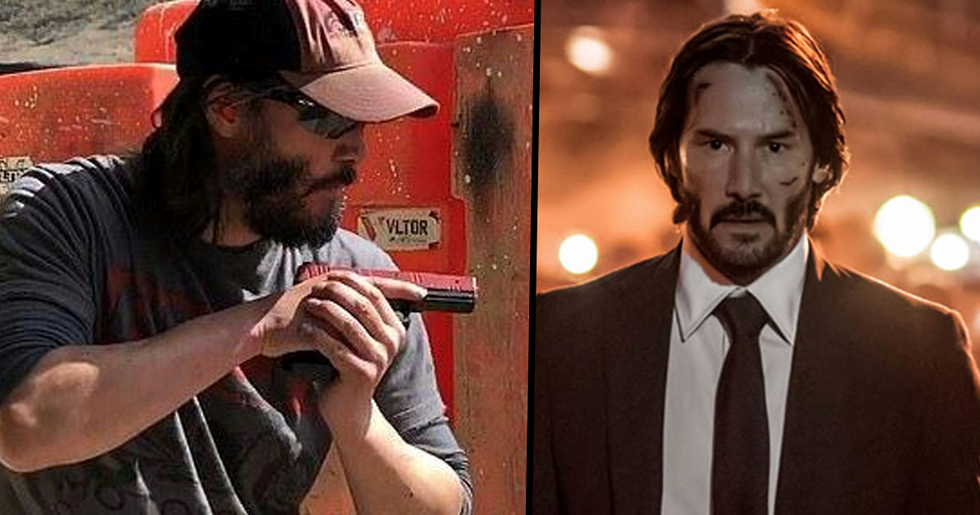 As if we weren't excited enough about the final instalment of the John Wick neo-noir thriller franchise, Keanu Reeves has just revealed that he hired a Navy Seal to help to get him as ripped as possible for the concluding film. We'll pause for a moment while you digest this.

Shawn Ryan, a Navy Seal who owns Vigilance Elite, shared a video on YouTube of Keanu joining in on one of their training sessions. And believe us when we tell you, it's worth a watch.

And if that wasn't enough, we've also located a video of the gorgeous Halle Berry training her ass off with Keanu as well.

So we've prepared a treat for all you men as well as us ladies! Enjoy!

As much as we love real-life Keanu Reeves...

And believe me, we really do - with a beard, without a beard, either way, he is one sexy mofo.

There's something about him as John Wick that just has us mesmerized.

Is it the mean look in his eyes? The "I've got nothing to lose" attitude? We all know just how much us girls love a bad boy...

Obviously, we loved the first John Wick movie which was released in 2014.

But it was massively successful, grossing $88.8 million worldwide and holding an 87% approval rating on Rotten Tomatoes. That's a definite seal of approval if ever there was one. We're sure that Keanu's brooding good looks may have helped a little, too.

John Wick had lost his wife to a terminal illness and was given a beagle puppy called Daisy to help him overcome his loss. As you would expect, Wick bonded with the puppy. Light at the end of the tunnel etc...

But his happiness is short-lived.

So the Russians follow him to his home later that night.

They knock him unconscious, kill Dasiy and steal his car. We know, we were shocked too! What had the poor puppy ever done to them?

We'll forever have the epic scene in which Wicks single-handedly murders a twelve-man hit squad imprinted on our minds. He's the dictionary definition of a bad-ass.

Director, Chad Stahelski, and Producer, David Leitch, were heavily influenced by anime and martial arts films when they made this movie and they used both fight choreographers and gun-fu techniques when shooting the fight scenes. And you have to admit, the results were amazing. And if you love a ninja fight, wait until you see the video of Keanu on the set of John Wick 3 a few slides down . . .

Stahelski and Leitch had both previously worked with Keanu on The Matrix trilogy.

And we all know how epic the fight scenes were in these films, too. In fact, Stahelski and Leitch worked as stunt co-ordinators and stunt doubles on these films.

Anyway, back to the movie. There's a fair bit of ambushing, a little bit of capturing, and more killing, as you would expect from an action-thriller.

But we never doubted John, not for a moment. Not least because we knew that there were two more films to come.... we were pretty sure he was going to come out of this one alive and well.

Wicks walks off home - wounded but alive - with a new friend in tow. It's a Pit Bull puppy that had been scheduled to be euthanized. Ahhhh. We love a happy ending!

But this wasn't the end of the story of John Wick.

This installment was even more successful than the first.

It grossed $171.5 million worldwide! Film reviewers loved it too, which isn't always the case with sequels.

What we loved most about this film was that it also starred Laurence Fishburne.

It was the first time we had seen Keanu and Fishburne actor together since The Matrix trilogy. If you haven't seen it yet, you won't be disappointed seeing these two back together again.

Anyway, Chapter 2 follows Wick as he goes on the run after a bounty is placed on his head.

And of course, many attempts on his life are taken and, although he is badly injured on one occasion, he lives to fight another day... again. As does his dog. Although the bounty on his head has been doubled to $14 million at this point. Oops! Another fairly bad day at the office for John Wick then.

And of course, the final instalment of the movie franchise was teased...

Wick warns that he will kill whoever tries to come after him next. Ooh, we can hardly wait!

But thankfully, the final installment John Wick: Chapter 3 - Parabellum is being released on May 17th this year!

We literally could not be any more excited about this. Keanu returns as the ruthless John Wick, who is still on the run, but this time he has help...

Help in the shape of the stunning Halle Berry.

Berry plays another hitman - no... hitwoman - who is one of the few people to still trust John.

And they have so much in common.

Well, two things at least. They both enjoy killing, and they both appear to love dogs. In fact, Berry's character has a whole pack of dangerous dogs that seem to do whatever she says.

Halle herself trained pretty damn hard for this role, too.

Not that she's ever been in bad shape in her life, but it's nice to know that she took the role as seriously as Keanu did. Halle, we salute you. That looks like pretty hard work. We think we'll just lazily watch the movie from the comfort of our sofas, though, if you don't mind.

Laurence Fishburne stars in this instalment, too.

And, of course, Wick's dog returns for the final time.

We mean, it wouldn't be a John Wick film without his dog. And the trailer certainly implies that the Pit Bull will feature heavily in this instalment of the trilogy.

And in case you haven't already seen it...

Here's the exciting trailer in all its glory!

Quite a lot of action, as you would expect from this franchise.

Even though Keanu is in pretty fine shape for a fifty-four-year-old (pretty damn fine!), that doesn't mean that he didn't need a little extra help to get as ripped as possible for this movie.

He decided that a little Navy Seal training was in order.

He decided this so he could not only work on his fitness and physique (not that we think he needs it), but also to finesse his gun-handling skills. Because, if you didn't know already, Keanu does all of his own stunts. Impressive, we know!

The training itself was with Vigilance Elite.

Who train some of the fittest officers in the world. And we're sure that the training will come in handy for his many scenes battling ninjas in the final instalment.

Why not see for yourselves?

Here is Keanu filming several stunt scenes and, as always, giving it his all. We love you, Keanu!

Now let's see him in action at one of the tactical training sessions.

As we expected, he is both a badass and a gentleman. As if we would expect anything else from the humble legend that is Keanu Reeves. Roll on May 17th!