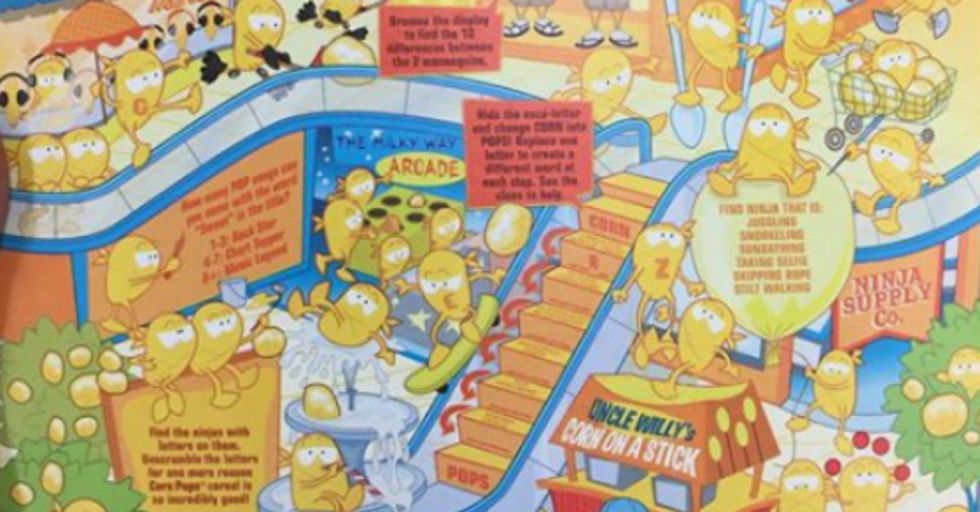 Imagine sitting down to a bowl of cereal for breakfast and then BAM! Racism.

Now, that may seem a touch dramatic, but it's not too far off from what one man noticed in the cartoon on the back of his box of Corn Pops. Once you see the cartoon, you might agree with him.

Here's the cereal box in question. Can you spot what's offending people?

The cereal box cartoon depicts a bunch of anthropomorphized Corn Pops hanging out in a mall. The yellow Pops are busy playing arcade games, sliding down banisters, and jumping in the water fountain. But one Pop looks a little different.

As Twitter user Saladin Ahmed pointed out, there's only one brown Corn Pop, and he also happens to be the janitor at the mall.

hey @KelloggsUS why is literally the only brown corn pop on the whole cereal box the janitor? this is teaching kids… https://t.co/5AKXJ2jgr3
— Saladin Ahmed (@Saladin Ahmed)1508857335.0

While all of the yellow Pops are having fun at the mall, the brown Pop is waxing the floors. Weird, right?

Ahmed acknowledges the fact that a cereal box cartoon may seem like such a small thing to worry about, but he has a good point:

yes its a tiny thing, but when you see your kid staring at this over breakfast and realize millions of other kids are doing the same…
— Saladin Ahmed (@Saladin Ahmed)1508857603.0

Kids absorb a lot of information from the world around them, and they repeat the things they learn and hear in their everyday lives (just ask any parent whose child has repeated some of their own salty language in public). It's not a huge leap for kids to see things like the brown Corn Pop cleaning up after the yellow Corn Pops and extrapolate that brown people clean up after non-brown people.

Kellogg's was quick to respond to the issue and claims the artwork has been updated.

@saladinahmed Kellogg is committed to diversity & inclusion. We did not intend to offend – we apologize. The artwor… https://t.co/qLEClPH8Yr
— Kellogg's (@Kellogg's)1508876810.0

Ahmed then thanked Kellogg's for their speedy response. Notice what didn't happen. Kellogg's didn't roll their eyes, mock Ahmed for being "so PC," or refuse to admit any culpability. They apologized for their content that was seen as harmful and changed it immediately. We should all be more like Kellogg's (modern-day Kellogg's, at least. Old-timey Kellogg's was all kinds of whack.)

This is how it's done, folks.

today I used the computer in my pocket to get a cereal company to make their boxes less racist what even is the 21st century
— Saladin Ahmed (@Saladin Ahmed)1508895182.0

In the 21st century, two parties can have a completely reasonable conversation about harmful content and easily solve the issue. Maybe by the 22nd century we'll eliminate harmful content altogether!