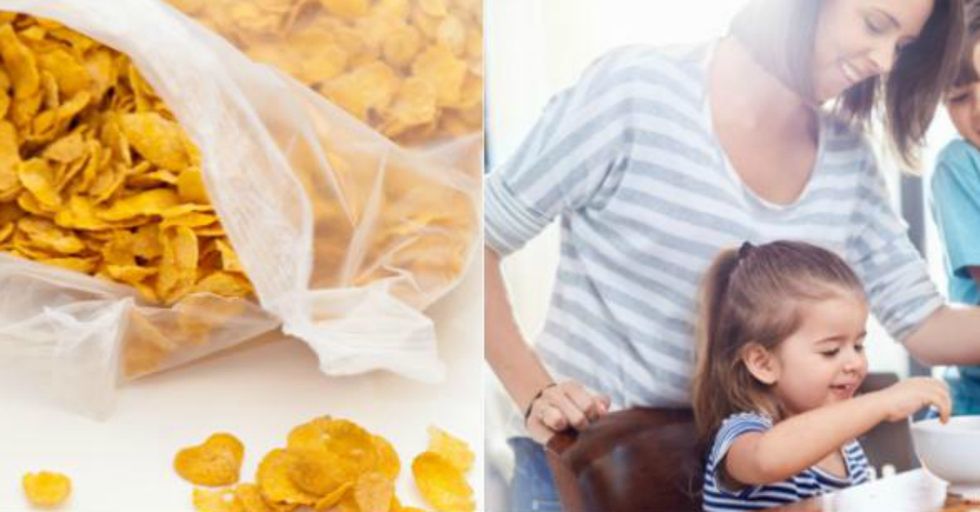 When it comes to parenting, food is easily one of the top priorities. It's not optional, and even if it was, kids literally never stop snacking, so the topic of what's for lunch, dinner, etc. is bound to come up about 300 times a day.

What they're begging to eat, however, is another story entirely.

Parents do their best to feed their kids a good balance of nutritional items and some junk food here and there, but when it comes to breakfast cereal, the line between the two gets a little blurred. And, love it or hate it, Kellogg's has just decided to make reaching for its beloved Frosted Flakes a sugary judgment call.

Parenting requires us to be all things to all small people.

If you can't say anything else about it, raising kids keeps parents busy. The minute a baby is born, moms and dads start wearing the hats of housekeeper, chauffeur, mediator, and about a thousand different things in between. Throw in diaper changes, money management, and teen angst, and we're honestly surprised they sleep at all.

But let's face it, figuring out what to feed kids every day is 90 percent of the job.

Parenting handbooks should just throw out all the other tips and let new moms and dads know the majority of their job will be feeding their kids from sun up to sundown. Whether it's three meals a day, or the infinite amount of snacks in between, parents are always hopping to the tune of seven little words, "I'm hungry. Is there anything to eat?"

So they do their best to find some balance in an unbalanced process.

Kids aren't the best judge of what's good for them, so parenting involves a lot of time invested in finding healthy meals their little ones enjoy. A balance of dairy, vegetables, proteins, and whole grains is the best plan. Cooking from scratch is always helpful, because then you know exactly what you're getting, and the search for nutritious recipes kids will actually eat is a constant mission.

The battle for nutrition isn't one parents win all the time. Between commercials for sugary snacks and overwhelming exhaustion that sometimes steers us into the McDonald's drive-thru for an easy dinner, doing the ultra-healthy option for every single meal isn't always a reality. Parents can't be perfect all the time, so less-than-perfect snacks are also part of life.

Nowhere is the health struggle seen more readily than at breakfast.

Where lunch and dinner can be a little easier for parents to drive home the importance of eating your veggies and fruits, breakfast is tougher. And it's easy to see why. The market for breakfast foods is saturated with Pop-Tarts, mini donuts, bagels, and last but not least, breakfast cereals.

Because they're a central part of breakfast, they tend to be regulated.

Breakfast cereals are about as American (and as sugary) as apple pie, and because of that, they're often watched closely by groups concerned with childhood obesity and helping parents get healthier options for their kiddos. In recent years, cereal companies have been making modifications to appease these groups and comply with government guidelines that recommend kids have no more than 25 grams of added sugar a day.

One cereal manufacturer is under scrutiny for its famous flakes.

Cereal titan Kellogg's is no stranger to sugar regulation and has been making tweaks to its vast line of products because of it. In great news for parents of kids who are fans of the breakfast cereals it produces, Kellogg's has reduced the sugar in its recipes by large percentages and is working hard to comply with health standards across the board. But there's one area where they refuse to budge.

It's a staple cereal that's not likely to change anytime soon.

If there's one thing we all have in common, it's that we grew up eating Frosted Flakes or, at least, seeing all the Tony the Tiger commercials for it. But this childhood staple recently came under fire for the fact that it's mostly sugar (10 grams per three-quarters of a cup serving). Anyone who's eaten it, kind of already knew that, but, still, the high sugar content prompted concerned health groups to try to get Kellogg's to modify its recipe. But while it was happy to make adjustments to its other breakfast items, the cereal giant said "no way" when it came to Frosted Flakes, which is one of its most popular products.

Without the sugar, there isn't much left.

In a bit of logic that's hard to contend with, Kellogg's maintains that if Frosted Flakes were drained of their sugar content, they'd cease to be Frosted Flakes. This theory was proven true when the cereal maker modified the recipe for a time and sales began to plummet, suggesting that consumers are buying it for the sweet treat that it is.

They also maintain that the ingredients aren't the only reason not to change.

While taking the sugar down in Frosted Flakes no doubt decreases its popularity, Kellogg's also says that there's another reason not to mess with a good thing. Looking toward its consumers, the cereal company says those who eat Frosted Flakes aren't, for the most part, kids. It's adults that are buying and eating the cereal at record pace, namely, millennials who grew up with it and love it. According to Kellogg's, adult Frosted Flakes consumers outnumber kids 5-to-1.

So if you're a parent, just know that the sugar content of Frosted Flakes may not thrill you, but at least Kellogg's will be offering other, healthier cereals as well. For the time being, those options are appeasing health groups and their concerns. Then again, if you're a millennial, you might have cause for celebration and just keep the coveted Flakes hidden just for yourself.