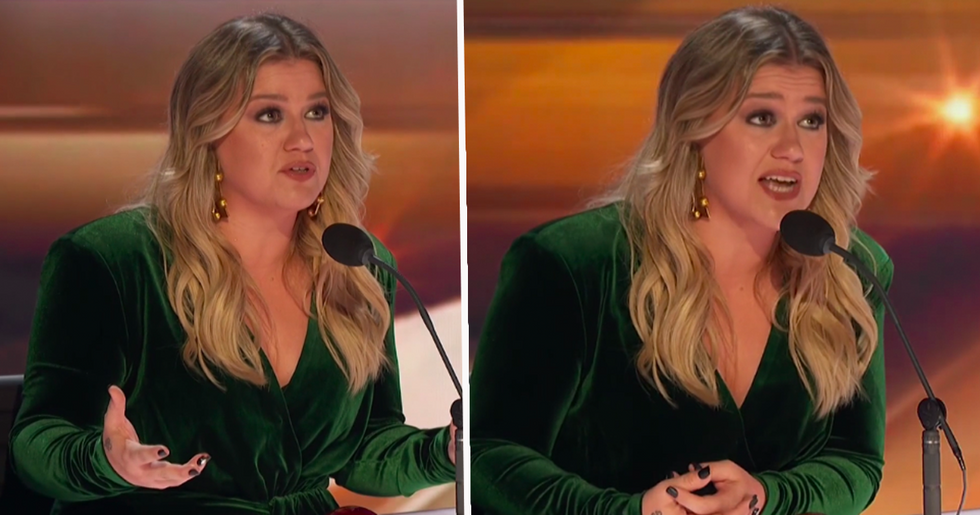 Kelly Clarkson has been slammed a lot of the year from her choice of parenting methods to her daughter's hair cut. And now she's in the spotlight once again.

Fans are furious after she 'made fun' of Sofia Vergara’s on America's Got Talent.

This is a very controversial move...

Kelly Clarkson's had quite a successful career.

From a singer, songwriter, to an author, she has done it all.

A woman of many talents.

Her most recent venture isn't too dissimilar to her previous role on The Voice.

As this time she is stepping in on America's Got Talent whilst Simon Cowell recovers from his broken back.

She has taken his role as a judge.

She will join alongside fellow judges Sofia Vergara, Heidi Klum, and Howie Mandel.

But the first show only aired this week and she has already angered fans.

After she mocked judge Sofia Vergara.

It's not the best start.

Sofia Vergara, an American-Columbian actress is known for her stunning looks...

But her career as an actress goes way beyond her natural beauty.

Sofia was raised in a Roman Catholic family - something that is very common in this part of Colombia.

Initially, she went on to study dentistry at a college in Colombia...

But after 2 semesters, she decided to drop out and pursue a career in modeling and show business.

She was first noticed at the young age of seventeen.

A photographer spotted her on a Colombian beach and she was quickly presented with offers for modeling work and television roles.

Her portfolio began to grow...

And it didn't take long for Sofia to be in high demand in the Colombian modeling industry.

Her brother, Rafael, was murdered by a group during an attempt to kidnap him. Not wanting to be caught in the unrest in Colombia at the time that resulted in the murder, Sofia decided to emigrate to the United States and she settled in Miami.

When she started her life in Miami...

But its safe to say that what we all know and love Sofia for...

Is her role in the hit sitcom, Modern Family.

Sofia's character has been a fan-favorite since the show aired in 2009...

And it's safe to say that her role as Gloria shot her to global stardom.

Sofia now appears as a judge on America's Got Talent.

She joined the team for its fifteenth season.

The show did pause filming due to the current pandemic but has since started back again.

Only this time, theres a different judge sitting alongside Sofia.

Kelly Clarkson has joined the team to fill the gap for Simon Cowell.

After news broke that he had broke his back.

But despite the first live episode only taking place on Tuesday night, Kelly is already in trouble.

The four judges, sat socially distanced, watched the acts either virtually or around the set.

Sofia gave the 12-year-old feedback on his performance, where she admitted that she 'hates' the instrument but was very impressed by the performance.

Sofia told the boy "I could listen to you forever. It’s amazing what you can do with that instrument," before Howie asked, "what instrument?"

And Sofia responded "The Ukulele."

Once it was Kelly's turn to give feedback she repeated "The ukulele" but with an accent.

Laughing and admitting that she "loves" Sofia.

Sofia remained straight-faced despite the mocking and ignored the comments.

@AGT @blakeshelton @kellyclarkson And she made fun of Sofia's accent again tonight. No cool Kelly Clarkson. If this… https://t.co/YpXwiev9jl
— LA Native (@LA Native)1597294241.0

But fans online couldn't, with many jumping to her defense with one Twitter user saying: "And she made fun of Sofia's accent again tonight. No cool Kelly Clarkson. If this was meant as a joke, then I hope you alert people to this ahead of time."

Others questioned why it was necessary for Kelly do so.

And one user even tweeted Sofia encouraging her to speak up about it as they wrote: "Speak up about Ellen! No one should be treated the way she’s treated you over the years. Constantly making fun of your beautiful accent, and ridiculing you for her enjoyment. Love you! Stay safe."

Not the greatest start, Kelly!

$69.95 $55.96
Buy Now
See More Deals
We hope you find these deals as awesome as we do! Just an FYI: we may receive a share of sales from links on this page