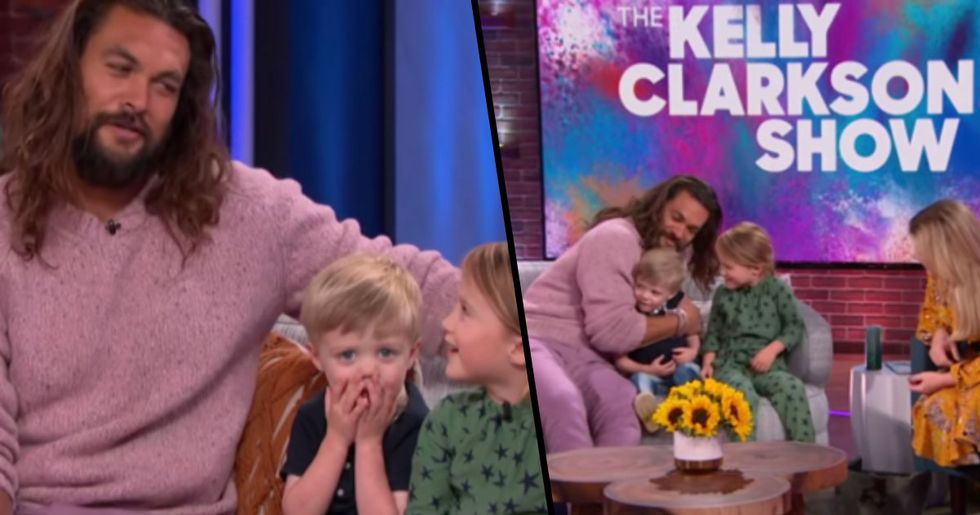 Now he's a verified superstar - with an icon for a wife and an enviable career. It's no wonder why he can't help but make an impact wherever he goes. And Tuesday night was just another prime example of that.

The star appeared on The Kelly Clarkson Show and got quizzed by his biggest fans...Clarkson's starstruck kids, River, and Remy. They grilled him about all things Aquaman, including a very awkward and hilarious question about where Aquaman goes to the bathroom.

The youngsters made for some pretty adorable viewing. Keep scrolling to watch the clip...

And many don't know that, before he started as an actor, Momoa actually studied both marine biology and wildlife biology - proving that he's more than just a pretty face.

The two, seemingly opposite characters, developed real feelings for each other and their relationship became one of the cutest and most genuine love stories in the show.

Many were surprised that the film did this well, because, in the comics, Aquaman is often considered to be a bit of a joke. People were also thrilled to see a superhero played by a person of color.

His superhero persona has garnered a fanbase of all ages.

On Tuesday night, Momoa appeared on the Kelly Clarkson show.

Having only launched just this year, Clarkson has interviewed a range of guests, including the likes of Ellen Degeneres, Chance the Rapper, Chloë Grace Moretz, and Bindi and Robert Irwin.

But Tuesday night was different from the rest...

Jason Momoa was quizzed by his biggest fans... Clarkson's kids - 3-year-old Remy and 5-year-old River. So, as he sat down to be interviewed, Clarkson asked if it would be okay to bring her kids out to ask him a couple of questions.

Things kicked off with a big old hug...

And as they sat down next to Aquaman himself - 3-year-old Remy was fully starstruck, unable to take his hands from his mouth and remaining pretty much silent for the duration.

But his sister, River, well and truly took the reigns.

Her first question "Do you know Little Memeriad" was met with many "awww's" from the audience. We have to admit, it was so cute... our hearts are already melting! In true Momoa style, he went along with it. "Ariels's very sweet, she's very nice. She's also a redhead." He then turns to a (still) gobsmacked Remy: "I'm gonna teach you about redheads someday," he joked.

But the real gem of the night came from this question...

River eagerly asks "Where does Aquaman go to the bathroom?"

Well, where does he go?

The actor threw his hands in the air and responded, "Everywhere!" Good answer.

It's without a doubt one of the cutest things you'll see. This is far from the only time Momoa has won over the hearts of the internet. Keep scrolling to get a glimpse of a photoshoot that saw the star cuddling a kitten. Yes, a kitten...