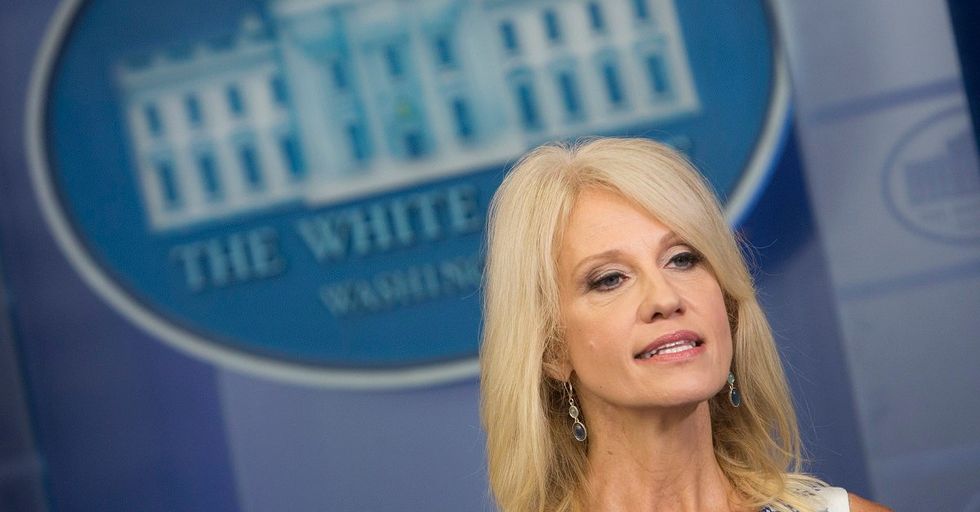 It's been a minute since Kellyanne Conway made headlines, and she's back at it in a big way. This morning in an interview with CNN's Chris Cuomo, she decided to try and blame the Obama administration for the lax gun regulations that lead to the massacre in Las Vegas this week. People are as confused as they are, well, amazed.

Kellyanne Conway is knows how to make headlines.

And flashcards. Or, at least, she has some interns who know how to use the office printer. She also knows how to draw focus in an interview, and that's exactly what she did today on CNN.

But first some background.

Above is an NRA ad meant to stoke fears among gun owners that Obama planned to take their guns away. It's from January 2016. And this isn't at all the first of its kind. Fears that Obama would take everyone's guns away spurred higher gun sales than this country had ever seen.

But since the massacre on Sunday, calls for gun control have started to seem more reasonable.

And the Trump administration has had difficulty cementing its position on the matter. While Trump said after visiting victims in the hospital that it wasn't the time to talk about gun control, in the same moment he was perfectly willing to talk about Rex Tillerson. Also, there's the matter of some of Trump's older tweets, which are proving to be a little inconvenient for him.

But that's never stopped Kellyanne from coming with a position to take.

“You see Hillary Clinton ... rushing to judgment on Twitter the other day while people are still looking through the rubble, searching through the hospitals for their missing loved ones, trying to politicize," Conway said. “She’s tweeted about guns exactly one time this year. Bernie Sanders, zero times. Elizabeth Warren, zero times. They have tweeted about Russia over 30 times, Sanders and Warren." Wait... what? In addition, it seems that this time her position is that it's actually Obama's fault that guns are so widely available, saying, "I did note... it was President Obama's ATF, the Bureau of Alcohol, Tobacco and Firearms, in 2010 that decided not to regulate this device." Conway continued by saying that instead of doing anything, Hillary Clinton was busy politicizing a tragedy... and also that the massacre was because of the media's focus on Russia? It seemed like she was just collecting a pile of random ideas. Honestly, we have no idea.

People were, well, confused to say the least.

Kellyanne Conway is so combative that she has gotten off topic. What does Russia have anything to do with Gun Control.
— Evelyn Holland (@Evelyn Holland)1507204723.0

Conway just combined every "hot button" topic and mashed it into one incomprehensible mess. Girl, why? You make no sense. But it didn't end there...

Some pointed out this could be a good sign.

Going with Conway's line of thinking, if Obama was "so lax" on guns, it stands to reason Trump would want to crack down on them, right? Hmmm.

Others were just dumbfounded.

That she managed to blame one of the worst tragedies in US history on a person who is not not currently in political office.

But many saw this as typical.

There seems to be no shortage of corruption in the Obama administration if you ask Kellyanne, and yet... she thinks Trump's administration is spotless, despite the fact that people keep having to leave it in the midst of scandals.

So few are surprised to see this latest development.

Kellyanne's mental and verbal gymnastics are what she's best known for. She'll get on cable news and say, well, basically anything at all. Which is why viewers related so hard to Chris Cuomo's exhausted, depressed interjection: "Kellyanne, I’m tired, so I apologize in advance, but I have to tell you, a lot of this just doesn’t wash." We are all so, so tired.

But some people felt for Kellyanne.

After all, this is a woman so haunted by tragedies like these she has to make up ones that never even happened just to make enough room for all her sadness.