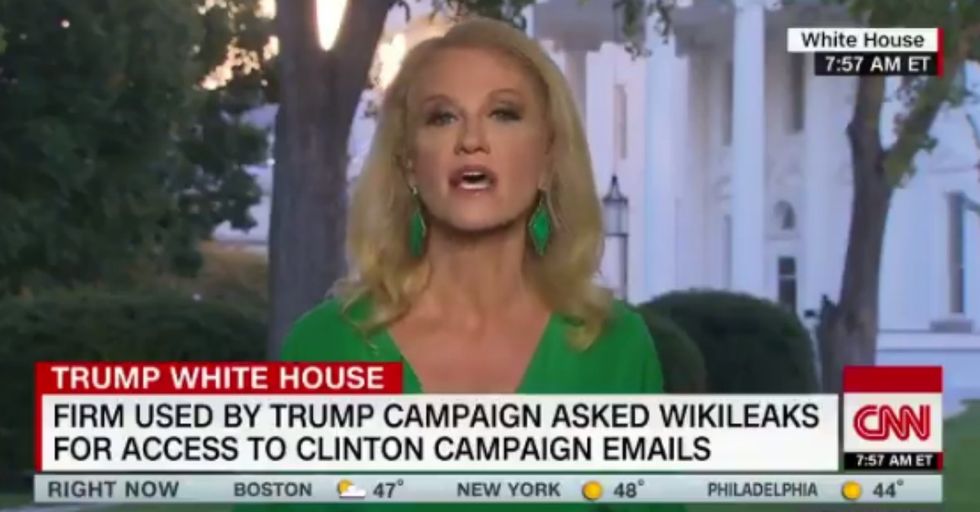 Because we live in a cartoon, Kellyanne Conway interrupted her very serious CNN interview this morning to talk to a squirrel. This actually happened. The mouthpiece for Donald Trump was talking about Hillary Clinton (who is not currently an active politician) and evidently, a squirrel was like, "Nuh-uh," and ran around in the area in which Conway was sitting. Even the squirrel knows we shouldn't be talking about Hillary Clinton on the news anymore.

Kellyanne Conway made a name for herself for being a tireless defender of Donald Trump's many lies.

She coined the term "alternative facts." SNL actually compared her to an evil clown. Pretty much everything that comes out of her mouth is laughable and mockable.

While rambling about why Donald Trump won the election over Hillary Clinton on CNN on Friday morning, Conway lost track of what she was saying to greet a squirrel that had apparently entered her view.

"And frankly, he was just a better messenger and communicator than she was. So I just said she, and I know I was brought on... God I hope that's a squirrel and not a rat," Conway said. "Um, I was, yeah. Hi, squirrel."

It seems that even the squirrel had had enough of Kellyanne Conway's BS.

Also, can Kellyanne Conway not tell the difference between a rat and squirrel? Because if so, girl you need a nature lesson. Stat.

The reactions to Kellyanne Conway's little squirrel distraction were swift and hilarious.

Master GIF-er @delrayser spliced Conway with Dug, the perpetually distracted dog from Up. It's a little odd how much they resemble each other, don't you think? Anyway, if anyone can find the squirrel that shut Kellyanne Conway up for a second, it's won the Best Squirrel Ever award and I have a large bag of acorns to give the brilliant little rodent.