Not to mention, Trump's cabinet is chock full of white dudes. | 22 Words 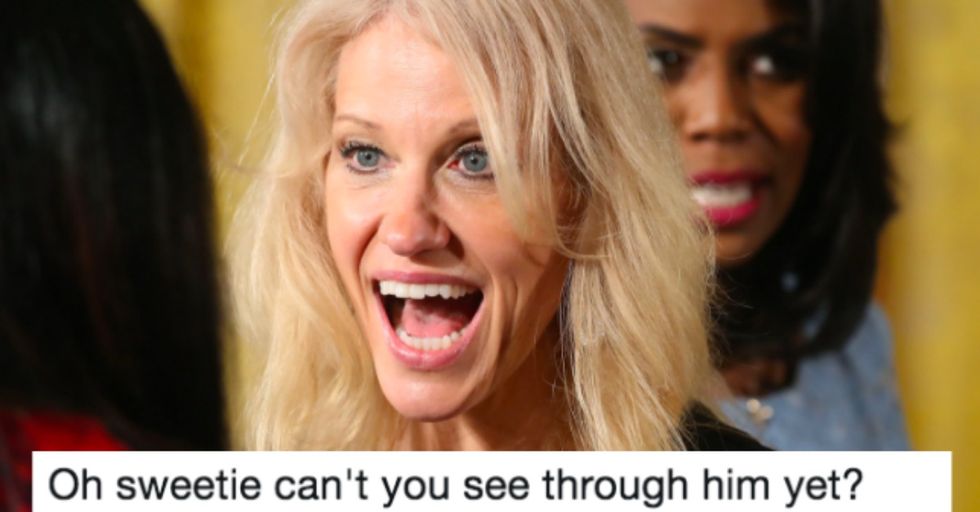 Kellyanne Conway Tweeted That Trump 'Empowers Women,' and the Internet Stepped in to Correct Her

On October 12th, Donald Trump announced his nomination of Kirstjen Nielsen as secretary of the Department of Homeland Security.

White House counselor Kellyanne Conway decided to use that opportunity to tweet about her boss's supposed habit of "elevating and empowering women."

"@POTUS continues his practice of elevating and empowering women to top positions," Conway tweeted in response to Nielsen's nomination.

"Continues his practice"? "Elevating"?? "Empowering"??? The internet was rightly confused and enraged by Conway's statement.

Trump has spent a good portion of his adult life objectifying and harassing women, including his own daughter. Over a dozen women have accused him of sexual assault, and he was accused of raping a 13-year-old. He's not exactly the picture of women's empowerment.

@KellyannePolls @POTUS Oh sweetie can't you see through him yet? He doesn't empower women, he uses them for his pur… https://t.co/JdAnSN8nF5
— Abigail Gracey (@Abigail Gracey)1507841381.0

Contrary to the "empowerment" Conway touts, Trump is constantly demeaning and belittling women who threaten his sense of power. A man who elevates and empowers women doesn't call them "nasty," like Trump did to both Hillary Clinton and San Juan mayor Carmen Yulìn Cruz.

Not to mention, Trump's cabinet is chock full of white dudes.

While these numbers are a little off, they're not that inaccurate. As of February 16, 2017, 71 percent of Trump's cabinet was made up of white men. Women make up only 19 percent of his cabinet, compared to 36 percent of Obama's cabinet. Hmm.

Conway was swiftly owned by pretty much everyone for her absurd proclamation that Trump loves empowering women.

@KellyannePolls @POTUS You can't empower us and say that you can grab our pussies at the same time. JUST STOP.
— Jen Saunderson (@Jen Saunderson)1507840876.0

It's so wrong. "JUST STOP," this Twitter user wrote. Now that's an instruction that Conway should heed.