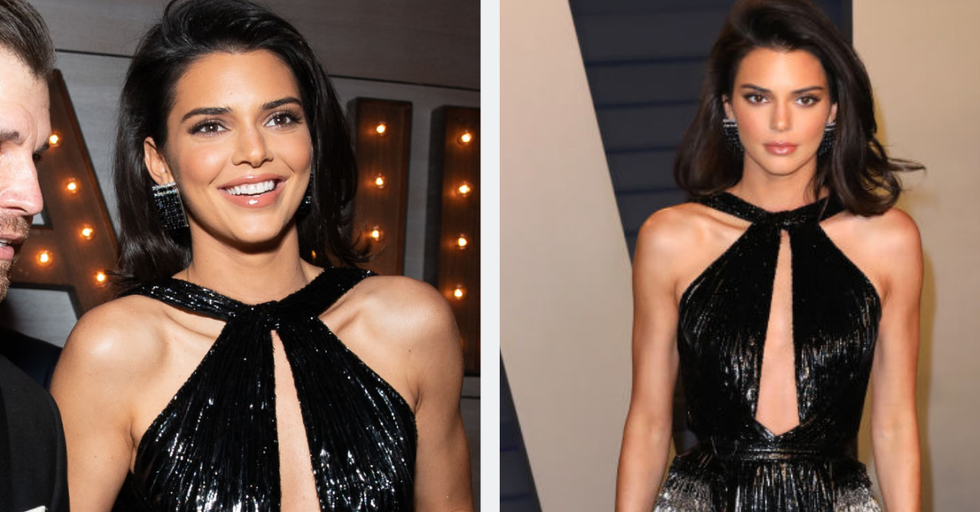 Last night, hundreds of artists gathered in the Dolby Theatre on Hollywood Boulevard for the 91st Academy Awards. It was quite the night, full of surprising wins, upsets, and falls. Yes, Best Actor winner Rami Malek fell off the stage and was treated by paramedics, just moments after his victory. Malek's fall wasn't the only shocking moment of the night. When Green Book won for Best Picture, Spike Lee (who won his first Oscar that night for Best Adapted Screenplay) allegedly tried to storm out of the theatre in rage. (I feel you, Spike).

Then there was the whole Lady Gaga/Bradley Cooper performance that left everyone gasping and shifting their eyes toward Bradley's partner, Irina Shayk, and her reaction at their very apparent chemistry. (Which is insane, since they're all adults and Irina seemed very happy for Lady Gaga and Bradley Cooper's fantastic night).

It was also the first Oscars ceremony in recent memory that didn't have a host. (Who else wanted Amy Poehler, Maya Rudolph, and Tina Fey to actually host?)

Wins and upsets aside, let's talk about something that has set the internet ablaze – Kendall Jenner's dress at the Vanity Fair Oscar Party.

This is Kendall Jenner.

If you happen to live under a rock and you've never heard of the Kardashian-Jenners, allow me to introduce you. Kendall is a model and a social media queen.

She is all about DRAMATIC fashion.

I mean, she's a super model. Why wouldn't she be?

It's not unusual for her to try out some daring looks.

It kind of runs in the family, wouldn't you say? She is Kim Kardashian's sister, after all.

The Kardashians have never shied away from daring ensembles.

Kim is the queen (or should I say Kween) of not caring what people think about her and wearing whatever the heck she wants. She can rock pretty much any look.

So, it's not shocking that Kim's younger sisters, Kendall and Kylie, also take fashion risks. It's a family affair.

Kylie is always changing up her look.

A fan of wigs and edgy styles, Kylie is always pushing the envelope when it comes to her fashion. Those girls know how to work it.

Kendall may be the more reserved Kardashian-Jenner sister, but she still knows how to flaunt her stuff.

Her Instagram feed is filled with all of her fierce looks.

This look is totally '90s exec chic. Full disclaimer, I am not a fashion expert but I'm sticking to that description.

Kendall can rock pretty much any look she wants.

This suit is amazing. I have intense suit envy.

Last night at the Vanity Fair Oscar party, Kendall rocked one of her most daring looks yet.

Seriously, I was worried for her. One wrong move and everyone sees everything.

She has legs for days! The dress is directly off of the Rami Kadi's spring 2019 runway, and Kendall looked amazing.

If Kendall was nervous about a wardrobe malfunction, she didn't show it.

She posed fiercely on the red carpet, looking every bit the supermodel that she is. We're fainting!

She accessorized the look with stunning earrings and a nude lip.

It's like vintage Hollywood meets modern millennial. A queen of the red carpet!

This dress gives me real anxiety, though.

But I guess that's why I'm not a model... I'll leave the daring fashion to the experts.

Kendall wasn't the only one who stood out on the red carpet last night.

Here are some of the most unique, daring and bold looks from the evening. Like Melissa McCarthy rocking a sweatsuit for the after party. What a hero and a legend. She is #goals.

Paired with her bright red hair and a plaid pattern, singer Halsey definitely stood out. What a beauty!

This is basically every celeb on the red carpet.

I'm jealous, as a mere peasant. Not all of us can be rich and famous, I guess.

An all-leopard outfit is certainly exciting, and model Behati Prinsloo rocked it on the red carpet.

Amy Adams took the plunge in this dress. Get it? I'll stick to my day job.

Who said patterns aren't in? Elizabeth Debicki was the queen of patterns in this number.

New Zealand model Georgia Fowler makes a statement on the red carpet in this unique dress. Those feathers though!

This is how you shut down a red carpet. Nobody looked better than Billy Porter. We bow down.

An all-purple look? Fit for an Oscar winner.

To say Eighth Grade star Elsie Fisher looked chic last night would be an understatement. This suit is amazing.

Hi, yes, this suit is perfect and so is Awkwafina. Carry on, everyone. As you were.

Is Zoë Kravitz a human or a goddess? She continually stuns on every red carpet.

While the Academy Awards are a celebration of cinema...

They're also a celebration of red carpet fashion. Who had your favorite look of the night? Let us know!