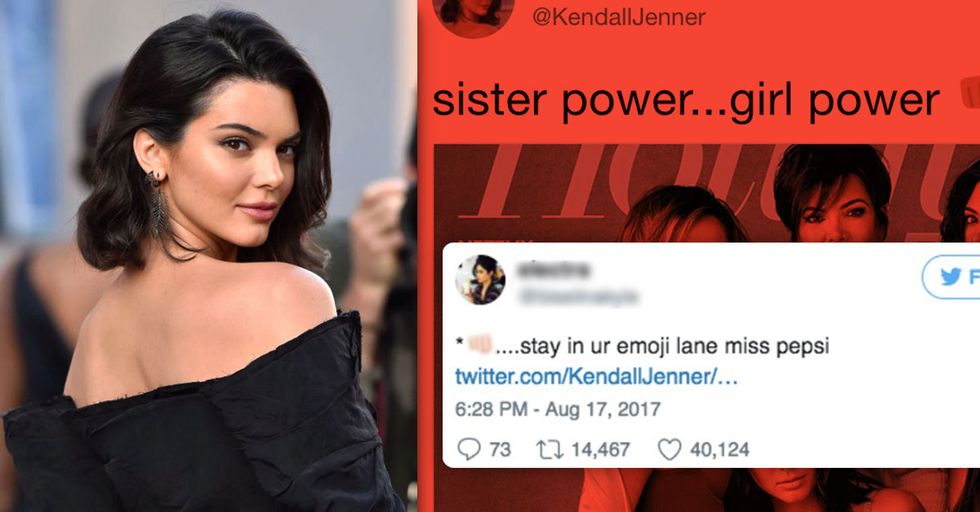 Can Kendall Jenner do anything anymore without igniting racial backlash?

Apparently not. Kendall's latest Twitter controversy all started with a single, pot-stirring emoji...

Kendall Jenner's no stranger to controversy.

She and her super famous family have kept us all wrapped up in a constant drama storm ever since their reality show Keeping Up With the Kardashians first aired back in 2007. At this point, it's honestly hard to remember life BK* *Before Kardashians

Kendall's critics took issue with the color of the emoji she chose to tack onto the end of her quick tweet.

Of all the available emoji skin tones, Kendall picked the middle one. Kendall. Girl. I mean, maybe after a long day at the beach sans sunscreen?

Immediate backlash for Kendall's emoji choice was far from forgiving.

Yeah, girl. What they said.

Critics were all kinds of snarky.

Eye rolls for days. Others were less into trashing her emoji choice, and more into criticizing other aspects of Kendall's post...

That little fist wasn't the only thing worth clapping back at in Kendall's tweet.

Haters managed to pick apart every single thing with which they took issue. These people have so much time on their hands.

C'mon, friend. No need to rope those innocent water bottles into all of this.

Some weren't interested in commenting on the Kardashians or Jenners at all.

This is also far from the first time Kendall Jenner's landed herself in hot water over something controversial.

It's happened so many times, one might even start hypothesizing that she's trying to push our buttons...

One of her more recent scandals was that whole Pepsi commercial debacle.

Fans were not fans of Kendall suddenly becoming the face of all social justice. Gee, imagine that!

So many angry people slammed the ad, that Pepsi ended up pulling it.

Yeah. Not a good look, Pepsi.

A couple months later, there was that whole dead musician T-shirt scandal.

Kendall and her sister Kylie decided it would be a great idea to make "vintage" t-shirts for their Kendall + Kylie collection with sexy pictures of themselves superimposed over dead musicians' album cover art. Why? Who even knows.

Their idea was received about as well as you'd imagine it would be...

Terribly. It was received terribly.

Kendall, you'll get the hang of this whole tact thing eventually.