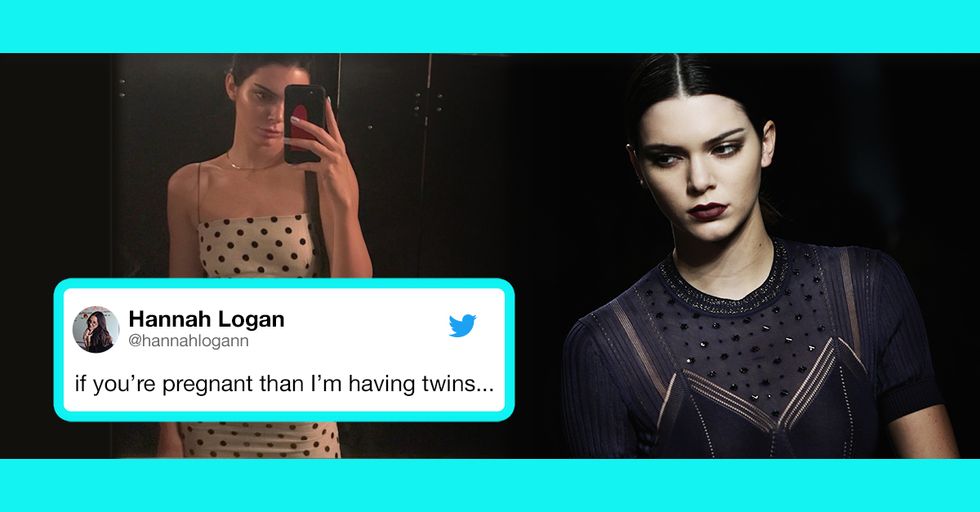 Amidst Her Family's Drama, Kendall Jenner Finally Addresses the Wild Rumors About Her Own Pregnancy

Here's a question: If a day goes by and there's no news story about the Kardashian pregnancies, did that day even happen?

The answer is a resounding "no."

So here we are today, fending off another Kardashian-Jenner pregnancy rumor, this time about Kendall. (She and Kourtney were the only ones left without sufficient pregnancy gossip.)

By now, several Kardashian pregnancies have been confirmed.

We know that a surrogate is pregnant with Kim's third child, and even though she didn't mean to let it slip, we know that it's going to be a baby girl!

And Khloe recently put pregnancy rumors to rest with this moving pic of her mom-to-be belly:

"My greatest dream realized! We are having a baby! I had been waiting and wondering but God had a plan all along," Khloe wrote. Khloe's having a baby with her boyfriend, Cleveland Cavaliers player Tristan Thompson.

That just leaves Kylie, and the rumor mill been quite busy when it comes to the youngest Kardashian-Jenner sister.

When Kylie wasn't included in the family's Christmas photos, some speculated that it was because she is pregnant and wasn't ready to announce it. Others thought it might be because she's not pregnant and just wants to keep us in the dark.

Some even thought that Kylie already had her baby and is just hiding the kid from the world.

And we wouldn't blame her. The rumors are out of control.

But until now, Kendall Jenner has mostly avoided the preggo talk.

The 22-year-old model has mainly been sticking to, well, modeling, and Instagramming, and all that good stuff. But she recently posted a picture that got people talking about a perceived bump that could mean a baby's on the way...

On December 29, Kendall posted this photo to her Instagram with the caption "loner life."

The lighting, the angle, the polka dots... Well, it all got people talking.

MTV Australia was the official gossip ring-leader on this one.

They tweeted that some believe Kendall is now pregnant based on that photo she posted. That would make her the fourth Kardashian-Jenner sister to (at least be rumored to) be joining the mommy club.

The rumor was short-lived, however, as Kendall shot it down quickly with an explanation we understand all too well:

"I just like bagels ok!!!" she wrote. So there you have it, folks. Kendall Jenner is not pregnant.

She just had a bagel food baby, and honestly, we're super psyched for her.

Food babies are like, the second greatest type of babies. And bagels are one of the greatest foods. Congratulations, Kendall! We're so happy for you, and we hope your bagel baby brings you all the joy in the world!

New Jersey bagel store The Bagel Nook took this opportunity to spread the good word about their bagels.

And we don't blame them! Kendall Jenner says she likes bagels? Bagel purchases probably spike. Kudos to The Bagel Nook for being smaht. Kudos to Kendal Jenner for professing her love for bagels, and shame on the Internet for relentlessly pushing unfounded rumors.