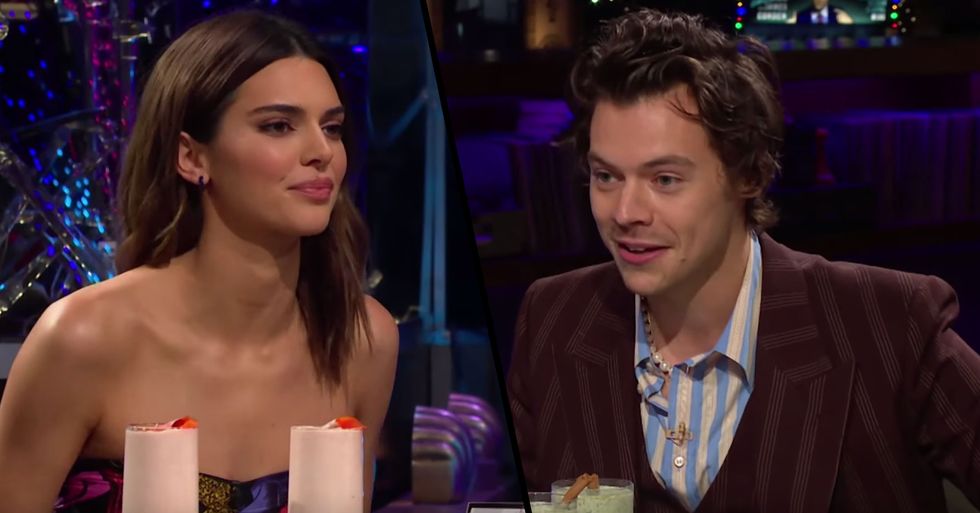 However, he's a man of many talents. Recently, he decided he was going to take talk show host James Corden's place on the Late Late Show while the original host is away and let me tell you, it's already given us some iconic moments.

And nothing gets more iconic than Styles sat with his ex Kendall Jenner, eating animals' genitals... right? Jenner even revealed some pretty scandalous secrets about the Kardashian clan... Awkward!

Keep scrolling for the hilarious video... Grab a sick bucket while you're at it!

Another reason why he's so popular is that he is a man of many talents.

Harry Styles may be known for his singing skills, but he also has a passion for other things including hosting. Keep scrolling to see the video of him in action.

So when James Corden needed a stand-in, Harry was first in line to accept the role.

The Late Late Show with James Corden has quickly become one of the most iconic shows on television. It's given us some hilarious moments from Carpool Kareoke fails, all the way to celebrity spats.

Now, we might as well add Harry Styles playing "Spill Your Guts Or Fill Your Guts" with Kendall Jenner to the list.

The segment consists of 2 people sat around a roulette table, asking each other some spicy questions which may or may not get awkward at times. And that's not the only thing, if the other person refuses to answer a specific question, they must eat whatever unpleasant dish is in front of them.

Dishes range from animal genitals all the way to disgusting drinks.

Trust me, if there's anything you wouldn't want in your mouth, it would be anything on the roulette table.

Why is this pairing so funny?

Well, Kendall Jenner was romantically linked with the twenty-four-year-old singer back in 2014. Rumors stated that the high-profile couple had a whirlwind romance that came to an end within a few months.

Neither of them spoke about the little details... Until now.

Though we didn't get much information about the brief fling back then, it seems as if both of them are in a better state of mind to be able to reveal some juicy gossip about it now.

The first question was very awkward!

As Harry read the card to himself, he laughs, knowing it's going to be a difficult question for Kendall to answer. He looks at her and says: "Rank your siblings... from best to worst parent."

Harry thought Kendall wouldn't answer the questions and urges her to drink the thousand-year-old eggnog drink in front of her. However, she tackles the question, head-on.

And it was pretty savage!

Her final rankings stand like this: Rob first, cute, then Khloe, Kim, love that, then Kylie... and finally... Kourtney! Yikes!

Harry was shocked... as was Kendall!

She couldn't believe she had just ranked all her siblings on their parenting skills. It is a very sensitive subject but hopefully, none of them will hold it against her...

And Harry didn't get it any easier.

The model asked him: "Which songs on your last album are about me?" And immediately Harry slapped a hand over his face, laughing.

And with a mouthful cod sp*rm on the line, Harry considered answering the question.

After teasing the audience with a half answer, he grabs a fork and puts some of the disgusting food in his mouth, which makes Kendall and the rest of the audience cringe. I mean, it was funny! Disgusting, but very funny!

Check out the full video here:

It's one of the funniest things I've seen in a while!

If you're in the mood to find out who Kendall Jenner has recently been seen with...

Then keep scrolling! I heard she might be in a relationship with none other than Leonardo DiCaprio...