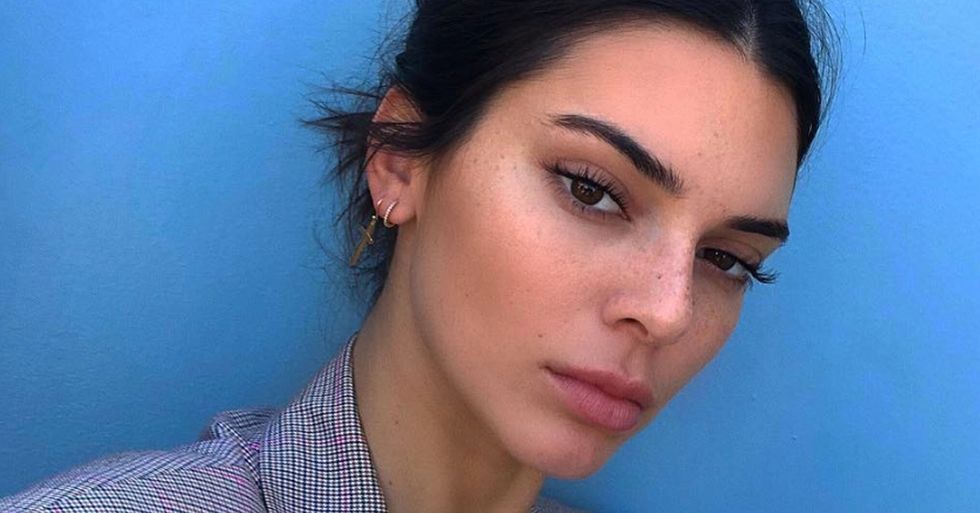 Say what you want about celebs - they sure know how to get everyone talking. And one of the best ways to get the job done? Well, through the magic of fashion, of course. When it comes to breaking the internet through their sartorial choices, there seems to be one clear route for celebrities to go down. The best method to garner maximum attention? By getting (almost) naked, of course!

Whether they're flashing some flesh, wearing clothes that look more like an optical illusion, bending rules of gender, or freeing the nips, there have truly been some daring outfits.

However, Kendall Jenner has really shocked fans recently with her most revealing outfit to date. Keep scrolling to see it!

At the Victoria's Secret Fashion Show After Party in 2018, Bella wasn't afraid to go for a chain mail "cover-up."

The Victoria's Secret After Party was obviously a rich source of nearly-naked vibes, as this Chinese supermodel proves.

No nude-illusion list would be complete without Kim - and this optical illusion look that she wore to the E! People's Choice Awards in 2018 is pretty special.

Proving that men can do a "naked dress" too, the Queer Eye star looked fabulous at the 2018 Emmy Awards.

Proving you can look naked and classy is the Indian actress, also at Cannes.

The singer looks every inch the '00s R&B star, draped in diamantes at the 2018 Billboard Music Awards.

The comedian, actress, and author went for a semi-sheer vibe at the 2018 MTV Video Music Awards.

The British singer went for an incredibly revealing look to the same event - and it clearly won off, as she took home a prize.

Rather than being "nearly naked" through a sheer finish, the singer instead went for a shredded effect.

At the 2018 Vanity Fair Oscar Party, Hosk managed to cover up the essential areas - but basically nothing else.

The Met Gala is an opportunity for celebs to truly think outside the box - and at the 2019 ceremony, Kravitz certainly didn't disappoint.

Mrs. Justin Bieber wore a nude illusion embellished with jewels at the Cannes Film Festival in 2018.

At the Venice Film Festival in 2017, Lawrence chose to cover her modesty using only flower petals.

At the 2017 MTV Video Music Awards, Lovato wore a surprisingly modest pair of baggy harem trousers - but contrasted them with a totally see-through top.

At the 2017 London premiere of Mother!, Lawrence appeared to choose to wear jewelry instead of clothes.

At the NAACP Image Awards in January 2018, Berry's look was rather ... crotch-centric.

And those red carpets were no stranger to celebrity nudity, as Cox opted for a similarly revealing look at the same event.

An early entry, the star wore a dress that was just about decent to the premiere of Thor: The Dark World in 2013.

The model (and Mrs. John Legend) had to be careful not to move too much at the American Music Awards in 2016.

Another vintage entry to our list, here's Braxton at the 2001 Grammys.

At the 2017 Cannes Festival, Hadid managed to somehow be naked and in an incredibly complicated outfit at the same time.

Here's another classic, and arguably the pioneer for the resurgence of the naked dress. Rihanna rocked pretty much only Swarovski crystals to the 2014 CFDA Awards.

You may know her for her tumultuous relationship with Bradley Cooper, but back in 2015, the model went nearly-nude to the Vanity Fair Oscars party.

At the same party, Ora also went for a similarly sheer black affair.

The actress, best known for her appearance on West World, wore this jaw-dropping... dress (?) to the Vanity Fair and L'Oreal Paris Toast to Young Hollywood in 2017.

Never one to shy away from showing off her (incredible) bod, Amber Rose left nothing to the imagination at the 2017 MTV Video Music Awards.

In perhaps the most naked entry on our list, here's Miley Cyrus performing on stage at the 2015 MTV Video Music Awards, concealed only by a few plastic spheres.

Unbelievably, this photo is from the very same event. Clearly, Cyrus was on form, fashion-wise, that night.

At the 2017 Video Music Awards, she went for a bejeweled mesh bodysuit, paired (oddly) with some large, beige underpants.

At the 2015 Met Gala she left nothing to the imagination - but, hey, at least the carpet was covered up!

At the same 2015 Met Gala, Beyonce was also concealed only by jewels - and she looked incredible.

The multi-talented star went super daring at the China: Through The Looking Glass' Costume Institute Benefit Gala at the Metropolitan Museum of Art on May 4, 2015.

The star went for a combination of nude illusion and jewel embellishments at the 2017 MTV Video Music Awards at The Forum on August 27, 2017.

In the dress that perhaps started it all (and reportedly the reason that Google Images was invented), J-Lo went uber-plunging at the 2000 Grammys.

At the 2017 MTV Music Awards, Munn went for some daring cutouts, with only a wide fishnet panel covering her front.

Proving that she 's definitely still got it, J-Lo went for another nude illusion at the 2015 Billboard Music Awards.

At the same event, Emma Roberts appeared to deflect attention from her naked body using the magic of glitter.

Showing that their sisters aren't the only ones who can rock a nude look, the two went for contrasting (though similarly revealing) dresses at the 2016 Angel Ball.

At the front row of the Balmain show at Paris Fashion Week in 2016, she went for this very loosely crocheted dress.

Kim Kardashian (you get the idea).

At the 2016 MTV Video Music Awards, Kim rocked a sheer dress that almost looked as if it were about to fall off, completing the undone look with wet-look hair.

At the 2019 BET Awards, Stefflon Don went for an eye-poppingly high thigh slit.

At the 2019 Cannes Film Festival, Ambrosio wore an incredibly floaty dress - and posed to excellent effect.

Putting a real shift in on our list, Kim looked almost surreal in this nude-effect dress at the 2019 Met Gala.

The "camp" theme at the 2019 Met Gala gave us a lot of strong (and revealing) looks - like this one, by model Emily Ratajkowski.

The thigh slit is a classic in terms of daring celebrity dress, and Lima went for it at the Annual Elton John AIDS Foundation Academy Awards Viewing Party Celebrating EJAF this year.

Trinh made the bold choice of having her crotch as her outfit's focal point at the 2019 Cannes Film Festival.

The model gave an almost full vertical slit in her outfit for the 2019 Cannes Film Festival Gala.

The actress also got her thigh out for Cannes in 2019.

The 2019 MTV Movie and TV Awards saw the star rocking a pair of fishnet tights... over her entire body.

Can't decide whether to go for a see-through gown or an eyepopping thigh slit? Skye showed you can do both at the 2019 BET Awards.

The model's look for the 2017 MTV Video Music Awards took nude illusion to the limit - it's almost unbelievable that you can't see anything.

The actress appeared to hide her modesty by draping herself in tinsel at the 2019 Vanity Fair Oscars Party.

Her look at the 2019 Met Gala made a fashion faux pas (a visible g-string) into a surprisingly cute look.

Her plunging neckline and layers of tulle at the 2019 Met Gala made for an unexpectedly classy look.

At the premiere of Four Weddings & A Funeral, Hurley accompanied then-boyfriend Hugh Grant in a Versa dress that stole all the headlines.

We wish we could show off our stomachs like this! A true super model.

Stomach showing again - but this time, with glitter! We love!

We're not so sure on the sheer panels here. Sorry, Linda. But a daring dress, nonetheless.

That's a deep V neck, that's all we can say!

Jenner appears almost completely butt-naked at the 2018 Cannes Film Festival. She does look incredible though, right?!