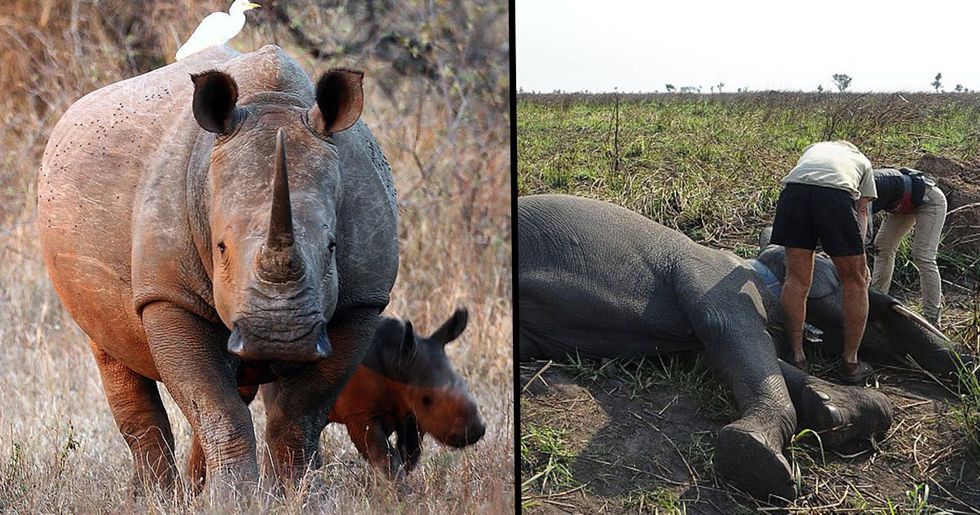 Every single year we're becoming more aware of the damage that we, as humans, bring upon the natural world.

Yet the problem in Africa is hardly improving.

Kenya's government has done so much to try to stop the poaching of elephants and rhinos. But it wasn't enough. These two beautiful species are getting closer to extinction because of illegal trade.

That's why Kenya's government is leaning towards introducing the death penalty for poaching.

But it's not just poaching that's destroying the wildlife. Rapid urbanization is adding to the problem.

At the same time, the United Nations aren't in support of the death penalty. According to them, it may be effective, but at what cost? Is it really going to help to make progress, or will it push our culture back to the Middle Ages?

Many social media users don't care; they just want justice for the animals.

We, as humans, disagree on so many things.

But poaching is still a serious issue in Africa, particularly in Kenya.

Rhinos and elephants are the main targets of these poaching because their horns and tusks can be used for medicine and ivory, VT says.

The government is already doing its best to prevent the killings.

"We have in place the Wildlife Conservation Act that was enacted in 2013 and which fetches offenders a life sentence or a fine of U.S. $200,000," Najib Balala, the Cabinet Secretary for Tourism, says.

"However, this has not been deterrence enough to curb poaching, hence the proposed stiffer sentence."

In just 2017, poachers killed 9 rhinos and 69 elephants, causing their death rates to outweigh the growth of the population.

Now there are less than one thousand black rhinos left in Kenya.

So the death penalty is gaining more support among the country's officials, although it hasn't yet been enacted.

"Meanwhile, community-level interventions must explore different economic opportunities that secure rather than destroy biodiversity as pressure on natural resources grows with increasing development, infrastructure, and urbanization."

One example of such rapid urbanization is Ghana.

Traffic is a major problem in the country as the city pushes further into the countryside, VT reports.

Because of it, "meetings and functions usually start 45 minutes late."

Locals even joke that "'GMT' stands for 'Ghana Maybe Time.'"

In 2005, Ghana had only one-hundred and fifty-nine thousand vehicles roaming the country.

In 2015, there were eight-hundred and ninety thousand of them. Cars require roads and roads invade the natural habitat of the lions, elephants, and monkeys that Ghana is known for.

"Not only can [Kenya Wildlife Service] catch wildlife criminals but now they have the capacity to ensure those criminals are convicted under Kenya’s robust laws," says Max Graham, Space for Giants.

"A ranger in the field should not have to experience the frustration of confronting a wildlife criminal they arrested a week earlier walking free again because of an acquittal."

"This is a critical step up in the battle against the illegal wildlife trade."

However, some people don't see the introduction of death penalty as a progressive decision.

The United Nations is against it.

VT says it suggests a "phasing-out of capital punishment," while the Office of the High Commissioner for Human Rights "advocates its abolition worldwide."

They also believe that just because poachers do what they do, they don't necessarily enjoy it.

It's often because of the extreme levels of poverty that most African countries are suffering from. That will likely cause a moral dilemma for those who will have to approve and proceed with the execution.

Meanwhile, Kenya’s tourism executives say that poaching has already reduced significantly because of "investment in conservation and wildlife law enforcement."

However, African Wildlife Foundation predicts that "at current poaching rates, elephants, rhinos and other iconic African wildlife may be gone within our lifetime."

That's because poachers "use high-powered technology and weaponry to track and kill many animals at once without being detected."

But, at the same time, conservationists and rangers are being equipped with the latest technology too.

Some rangers use "thermal and infrared cameras" to find poachers before they find the animals.

"In the past, we would never have found these people," says Brian Heath, the chief of the Mara Conservancy conservation group.

"Now the poachers are saying it’s just not worth going out because the chance of getting caught is getting higher and higher. It has been a big deterrent."

"In other areas, like South Africa where most rhinos live, dozens of rhinos have actually been airlifted out of poaching-prone areas and into safer locales, like Botswana, where poaching is rare."

Vietnam is the dominant market for illegal rhino horns.

But there's illegal trade in the West too.

Fortunately, with the laws becoming more strict, these markets are getting weaker.

The UN might be against the death penalty, but social media users are definitely not.

Barbara Bujeiro Laria praised Kenya on Facebook, "A step in the right direction. Now add trophy hunters to the list."

Rurik Rauta: "No no no! Surely there are even richer people who would pay to hunt humans."

He then added, "Let them pay to hunt humans who have been caught as poachers and use the money to improve [the] life of animals."

Morgan LaRue wrote, "If we REALLY want the punishment to fit the crime I say we cut their teeth out and sell them on the black market, skin them to make rugs and tapestries, and replace their eyes with glass so [then] we can mount their heads on walls."

Rufuss Dondalinger: "No trial, no court, execute at time of offense & leave them there to feed the animals ??"

Scott Profit: "Only way they can provide for their family? That is pure horseshit. YES - punishment would fit the crime."

Carol Knapp: "Glad they are doing the death penalty. You do the crime, you need to pay for what you did."

Parmdeep Jagdev: "Yes, I believe in the death penalty for poaching. Kenya has a diverse variety of wildlife that is part of the beauty of the country."

"Protecting wildlife will mean that future generations will enjoy its natural beauty. Tourism is a big money earner and keeps many in jobs. Hunting and poaching, on the other hand, don't."

Beca Lo: "YES. YES AND YES. This is what you deserve if you’re going around killing animals for no good reason."

Shelia Gideon: "Breaking the law. Don't do the grime if you can do the time if death is what they get. So Be It."

Andy Downs: "If there is a job vacancy for the job of executioner I’m up for it ?"

Kevin Lomakol Akol, a Kenya citizen, noted, "Our constitution doesn't allow the death penalty. The sentence is automatically turned to life in prison, but am sure they'll wish for the death penalty when they experience our prisons."

Stanislav Spon: "While I don’t agree about the death penalty for poaching, I do think they should implement tougher regulations against people who commit any type of crime against animals."

He added, "I don’t understand why hunting animals for sport is still considered normal practice in 2019."

Beth Bauerlein suggested, "Now if we could do that for dogs & cats that are abused..." Animals aren't punching bags for humans who've had a bad day, and they're definitely not entertainment.