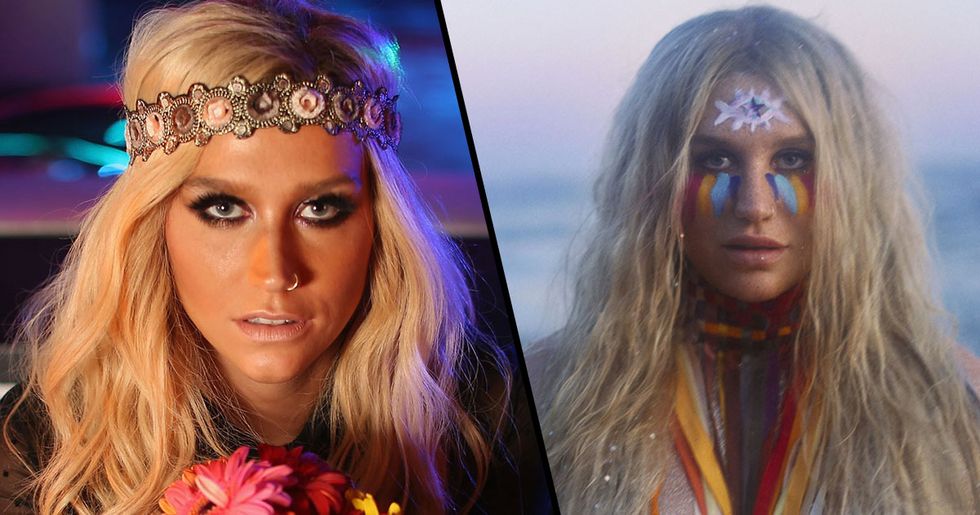 The 31-year-old singer, Kesha, posted a make-up-free selfie of herself on Instagram at the turn of 2019.

For many, the new years resolution is about shedding a burdensome part of ourselves. For Kesha, that was the powdered make-up mask under which the public spotlight demands she hides.

The Instagram post went viral almost immediately, with over 480 thousand likes, and 12 thousand re-tweets, over the caption - "this year my resolution is to love myself...  just as I am, all fucked up and imperfect and whatever else. And to let my freckles liiiiiiiive".

With spotless visages of beauty dominating social media, the silver screen, and the magazine shelves (as they have done throughout the last century), it seems the conversation surrounding media representation of the female body has truly come to the fore. With Kesha herself saying, "I like my junk. Ten years ago, I never thought I’d be able to say that.”

A history of the mask.

Societal norms have placed women in the public eye under pressure to wear make up since the Ancient Egyptians. Here's a brief cosmetic timeline...

The Queens of Ancient Egyptians used a mix of beeswax and rosewater to coat their skin, supposedly giving it a youthful glow.

It's also in the bible.

In Kings 9:30, Jezabel is said to 'paint her eyebrows'. Jezabel, having used her influence to corrupt her husband, Ahab, plays a sexual, manipulative archetypal role in her own story - symbolised in her application of make up.

In Europe, from the Renaissance up until the late 19th century, the highest classes - men and women - would whiten their face. This was meant to show that they spent no time working outside, and were more noble.

In the early 20th Century, no one wanted make up. Cosmetics were so unpopular that, for a long time, they weren't available in department stores. But that all changed in the 1920s with...

In the 1920s, Coco Chanel pioneered the ubiquitous combination of dark eyes, red lipstick and red nail polish we see today. Kickstarting the cosmetic boom of the 20th century.

But now we've looked at the history...

Now we know more about how we got here, a good question to ask ourselves as a society is - what effect is the cosmetic industry having on us? In particular, what effect is it having on women?

As we all know, the perfect skin that's touted on cosmetic advertising, is not representative of the general population. It is also common practice for cosmetic companies to photoshop models to remove imperfections.

This approach of whitewashing the imperfections of models, could make teenagers - teenage girls in particular - who have imperfect skin, feel abnormal at the hands of a perfectly normal issue. A UC Davis Health Article wrote that an estimated 85% of teenagers will suffer from acne at some point during their teenage years.

Make up has become so ubiquitous, and an expected part of women's daily lives, that research has shown that 44% of women don't like to leave the house without first applying make up. This means that 44% of women risk anxiety if they go without make up in public.

Then there's the testing on animals...

In the 1990s a number of cosmetic brands faced criticism for testing their products on animals. While the uproar has seemed to die down since then, PETA have released a list of brands that still test cosmetic products on animals. The list includes cosmetic titans like Avon, Victoria's Secret, and Maybelline.

Now it's 2019 and the 31-year-old singer, Kesha, wants to make a change to the way people, especially her younger fans, see her.

When she's put her face on.

This is how the singer tends to turn out for media shoots and selfies.

And this is the recent selfie - freckles and all...

And the ball kept rolling.

Here are some of the comments that followed the post.

This commenter had always been bullied for her freckles and claimed Kesha's selfie gave her more confidence.

Maybe this woman will be less worried by the New Zealand heat.

And this poor soul.

This commenter may need a little more in the way of reassurance.

Now it's not just Kesha!

It's not just Kesha going au naturale. A host of other celebrities are joining suit.

Alicia Keys posted this picture of herself on Instagram in 2016.

Selma Hayek took to Instagram with the tag 'Wet hair, no make up, no filter, no retouch'.

Kylie Jenner joined in, grabbing over a million likes.

Jlo drove the conversation with the hashtag (lovemeasIam).

Cameron Diaz used her make up free selfie to drive the conversation on ageing.  Commenting, I'm so excited to continue the conversation because learning that you can age well, will actually help you age better.

But not everyone went for it.

The make up free selfie hasn't been for everyone. With some celebs not seeing the value, or suffering too much for their posts.

Star Wars star Daisy Ridley decided to opt out of the celebrity trend. Admitting in an interview, 'my skin isn't great so I don't post no make up selfies, much as I'd like to.'

Rapper, Lil Mama went as far as to delete a selfie of herself without make up after someone commented on twitter, 'Lil mama looking like Calvin Cambridge from Like Mike'. It seems it's not just the bare skin women need to pull this off - but thick skin too.