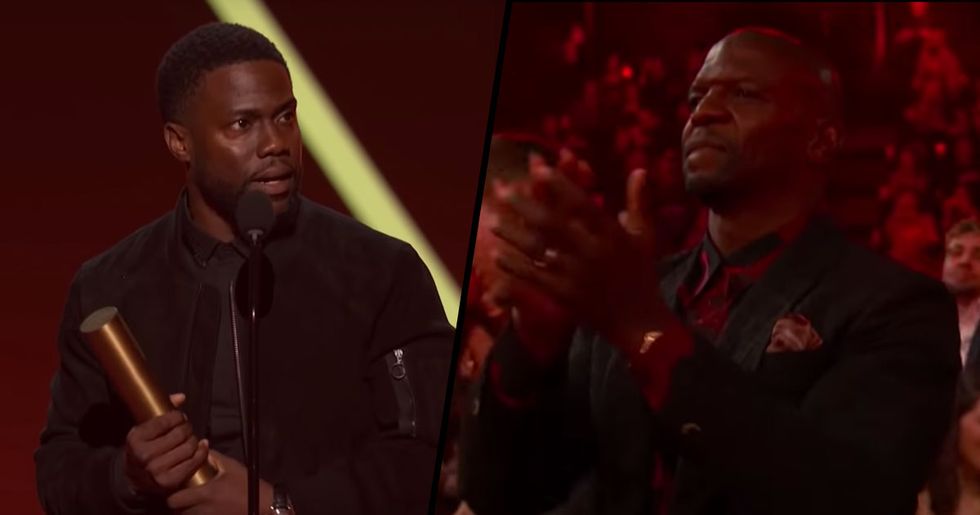 In the early hours of September 1st, comedian and actor, Kevin Hart, was involved in a major road traffic accident and had sustained life-threatening injuries.

Hart was accompanied in the vehicle by 2 other people and managed to escape the written-off car, which had been rolled over onto its back, to find help.

Though it is a miracle that no one died, Hart and his friend, Jared Black, did suffer major back injuries.

Quite understandably, Kevin has remained quiet during his recovery period, and only his wife has offered a small insight into how he's been coping.

Hart made his first public appearance this Sunday, accepting the Comedy Act Award for his Netflix special Irresponsible at the E! People's Choice Awards.

Kevin Hart was involved in a horrific car accident.

In the early hours of September 1st, reports of a major car accident in Malibu began flooding in.

When the vehicle smashed into the wooden fence off the highway, the entire roof was crushed, leaving the vintage car in complete ruins. The official police report described the accident on September 1st: “at approximately 0045 hours, A 1970 Plymouth Barracuda, driven by Jared Black, turned from the southbound Cold Canyon Road to eastbound Mulholland Highway. Black immediately lost control of the vehicle, and the Plymouth left the road and rolled over down the northern embankment."

They have suffered "major" back injuries as a result of the accident, police have reported. The details about these injuries remain unclear, but many are worried as to whether the men will ever fully recover from such an injury.

California Highway Police confirmed that Black was not under the influence, and had not been drinking before the accident.

News of the extent of Kevin's injuries began flooding in...

It has been revealed that Hart underwent major spinal surgery on Sunday evening, just hours after the crash. He fractured his spine in 3 different places.

Sources told TMZ that the surgery on the night of the accident involved fusing 2 fractures in his upper back and 1 in his lower.

Kevin was reportedly in a lot of pain.

Although the surgery was a success, Kevin was going through hell. The source told TMZ that he has to be heavily medicated because the pain was just too intense.

Lumbar fractures can often result in, at least, difficulties walking, and, at worst... partial paralysis of the arms or legs.

However, Kevin's doctors have remained hopeful about a full recovery.

Luckily for Kevin, his doctors reportedly expect him to make a full recovery, but it's going to be a long and grueling journey as he faces months of rehabilitation to get himself back onto his feet.

Kevin was absent from social media for nearly 2 months.

Since the accident, Hart, quite understandably, remained quiet.

Following his surgery, the actor has been going through intense rehabilitation.

With the looming risk of permanent paralysis, Hart's team of doctors were quick to get him straight back on the mend.

And now, nearly 2 months on from the accident...

All the hard work seems to be finally paying off.

Kevin spoke out regarding his recovery...

And he seems to be well and truly on the mend.

In which he thanks fans for their love and support, as well as updating them on his recovery progress.

The emotional video also showed footage of his recovery...

In the clip, the actor can be seen wearing a harness and undergoing intense physical therapy. His family also appear in the post, including his wife Eniko Parrish, and their children.

And in the video, Hart explains how the accident has changed his perspective on life.

"After my accident, I see things differently, I see life from a whole new perspective. My appreciation for life is through the roof. I'm thankful for my family, my friends."

He also added some heartfelt wisdom.

Fans were surprised to see Hart at the awards.

Hart had the support of his family.

With his wife, Eniko Parrish and daughter Hendrix Hart by his side, Kevin accepted the award for Best Comedy Act 2019.

The outpouring of support from the audience moved Hart.

Kevin did not expect the audience to be quite so warm and the standing ovation he received when accepting the award really moved him.

The Wolverine actor presented the award and Hart came out to a standing ovation.

Fans were happy to see Hart back on his feet.

Kevin Hart's fanbase was overjoyed to see how well the actor and comedian have come following the crash.

Hart gave thanks to God.

Hart began his acceptance speech by saying: "First and foremost, man, thank God because I definitely don't have to be here."

You can watch his full acceptance speech here:

Hart not only gives thanks to God for his speedy recovery but also his family, his friends and of course his fans.

It seems Hart is certainly on the mend.

Since his appearance at The People's Choice Awards, Hart has been spotted out and about. On Monday he attended the LA Clippers basketball game, and made his courtside presence well and truly known... Hart certainly hasn't lost his funny side during the ordeal. Continue scrolling to read about how he hilariously trolled long-time pal, Dwayne Johnson with his Halloween costume.