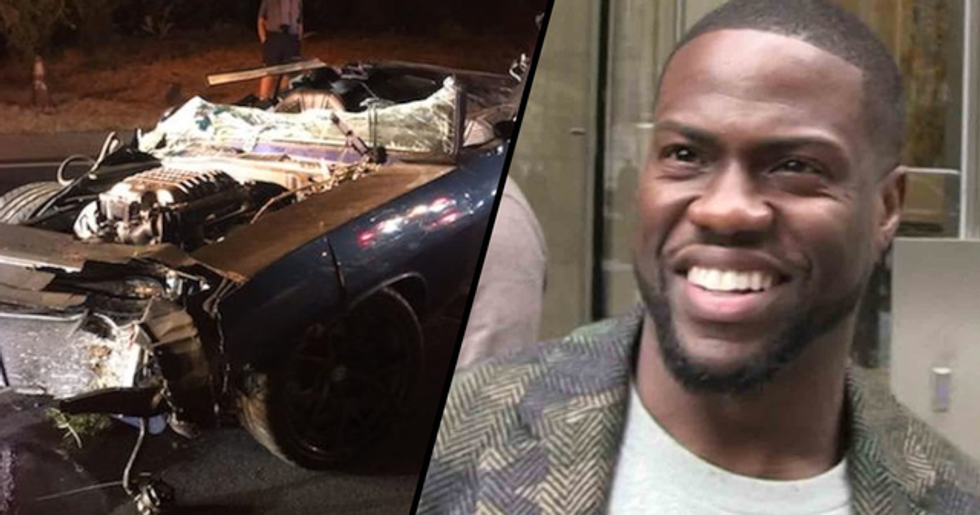 In the early hours of September 1st, comedian and actor, Kevin Hart, was involved in a major road traffic accident and sustained "serious injuries" as a result.

Hart was accompanied in the vehicle by 2 other people and managed to escape the written-off car, which had been rolled over onto its back, to find help. Though it is a miracle that no one died in the horrific accident, it has been continuously reported that Hart and his friend, Jared Black, both suffered "major back injuries."

Hart underwent major back surgery following the crash, and the actor reportedly has a gruelling road to recovery ahead of him.

However, news has just come in now that Kevin has finally been released from the hospital, nearly 2 weeks after the accident. Keep reading to hear the full story, and to find out the update on Kevin's recovery.

But, 2 weeks ago, devastating news came in about the star.

Though on that fateful night, Hart wasn't actually driving his car.

Pictures of the scene emerged shortly after the crash...

And they highlighted just how violent the accident really was, as the fence on the side of the road lays in tatters.

People from all over the world sent their condolences.

And his huge fan base took to Twitter to send him their well-wishes.

His fans prayed for him to make a full recovery.

And people from around the world hailed the star as "an icon, a legend, a friend."

His fate has been uncertain.

But people on Twitter have been hoping and praying that he will make a full recovery.

It has been revealed that Hart underwent major spinal surgery on September 1st, just hours after the crash. He has reportedly fractured his spine in 3 different places.

Sources told TMZ that the surgery involved fusing 2 fractures in his upper back and 1 in his lower.

And Kevin was reportedly in a lot of pain.

Although the surgery was a success, Kevin was going through hell. The source told TMZ that he had to be heavily medicated because the pain was just too intense.

Luckily for Kevin, his doctors reportedly expect him to recover, but it's going to be a long and grueling journey and he faces months of rehabilitation to get himself back onto his feet.

And, now, Kevin has finally been discharged.

Nearly 2 weeks after the accident, Kevin has reportedly been released from the hospital, a source from TMZ reports. However, he hasn't been able to go straight home, and is instead at a live-in rehab facility doing intense physical therapy to recover from his surgery.

But Kevin is reportedly grateful to be out of the hospital.

Sources with direct knowledge told TMZ that Kevin is "glad" to get out of the L.A. hospital that he's called home for the past 10 days. He has a positive attitude, saying, "I'm grateful to be alive." He's at rehab right now, and the goal, we're told, is to get him home "as soon as possible," where he can start outpatient care.Get well soon, Kevin!