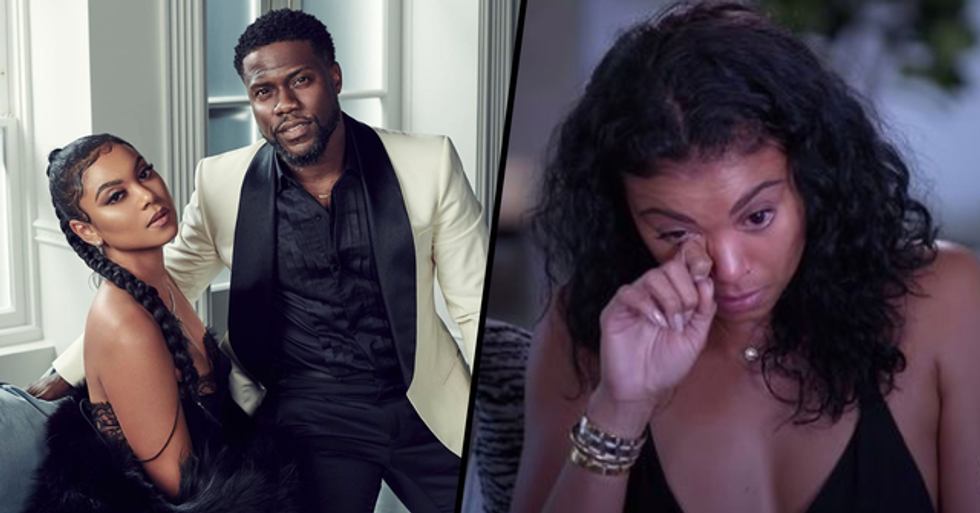 Actor and comedian, Kevin Hart, has been embroiled in a very public cheating scandal since 2017, in which he was sued by a model for filming her without her consent.

And, throughout the ongoing controversy, Kevin's wife, Eniko Parrish, has remained silent on the matter... Until now.

Eniko has finally opened up about her husband's actions in a new Netflix documentary, and her response is simply heartbreaking.

Kevin Hart has captured the attention of the world.

A couple of months ago, Hart was involved in a serious car crash that left him with a spine broken in 3 places.

Yet despite his horrific injuries, he is set to make a speedy recovery...

And people all over the world have been sending their love and best wishes to the comedian.

Bu Hart has also been in the headlines for a different reason.

And they're not good.

Hart is embroiled in a cheating scandal.

Though Kevin is married to Eniko Hart and shares 3 children with her, he has been accused of cheating and recording a private tape without the consent of the other participant.

And, to make matters worse...

He is been sued by model, Montia Sabbag, for $60 million. She has made claims that he is behind the recording of a private tape of herself and Hart back in 2017 in Las Vegas, which she was not aware of at the time.

The lawsuit is against Hart and his friend, Johnathan Todd Jackson...

She is asking for $60 million citing negligence, negligent infliction of emotional distress, and invasion of privacy.

In an interview with DailyMailTV, Sabbag spoke of how she became involved with the married actor. After initially not having plans to head to Vegas, she spoke of how she wasn't aware that Hart would be there as a part of the group.

Sabbag recalls how she met Hart...

"I had a girlfriend who invited me to go with a few of her friends. I was like, 'okay, sounds fun,'" she said. "We stayed at the Venetian hotel and we ended up moving hotels to The Cosmopolitan. I met him on the plane, I was with a friend and we had no idea he was gonna be there."

"He was with his friends. I thought he was cute, he's an attractive man, but I wasn't star-struck or anything like that, it was super casual, he was a gentleman, a nice guy," she insisted.

According to the model, there was an "instant connection"...

"It was fun, he didn't try to woo me, it was just an instant connection," she went on to say. "We just get along, we get each other, he's funny, I'm funnier. We had a connection, we had chemistry. We clicked."

She claims that the married man was intimate with her on 3 separate occasions during the trip...

"I was intimate with Kevin 3 times in the course of maybe 3 days. It was fun," Sabbag confessed.

According to Sabbag, Hart was sober the entire time...

And the tape was actually filmed during the day, and not in the evening as it has been previously suggested.

"Yes, we were intimate, I did not know he was married but I found out later. I was a little bit upset, confused about it because the way he was acting didn't seem like he was married," she explained. "But I was caught in the moment, he's an adult."

She was pregnant with their son, Kenzo, at the time that Hart was unfaithful with Sabbag. The couple are still married to this day, however, so they have clearly worked through his infidelities.

Hart made a public apology about the fling back in 2017...

This was when the scandal first unfolded - he said in his public apology on Instagram that he had made a "bad error of judgment."

He owed a huge apology to his family...

"Sending so many apologies to my wife and kids. I gotta do better and I will. I'm not perfect and I never claimed to be. I love you all," he said in a desperate attempt to make amends.

However, despite the scandal...

She is yet to address the situation...

Eniko hasn't spoken about her husband's antics, and has remained very much out of the spotlight.

Eniko has finally opened up about the situation that very well could have ended her marriage.

A new Netflix documentary is set to be released...

The docu-series, I Don't Give A F**k, has 6 episodes that delve into the misfortunes and mistakes of Kevin's colorful life.

And his infidelity to his then-pregnant wife will be addressed.

In the trailer, Kevin can be heard discussing his mistake. "These are the moments where you realize that you're not where you need to be. That road to becoming the billionaire, the mogul, it's a long road, man."

He is now holding his hands up.

He continued, "You can't think you got it all together, something stupid and come along and take it all away - like that."

Eniko has spoken about her heartache on the new docu-series.

And had finally revealed what the whole scandal was like from her end.

In the short clip, she is seen wiping her eyes...

And she cries about her husband's unfaithfulness in heartwrenching scenes. Eniko directed certain comments at Kevin as she admitted that he "humiliated" her. "You publicly humiliated me" she cried. "I just kept saying, “How the f*** did you let that happen?"

The documentary is set to premiere on December 27th.

And we will finally be able to hear the dark truth about the couple's seemingly happy marriage. For more on Kevin Hart, keep scrolling...