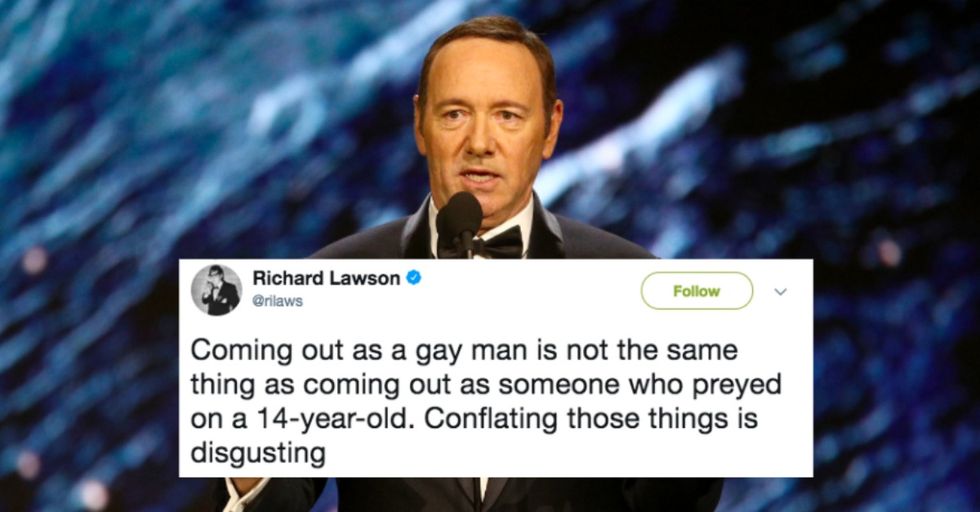 Actor Anthony Rapp told BuzzFeed News he was 14 years old when a then-26-year-old Kevin Spacey climbed on top of him and propositioned him for sex at a party at Spacey's apartment in 1986.

Rapp finally felt comfortable speaking out about his experience thanks to the brave women who've come forward with their stories of sexual assault and harassment at the hands of Harvey Weinstein, James Toback, and others.

Spacey made a statement after Rapp's allegations went public, and he used the opportunity to come out as gay. The problem with this tactic is that Spacey perpetuated the harmful, false stereotype that gay men are sexual predators by using his gayness as an excuse for his pederasty — to be clear, Spacey's penchant for inappropriately propositioning minors is 100 percent unrelated to his homosexuality. Many are rightly furious that he conflated the two.

Actor Anthony Rapp is best known for his roles in Star Trek: Discovery and Rent (both the original cast and the movie cast), but he's had a long and prolific theater career as well.

It was while he was acting on Broadway when he was 14 that Rapp met fellow stage actor, Kevin Spacey. Spacey invited Rapp to a party he was hosting, and Rapp accepted his invitation. Rapp, who was much younger than anyone at the party, quickly became bored and found himself watching TV in the bedroom. After a while, Rapp noticed Spacey standing in the doorway. Everyone else had left the party. That was when, Rapp said, Spacey "picked me up like a groom picks up a bride over the threshold." He describes that Spacey put him on the bed, lied down on top of him, and was "pressing into" him and "tightening his arms." Somehow, he squirmed away and left the apartment. The experience has haunted Rapp ever since.

Though Spacey did not return BuzzFeed's numerous attempts to reach him for a comment, he took to Twitter once the story was published and offered this statement:

Spacey claims not to remember the encounter and writes it off as "inappropriate drunken behavior." But it's the second paragraph of Spacey's statement that has caused an uproar. "This story has encouraged me to address other things about my life," he wrote. While he said he has had relationships with both men and women, Spacey wrote, "I choose now to live as a gay man. I want to deal with this honestly and openly and that starts with examining my own behavior."

This sort-of apology is dangerous for multiple reasons.

One reason is that Spacey seems to be trying to victimize himself here. He's been so "protective" of his privacy, and he uses this story of Rapp's sexual assault to address rumors that have been swirling about him for years instead of to take responsibility for his beyond-inappropriate actions. Yes, it's been one of those "open secrets" in Hollywood for years that Kevin Spacey was gay, or at least that he had a habit of hitting on men. In 1997, Esquire magazine's profile of Kevin Spacey was called, "Kevin Spacey Has a Secret," and it "strongly implied that the actor is gay." In 2000, Star magazine published grainy paparazzi photos of Spacey with an "unknown male friend." Yet the actor always remained tight-lipped about his personal life. Coming out now, in light of these accusations, is at best extremely irresponsible, at worst a manipulative distraction from the truth.

The truth is that being gay and preying on underage men are two completely separate, different things.

Spacey's actions toward Rapp were much more than "inappropriate drunken behavior," as he puts it in his apology. They were pederasty. Anthony Rapp was 14 years old at the time of this incident. The picture above is from the playbill of the play he was acting in at the time. He was a child. And Spacey was a grown man. "The older I get, and the more I know," Rapp told BuzzFeed News, "I feel very fortunate that something worse didn't happen. And at the same time, the older I get, the more I can't believe it. I could never imagine [that] anyone else I know would do something like that to a 14-year-old boy."

After Spacey made his statement, many were quick to point out that Spacey's behavior with an underage man is in no way related to his coming out as gay.

The psychology of the closet is dark and cruel and self-punishing. That Spacey has dwelt in that for years is sad.… https://t.co/qnzl2ad3Go
— Richard Lawson (@Richard Lawson)1509336771.0

Richard Lawson's powerful thread acknowledges that living your life in the closet, especially in Hollywood at the time Kevin Spacey became famous, is "cruel and self-punishing." But Lawson also points out that "Coming out as a gay man is not the same thing as coming out as someone who preyed on a 14-year-old. Conflating those things is disgusting."

Spacey's statement is dangerous because it uses his drunkenness and his homosexuality as an excuse for his assault of a child.

There’s the “alcohol made me into a pederast” bit, and then Spacey making his identity the story. Both are foul, and a gift to homophobes.
— Jamil Smith (@Jamil Smith)1509337178.0

Neither of those is related to Spacey's awful behavior. Both give in to harmful, outdated notions of what "being gay" means and allow homophobes to spread their lie-based prejudices like wildfire.

A person's sexuality has nothing to do with whether or not that person is a sexual predator. Say it again.

Spacey using Rapp's allegations as his platform to come out endangered the gay community, which has fought off these false stereotypes for so long.

As Ashlee Marie Preston says, "Stay on topic." Spacey's coming out, whether deliberately so or not, is a distraction from the fact that he's a sexual predator who preyed on an underage boy, not an excuse or a factor in the story.

Spacey's statement makes it clear that he takes no responsibility for his actions that night.

Instead, he tried to shift the blame to alcohol and his homosexuality. Don't let him do that.