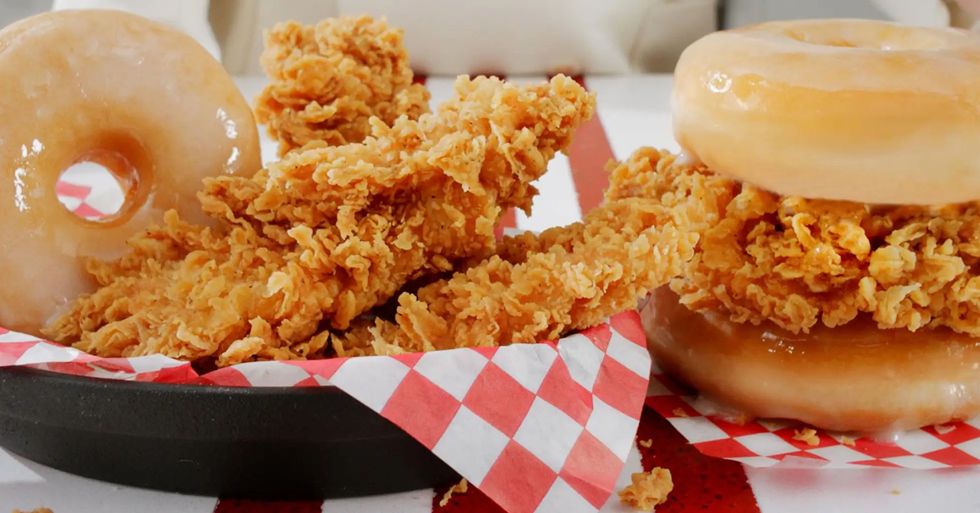 Just when you thought fast-food restaurants had thought of everything, something launches that truly stops the internet in its tracks. Such was the reaction when KFC dropped what must be the most unhealthy food item of all time.

If fried chicken and bread just isn't cutting it anymore, then boy, do they have a treat for you...

Keep scrolling for all the details, including how to bag a major freebie.

KFC is predominantly known for one specific menu item.

The clue's in the name, after all - Kentucky Fried Chicken.  And it's safe to say that they absolutely dominate in this specific area.

But KFC's latest launch might be their most controversial yet.

The chicken restaurant is hardly a paean to clean eating - but even hardcore fried food fans are cringing a little at the latest drop.

A chicken burger is hard to beat.

But KFC seems to be endlessly attempting to improve on a classic - by any means necessary.

When fast-food restaurants across the board decided to do away with a bun, and replace it with (you guessed it) more chicken.

But their latest bread replacement?

Well, it's even more bizarre. Because now, KFC has replaced their usual bun with not one, but 2, delicious glazed donuts.

Ringing any bells? Well, the item actually went viral last year... However, at the time, the item only launched in selected areas for a limited period at more than 40 locations in Norfolk and Richmond, Virginia, and Pittsburgh.

Why exactly would you think combining two delicious items could improve either of them?

But things aren't quite as crazy as we'd thought.

The item is actually chicken with donuts, rather than chicken in donuts. We guess it's like getting lunch and dessert at the same time.

But for the truly deviant...

You can absolutely create the sandwich of your dreams - or your nightmares.

Although many people thought the whole thing was one big conspiracy theory.

Perhaps KFC is using this as a test to see quite how little disregard we all have for our general health - and, in fact, lives.

If you can survive this sandwich, we guess you can probably do just about anything.

It was the talk of the town (or should we say Twitter), to say the least.

Especially considering the bargain price. The chicken donuts cost $5.50 for one donut and $7.50 for two. You can also go for the sandwich for $6 or add one hot donut to any meal for just a dollar.

But some people felt really let down.

The relatively small area of distribution meant many chicken and donut lovers were forced to go without - unless they fancy a pilgrimage.

KFC have announced this week that the infamous sandwich is being rolled out nationwide. "Chicken & Donuts is the newest fried chicken trend we're bringing to all of America," Andrea Zahumensky, the chief marketing officer at KFC US, said in a press release. "It's a finger lickin' good dish filled with glaze and glory."

The sandwich will be available through March 16 or until stocks last.

There's also a chance to bag some freebies... KFC plans to open a pop-up shop from 10:00 a.m. to 3:00 p.m. on February 22, located at 615 North La Brea Avenue in Los Angeles, with the first fifty customers receiving a free order of 6 tenders and 6 doughnuts. Interested in more fast food news? Keep scrolling to learn all about Wendy's exciting new launch.
20%