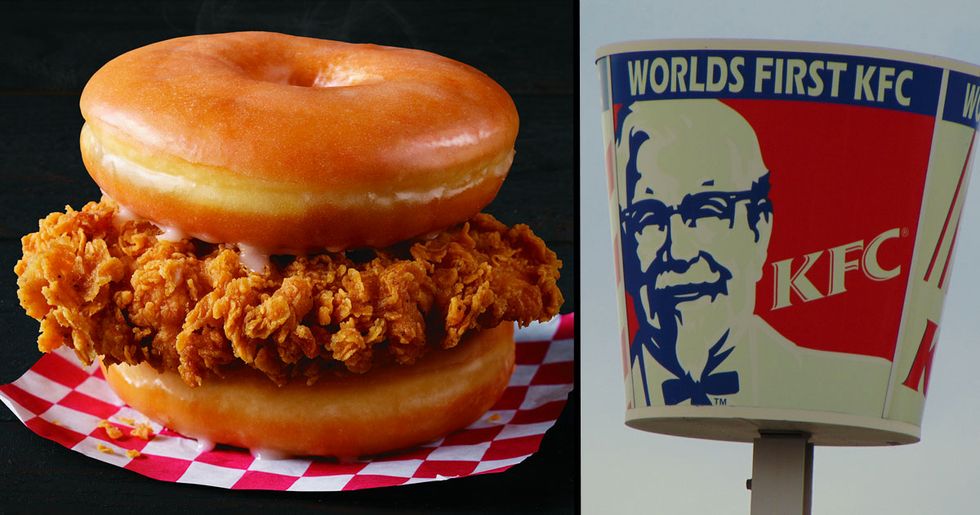 Just when you thought fast-food restaurants had thought of everything, something launches that truly stops the internet in its tracks. Such was the reaction this week when KFC dropped what must be the most unhealthy food item of all time. If fried chicken and bread just isn't cutting the mustard anymore, then boy, do they have a treat for you.

The "donut sandwich" consists of a piece of signature recipe chicken between not one, but two individual glazed donuts. While it sort of appeals to our basest instincts, it's also been a pretty controversial launch. For the best of the internet's reactions, read on.

KFC is predominantly known for one specific menu item.

The clue's in the name, after all - Kentucky Fried Chicken.  And it's safe to say that they absolutely dominate in this specific area.

But, like any good business model, they've got to keep expanding their horizons.

And their latest launch is something a little outside of the box - but, equally, something very, very exciting.

And this isn't your average mac and cheese, either. It's got that signature KFC twist, with the addition of fan-favorite popcorn chicken sprinkled on the top. The sauce also features a three-cheese blend.

Although one Twitter user pointed out that this menu item sounds like the stuff that stoner dreams are made of.

And it seems the mac and cheese trend is set to continue.

Cheese-heads may only be able to get this item in a limited capacity, but Chick-fil-A added mac & cheese to their permanent menu earlier this year.

But KFC's latest launch might be their most controversial yet.

The chicken restaurant is hardly a paean to clean eating - but even hardcore fried food fans are cringing a little at the latest drop.

A chicken burger is hard to beat.

But KFC seems to be endlessly attempting to improve on a classic - by any means necessary.

When fast-food restaurants across the board decided to do away with a bun, and replace it with (you guessed it) more chicken.

But their latest bread replacement?

Well, it's even more bizarre. Because now, KFC has replaced their usual bun with not one, but two, delicious glazed donuts.

And here's the item.

The item is set to launch for a limited time at more than 40 locations in Norfolk and Richmond, Virginia, and Pittsburgh.

Some people are finding the item pretty confusing.

Why exactly would you think combining two delicious items could improve either of them?

But things aren't quite as crazy as we'd thought.

The item is actually chicken with donuts, rather than chicken in donuts. We guess it's like getting lunch and dessert at the same time.

But for the truly deviant ...

You can absolutely create the sandwich of your dreams - or your nightmares.

Some people are feeling pretty excited.

Especially considering the bargain price. The chicken with donuts will cost $5.50 for one donut and $7.50 for two. You can also go for the sandwich for $6 or add one hot donut to any meal for just a dollar.

But some are feeling a little annoyed.

The relatively small area of distribution means many chicken and donut lovers will be forced to go without - unless they fancy a pilgrimage.

Some feel kind of conflicted.

Although some have made this valid point.

I'm not one to bang the drum with "clean eating" but this sounds absolutely horrendous https://t.co/ILwrwewR39
— Newsquawk (@Newsquawk)1568729939.0

There's a healthy skepticism when it comes to fad diets, and then there's eating fried chicken and donuts at the same time.

If you can survive this sandwich, we guess you can probably do just about anything.

In fact, could this be a conspiracy theory?

Perhaps KFC is using this as a test to see quite how little disregard we all have for our general health - and, in fact, lives.

Last month, Popeyes went viral with their chicken sandwich. Perhaps KFC is backpacking off the trend - and we can't wait to see what happens next. Interested in more fast food news? Keep scrolling to learn of a potential new McDonalds launch that's got the internet excited.