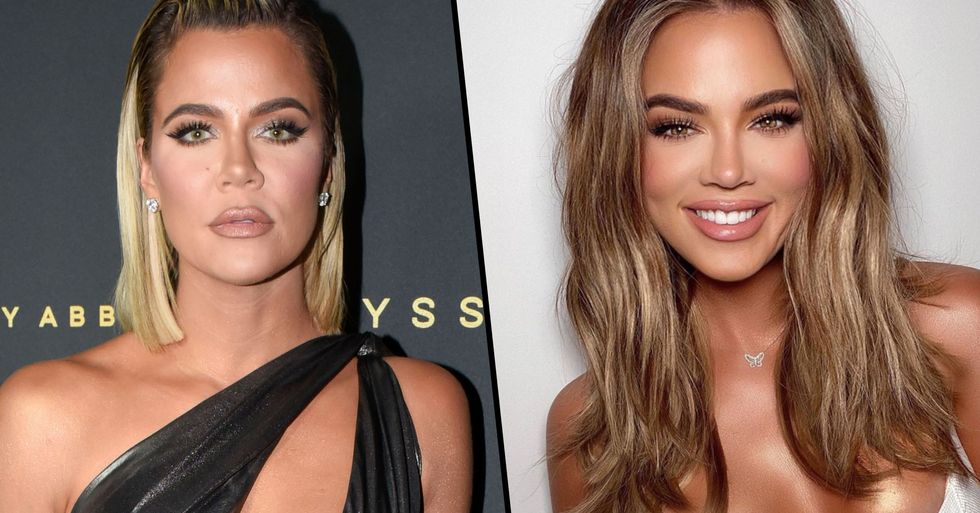 Khloe Kardashian has posted another unrecognizable selfie, and fans have spotted a tell-tale sign of photo-editing. But now they've come up with a theory as to why she posted the photo in the first place and it truly is heartbreaking.

Keep scrolling to see what they had to say...

Khloe Kardashian has started to look more and more unrecognizable over the years...

And fans now think they've sussed out her drastic appearance change from a recent Instagram selfie.

And her most recent Instagram selfie has caused a huge internet debate...

Because fans are convinced Khloe has edited the hell out of it.

The selfie in question looks absolutely nothing like Khloe...

And eagle-eyed fans believe that they've spotted something that gives away that the snap is just one big edit.

There's something fishy about the necklace she is wearing...

And fans have noticed that the chain appears to be missing on the left-hand side.

Khloe's skin is noticeably glowing in the selfie...

Meaning it is almost certain that she has edited the picture to make her skin appear to be silky and flawless... all whilst accidentally erasing the necklace chain around her neck.

For many, this selfie is confirmation of all of the work Khloe has had on her face...

@barstoolsports @KFCradio @KFCBarstool Their plastic surgeon has done some crazy ‘jaw bone shaving” and fillers on them for years.
— RealSunny20 (@RealSunny20)1590261788.0

And fans aren't fooled at all.

But it seems as though fans have developed a wild theory as to why she keeps drastically changing the way she looks.

According to a lot of Khloe's fans, the social media star keeps "amending" her appearance in order to look more like her older sisters Kim and Kourtney.

Rumors have been circulating that Khloe is actually the daughter of former football star OJ Simpson...

And that is the alleged reason why she doesn't want to look anything like her father or that side of the family. Even though the rumors have been denied, they continue to swirl around that Khloe is actually the result of an affair between Kris and OJ.

One fan wrote this:

But it's hard when millions of people continue to separate Khloe from the rest of her sisters.

This is the unconsciously violent outcome of a social media-obsessed society. During the pandemic, it seems as though the Kardashians still manage to find a way into the headlines. Keep scrolling to find out why...
20%

$33.95 $27.16
Buy Now
See More Deals
We hope you find these deals as awesome as we do! Just an FYI: we may receive a share of sales from links on this page