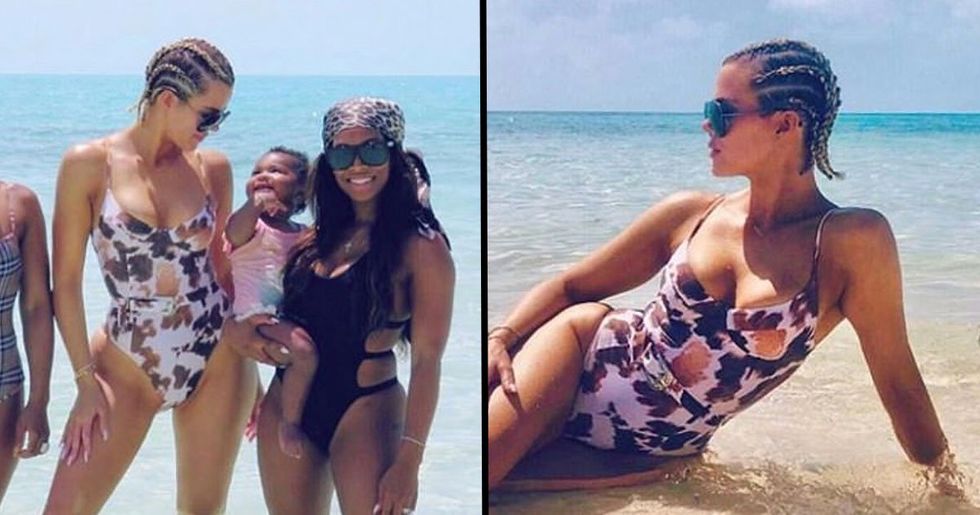 The Kardashians have never been afraid to be experimental in their styles. In fact, more often than not, it seems that they choose their looks to attract attention, rather than to actually look good. But one thing that they've been repeatedly criticized for is their lax attitude to one aspect of fashion. The superstar sisters are keen to try out experimental styles, regardless of their history and this often leads to claims of cultural appropriation - where being trendy is placed at a higher importance than any social impact.

The latest problematic move that a Kardashian has made? Well, it was youngest sister, Khloe, who made the blunder. While holidaying in Turks and Caicos for big sis, Kourtney's, fortieth birthday, Khloe posed on the beach with a pretty controversial hairstyle. And the internet absolutely had something to say about it.

But there's one thing that they just can't seem to get right.

There's one aspect of the Kardashian family that even true stans have a hard time accepting.

The reason? The family seems to have a pretty relaxed stance on the rather serious issue of cultural appropriation.

One of the sisters is the prime culprit.

Kim Kardashian has landed in hot water on multiple occasions for her culturally insensitive hairstyles, in particular.

For example, this crimped ponytail debacle.

Although many claim that it was actually Vogue who were at fault for crediting Kim with a style that women of color had long been rocking.

But that hasn't been Kim's only issue.

She also came under fire for wearing her hair in braids, a style typically used for protective reasons by people of color.

And to make matters worse.

She referred to the style as "Bo Derek braids," effectively attempting to erase the cultural significance of the look.

This level of cultural insensitivity is hugely problematic, especially for a family with such a huge profile in the media.

And Kim is a repeat offender.

She also donned this outfit and headdress which many claim was hugely offensive - particularly when combined with her "Sunday Service" caption.

But Kim isn't the only culprit.

Khloe has also come under fire with claims of cultural appropriation. People especially weren't happy with the wig that she wore to Diana Ross' birthday party.

And it seems she hasn't learned her lesson.

Because Khloe is back in the news this week - and for all the wrong reasons!

The story started after she posted some snaps on her Instagram.

Khloe was relaxing on a beach in Turks and Caicos, to celebrate the birthday of her sister, Kourtney.

But fans noticed something about the images.

Khloe wasn't sporting her signature sleek do - instead, she had opted to style her hair in cornrows.

Khloe posted a huge number of these cornrow-styled images to her Instagram - in spite of what some people had to say.

And commenters didn't hold back.

It's clear that many felt very strongly about Khloe's choice of hairstyle - and thought that she needed to know their opinions.

In several snaps, she was with daughter, True, and her best friend. Some of the comments mention the fact that many of those close to Khloe are black.

But, obviously, this isn't an excuse.

One commenter wrote, "Having a black kid doesn't give you permission to appropriate black hair, you know. Just saying ..."

Other comments cut straight to the point.

One commenter wrote, "You not black stop with these hairstyles. It's a mockery and it's not cute." Others added, "Those cornrows AIN'T IT," and, "You ain't black sis!"

Although not everyone was quite so harsh.

A fan commented, "Love that people are embracing our African roots and culture. When you rock braids, remember where it came from."

Khloe is yet to speak out on the backlash.

Although judging by her Instagram, we don't think that the criticisms have gone unnoticed.

She posted some different images following the uproar.

In a few of them, she has shielded her controversial hairdo with an oversized hat - perhaps a tactic to avoid further backlash.

Her braids took on a slightly different look, too.

In this shot, with big sister Kourtney, it looks more like Khloe is wearing her hair in four French braids, rather than full cornrows.

Nonetheless, there's no getting away from the issue.

Whether this particular example stands up or not, cultural appropriation is a huge issue - and one which the Kardashians are perpetuating.

But some have chosen to stand up for Khloe.

Many view the idea of cultural hairstyles as intrinsically problematic and claim that policing how people style their hair isn't the answer.

In fact, many have come out in support.

People aren't convinced that Khloe's style was actually appropriated - while others still think that cultural appropriation isn't really an issue.

And it seems that Khloe is largely unbothered.

She hasn't addressed the controversy at all and it seems like she's still wearing the cornrows.

While we're sure that Khloe didn't mean her style to offend, it's still worth being cognizant of.

If something seemingly trivial like hair is causing people such offense, it's probably not worth stubbornly insisting that it's okay.