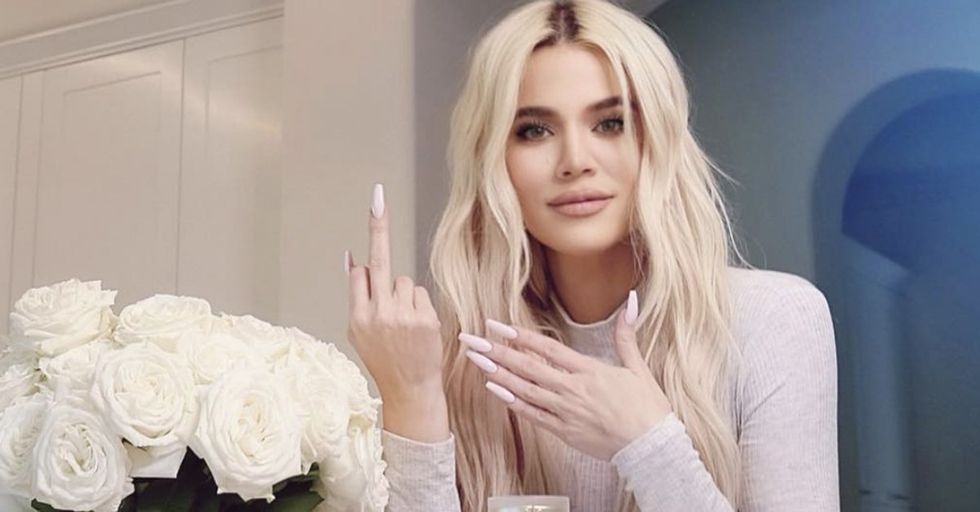 The ongoing Kardashian-Jenner saga is a rich tapestry woven out of drama contouring products, political intrigue, sponsored Instagram ads, high profile romance, infidelity, and an ungodly amount of money. There are new characters, rivalries, and stakes at play with every passing hour, so it can hard to keep up with each development if you’re not glued to your Kardashian Google Alert.

The latest headlines being made by the family famous for its scandals center around the often perilous romance between Khloé Kardashian and professional basketball player Tristan Thompson. The relationship has long been tested by rumors and some pretty convincing evidence of Thompson’s unfaithfulness but reports recently surfaced with allegations that the athlete had cheated on Khloé with Jordyn Woods, a long time family friend and one of Kylie Jenner’s closest confidantes.

The news sent shockwaves through the Internet, which has been reacting in the way it typically does — by making memes, forming opinions without any evidence, and ensuring every piece of speculative news goes viral. The attention to the unfortunate situation prompted producers of The Bachelorette to suggest Khloé would be the show’s next titular contestant, a rumor the Kardashians have not taken lightly.

It’s been a minute since the Kardashians made headlines.

And when I say a minute, I don’t mean it euphemistically – I mean it literally can’t have been more than 60 seconds since the family fascinated the world with a fresh piece of hot gossip.

Every Kardashian-Jenner story shares one major thing in common.

They all are extremely complex and require knowledge of the intricate, ever-growing family tree. For those who aren’t in the know, I’ll back up a little from this latest headline for context.

The last year has seen some big Kardashian milestones.

Kim and Kanye just announced that they are expecting a fourth child via surrogate to join a household that includes daughters North and Chicago, and son Saint.

Kylie Jenner celebrated the first birthday of her daughter Stormi...

...whose existence was successfully kept secret for months while Kylie was in hiding last year.

Khloé Kardashian and partner Tristan Thompson also had a baby in April of last year.

But not before Thompson was caught on video getting a little too close to a number of unidentified women in lounges across the country. Kissing, dancing, groping – you know, stuff fathers typically don’t do with women who aren’t the mother of their child, days before they're born.

This all came after the athlete left his previous partner, Jordan Craig, for Khloé.

Thompson’s ex was pregnant when he and Khloé started dating in September 2016, leading many to speculate that he had been unfaithful.

Despite his suspicious history, the family was shocked to discover Thompson had cheated on Khloé.

The news was devastating to the new mom, who had already dealt with a cheating scandal at the hands of ex-husband Lamar Odom.

Thompson claimed the video was a set-up.

The athlete told Khloé that he was an innocent among aggressive groupies, and the family gave him the benefit of the doubt.

So the two seemed to have worked things out.

After all the dust settled, the new parents were seen out together again and were assumed to have patched things up in the name of supporting their new daughter, True.

Not a year later, the athlete is making headlines with another cheating scandal.

Tristan’s nightclub flings are old news, but this one hits close to home.

The athlete allegedly hooked up with Jordyn Woods.

The illicit event allegedly occurred at a house party.

Thompson was seen making out with another guest, who was later identified as Woods.

When news broke, the NBA star tweeted that it was “FAKE NEWS" in a now deleted post.

Khloé hasn’t released an official statement on the event.

But she hasn’t been silent either. The mother of one responded to a "Hollywood Unlocked" Instagram post about the event with eight “talking" emojis, presumably to signify that the post was speaking the truth.

In the age of social media, that’s a pretty official statement.

Khloé’s loved ones have also released some cryptic messages, like a video of Kim Kardashian singing Nivea’s, “Don’t Mess With My Man" that was directed at Woods.

It’s an unfortunate event and huge breach of trust, but sources say Khloé is moving on fast.

She apparently hasn't spent quality time with Thompson for a while and had virtually given up on trying to make plans for the future after his many infidelities.

Her independence has sparked rumors that Khloé could already be looking for love again.

Some began suggesting the reality star appear as the next TV Bachelorette to meet her match.

The creator of The Bachelor, Mike Fleiss, soon chimed in.

Any decision regarding @khloekardashian as the new #TheBachelorette will need to be approved by my dear friend @KrisJenner ...
— Mike Fleiss (@Mike Fleiss)1550767880.0

He seemed pretty into the idea, and why wouldn’t he be? A Bachelor and Keeping Up With The Kardashians crossover would be the biggest event in reality television history.

It didn’t seem that unlikely, either.

Could Khloé Kardashian Be the Next Bachelorette? Only If Kris Jenner Approves, Says Mike Fleiss https://t.co/i2SW5kN3vw
— People (@People)1550864013.0

Kris Jenner is a known fan of The Bachelor series, and has been quotes calling Fleiss a “good friend."

The show’s host Chris Harrison got involved too.

Fans of the show were divided on whether to crown Khloé as its next Bachelorette.

@fleissmeister has been locked in his room for 3 days binge watching Kardashian’s. All I hear is sobbing. It’s not… https://t.co/Mka3TXemWh
— Chris Harrison (@Chris Harrison)1550858173.0

The show was tearing fans apart, and drumming up tons of press with the Khloé rumor.

I have already been in contact with my dear friend @KrisJenner about @khloekardashian as #TheBachelorette . Stay tuned!!!
— Mike Fleiss (@Mike Fleiss)1550857855.0

Fleiss claimed he was in talks with the family regarding the possibility of Khloé’s appearance on the show.

With the rumor reaching fever pitch, Kim decided to clear things up.

Those five simple words spoke volumes. A Khloé season of The Bachelorette would never be.

The show creator claimed Kim wouldn’t know whether it was true or not, as Khloé would have been sworn to secrecy.

But Kim still wasn’t having it.

She clearly came to fight. And obviously, as Khloé’s sister, she was going to win.

The multi-hyphenate multi-millionaire had proof Fleiss was lying.

Kim returned swiftly with screenshots of a text message thread between Khloé, Kris and herself that totally invalidated the show creator’s tweets.

Eventually, Khloé weighed in on the whole mess.

And she was not happy. Khloé threatened legal action against Fleiss if he did not stop fueling the false story.

Fleiss said he was acting in good faith.

The Bachelor creator responded with a sentiment that he was attempting to help Khloé find true love. Yeah, it was as creepy as it sounds.

He kind of wouldn’t back down.

I sincerely offered our assistance. If a certain someone thinks he/she doesn’t need our help to find true love, so be it!!! #TheBachelorette
— Mike Fleiss (@Mike Fleiss)1550984882.0

Fleiss shot off a series of tweets defending his honor and dismissing Khloé’s legal case against him. “You can not be sued for trying to help somebody find true love... Just saying,’" he tweeted.

Then he did the worst thing you can do when trying to save face. He insulted her.

One of the things we look for in choosing #TheBachelorette is a great sense of humor... Might be time to look elsewhere.
— Mike Fleiss (@Mike Fleiss)1550978221.0

Yeah, people typically aren’t in the mood for a laugh at their expense when they’ve been publicly humiliated by the father of their child for over a year, no matter how rich they are. Here’s to hoping Khloé gets a break from the limelight sometime soon.