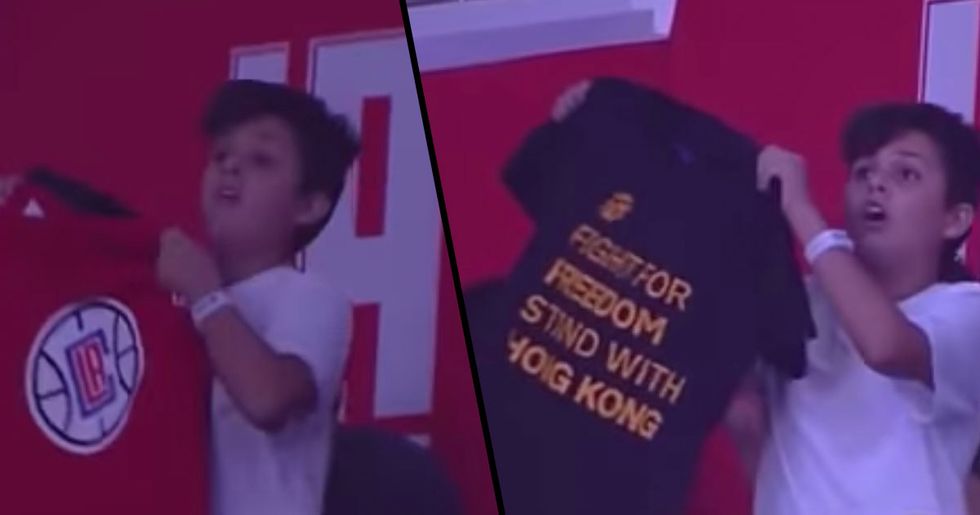 And the last 10 weeks, in particular, have seen increasingly violent clashes between protesters and police - airports were forced to suspend hundreds of flights as a result of these protests.

As protesters in Hong Kong remain unwavering and defiant in their beliefs, tensions are beginning to run high across the rest of mid-land China - so high, in fact, that the Chinese military seems to be preparing for the very worst.

Support has flooded from all parts of the world, however, and one young boy in LA has shown his support in the most imaginative and effective way...

Hong Kong is unique from any other Chinese city. It was originally a British Colony until the Chinese handover of 1997. Though it became a part of the People's Republic of China, Hong Kong was able to keep its own unique legal system, currency, and borders to separate it from the rest of the country.

In the late 20th century, 3 Chinese territories remained beyond the control of the Chinese Communist Party, with Hong Kong being one of them. It was acknowledged that, by imposing China’s political system on 2 colonies, panic and economic mayhem could be caused. Therefore, “one country, two systems" would allow the territories to remain much as they were while keeping their independent legal systems and police forces.

Numerous reports of shocking violence from both the protestors and the police were coming in thick and fast over the last few months.

Demonstrators arrived at Hong Kong Airport and initiated a peaceful sit-in. They initially staged a mass sit-down, and simply handed out pamphlets about the issue to visitors. However, the peace didn't last long.

3 days into the sit-in and in response to the police brutality experienced over the weekend, protestors changed their tactics.

By mid-afternoon, demonstrators had started blocking passengers from checking in and moving through the departures area, prompting the airport authority to suddenly cancel the hundreds of flights coming and going from the airport, which is one of the busiest in the world.

The crisis is far from over. Hong Kong’s pro-Beijing leader, Carrie Lam said a few weeks later that the city had been placed on a “path of no return" after 10 weeks of the disruptive and violent protests.

And now with this new footage that has gone viral, we can see the extent to which protesters are going to, in order to make their point heard.

A video of a protester fly-kicking a police officer made global headlines.

Dressed as something closely resembling a ninja, the protester appeared on the scene as another one of his fellow squad members was being tormented by an officer with a baton and shield.

The authorities are taking these protesters seriously.

Chinese authorities, who recently denounced protests as “terrorist acts," have promised an “iron fist" response to the protestors. In this current climate, we can only hope that the issues growing within the conflicted country can be resolved peacefully, with no further violence or brutality.

A peaceful resolution is almost impossible in today's climate, and with many countries being stuck in the middle of China's and Hong Kong's conflict, feathers are bound to be ruffled.

The NBA found itself caught between two cultures after a tweet about the Hong Kong protests sparked criticism from China, which threatens the U.S. basketball league’s expansion efforts in its most important international market.

The damage was done between China and the U.S...

The controversy erupted after Daryl Morey, general manager of the Houston Rockets, one of the most popular U.S. basketball teams in China, appeared to support Hong Kong demonstrators in a tweet that has since been deleted.

The fallout was swift following Morey’s tweet, which contained an image that read “Fight for Freedom. Stand with Hong Kong."

For the Chinese, the incident is seen as the latest example of a Western organization challenging the nation’s sovereignty over its territory.

Morey has since apologized for the now-deleted tweet, but China has backtracked from its relationship with the league regardless.

Morey appeared to have support from other NBA members...

Morey's tweet caused a reaction by LeBron James, who called the GM's tweet "misinformed." James, of course, was in the Staples Center during Tuesday's game between the Lakers and Clippers, so the topic was relevant.

James wasn't the only one with a strong opinion at the Staples Center on Tuesday...

A young boy was filmed on the Dance Cam segment on Tuesday and he was, at first, filmed holding 2 separate shirts. In front was a red Clippers shirt, but beneath that was a black shirt with yellow text that reads Morey's phrase: "Fight for Freedom, Stand with Hong Kong."

The young boy was victorious.

The boy, later identified as Matan Evenoff, swiftly switched gears when he pulled out the “Fight for Freedom, Stand up for Hong Kong" and pumped his fist in the air when he realized he was caught on camera - which very quickly turned away from him when he pulled it out.

There was already a protest underway...

Before the game started, Hong Kong supporters were demonstrating with a protest just outside the Staples center handing out the T-shirts for free, which is where Matan more than likely got the shirt.

This demonstrates the world-wide support that Hong Kong is receiving...

Even young children are aware of the current problem, and this hopefully, means that more and more are jumping on board to support Hong Kong during this difficult time.