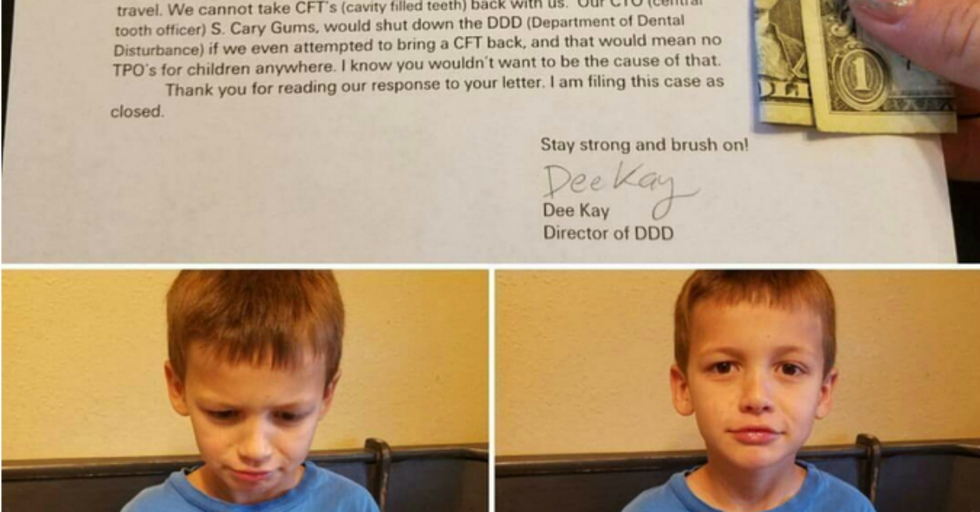 Not to be all "When I was a kid..." but, when I WAS a kid, we accepted what the Tooth Fairy gave us. A quarter? A dollar? An empty bottle of Jim Beam that suspiciously smelled like my father? Didn't matter. We were grateful for what we received and even if we weren't, we tried our best not to let it show.

But I guess that times truly have changed.

A recent Reddit thread has clued us in on the story of a seemingly very perturbed young man who went back to the cash-well one too many times. But was he taught a lesson? That is what many online are currently debating.

In this case, one dollar. Not bad. I mean, this isn't supposed to be a money-making operation after all. It's a little reward for the pain and suffering that comes from losing one of your precious little chompers. Nothing more, nothing less.

But in his eyes, it was so much more than that. The sweet young lad decided to take matters into his own hands and wrote the Tooth Fairy a letter asking for MORE MOOLAH!!!

Listen, I'm pretty new to this parenting game, but if my kid ever turned his or her nose up at the Tooth Fairy and asked for more money, guess what would happen? That's right: No money. But that isn't what happened here...

After receiving the boys note, an "associate" for the Tooth Fairy replied to the boys letter. The response was, in the mind of many...troubling.

"Dear (redacted), My name is Dee Kay. My associate Tooth Fairy told me about your letter and I have been assigned to your case, #092208-5. We have removed out Plaques from the wall, going 3 years EWI (extraction without incident), in order to focus and resolve your case. It looks as though need to Brush Up on our extraction skills, and the going rate for teeth."

The note continued: "One thing we do agree on and have taken into consideration, it was very bold of you to ask for more money. Since all your teeth have been cavity free we decided to increase your TPO (tooth pay out) by $1 for future extractions."

"This is with the stipulation the tooth is cavity free. Should you place a cavity filled tooth under your pillow you will receive a bill to cover our costs of flight travel. We cannot take CFT's (cavity filled teeth) back with us. Our CTO (central tooth officer) S. Cary Gums, would shut down the DDD (Department of Dental Disturbance) if we even attempted to bring a CFT back, and that would mean no TPO's for children anywhere. I know you wouldn't want to be the cause of that. Thank you for reading our response to your letter. I am filing this case as closed. Stay strong and brush on! Dee Kay Director of DDD."

First and foremost, bravo to the (presumed) parents of the boy on writing a very clever, very pun-laden piece. That brought many chuckles. But outside of the humor, some people did have issues with the contents of the letter, and additionally its construction.

Seriously. Landscape? We might have bigger issues than just an extra buck or two here, folks.

Additionally some were troubled that the once so independent and care-free symbol of childhood had sold out to The Man.

What kind of retirement plan does a Tooth Fairy associate get these days? I'm sure their dental plan is top-notch.

While opinions of whether his parents should have forked over the extra dollar are mixed, one major take-away from it all is that the kid got an early preview of what his future would be looking like.

And sometimes, life really does still feel like pulling teeth.