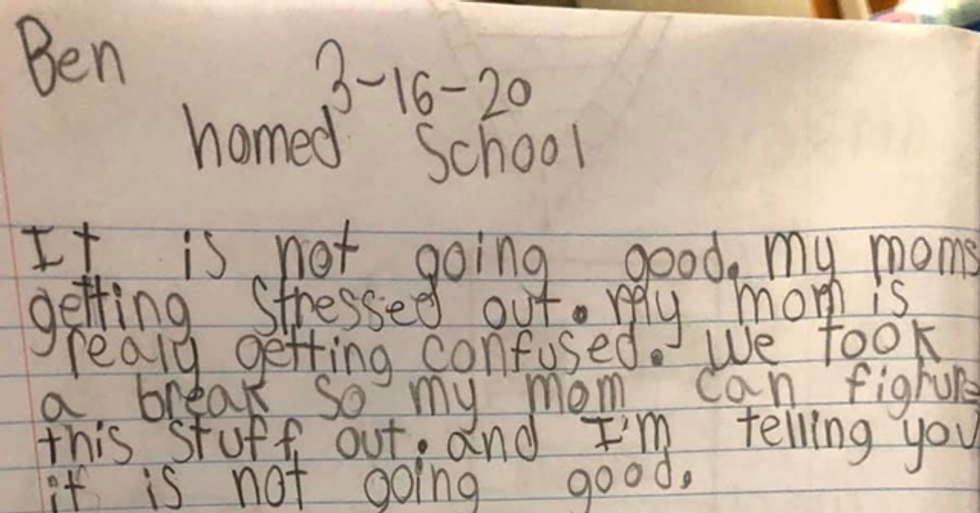 During the COVID-19 lockdown, many parents have found themselves having to homeschool their children, and some are faring a little worse than others.

A little boy decided to document his mom's efforts as a teacher in his journal, and he certainly took no prisoners.

Keep scrolling for the full story, and to read his hilarious journal entry for yourself...

It's a tough time to be a parent.

Like bringing up children wasn't already challenging enough, the COVID-19 pandemic has brought us into full lockdown.

The world has literally been brought to a standstill.

In an attempt to prevent further spread of the potentially deadly virus, several world leaders have imposed lockdowns upon their countries.

Most major stores have closed their doors...

And supermarkets have been stripped bare of their products, making it incredibly challenging to keep the fridge and the cupboards full.

And, on top of all this, schools have also been closed.

All over the world, children have been sent home from school to self-isolate in the safety of their own homes.

And here in America, several State leaders have also enforced closures upon their schools.

Our famous yellow school buses have been ground to a halt indefinitely as our fight against COVID-19 continues.

Quite understandably, many parents are struggling with these new sanctions.

As any parent will know, keeping children cooped up indoors for an extended period of time is a recipe for disaster.

And these parents have found themselves doing the very thing they hoped they'd never have to do...

With their children's schools closed down indefinitely...

Parents have been left with little choice but to educate their children themselves.

And it turns out that homeschooling isn't the easiest of tasks...

#IKnewIHadCabinFeverWhen after the first week of homeschooling, one kid suspended, one expelled, and one teacher f… https://t.co/qhpZlDgHjG
— Michael Whennen (@Michael Whennen)1585148036.0

And many parents have been coming forward to admit that they don't make the best teachers.

It's proven to be a tremendous challenge for many parents...

And these rather embarrassed "teachers" have been taking to social media to share their disaster stories with the world.

It hasn't been going too well for most parents...

Day 8 of homeschooling, I scheduled a parent teacher conference with my wife to discuss her kid being an asshole.
— Derek (@Derek)1585151878.0

I don't think any of us ever really envied our child's teachers.

Though some parents have had a helping hand...

Pets have come in as extremely handy during these dark times.

It turns out that dogs make for great teachers.

But not every parent has a four-legged helper to hand, and one has gone viral for her spectacular fail at homeschooling.

Candice Kennedy is one of the many parents homeschooling her kids.

Candice, from Kentucky, works part-time in a bakery and is mom to 3 children - Twelve-year-old Tyler, ten-year-old Emily, and 8-year-old Ben... All of whom she now has to educate from home.

Luckily, her children's' teachers have been emailing over work assignments...

And, having been a stay-at-home mom in the past, Candice felt up to the challenge. Speaking to Buzzfeed, she explained: "I was a stay-at-home mom for eleven years, so being around my kids all day and helping them learn was nothing new."

But, having 3 children of different academic levels...

Homeschooling has definitely proved a challenge for Candice. She continued: "Emily is a straight-A student who loves school, but she was overwhelmed and anxious that she wasn’t going to be able to complete everything. Tyler is extremely intelligent, but is having a hard time this year with math. He was asking me questions about his geometry homework to which I had no answers for."

So she attempted to lighten the mood. "They were getting impatient with my inability to answer their questions. I started mimicking a grown-up crying in an attempt to lighten the mood. Seeing their mom squirm and not know the answers was pretty funny to them and they were all laughing and trying to console me."

Well, she did until she read her youngest son's diary entry, that is.

8-year-old Ben had documented his mom's efforts as a teacher...

And he had taken no prisoners. The youngster had hilariously written: "It is not going good. My mom’s getting stressed out. My mom is really getting confused. We took a break so my mom can figure this stuff out, and I’m telling you, it is not going good."

Where she wrote: "Y’all I’m dying!!! This is Ben’s journal entry from Monday about our first 'homed school' day. That last sentence" alongside a series of laughing emojis.

At least the kid was being honest, right?

Since posting the journal entry, Candice's post has been shared over 300,000 times, probably by exasperated parents who can only relate to her struggles all too well. Hang in there, Candice, I'm sure you're an excellent teacher! For more on quarantined parenting, keep scrolling to read about the warning several parents have given about a new viral Tik Tok trend...