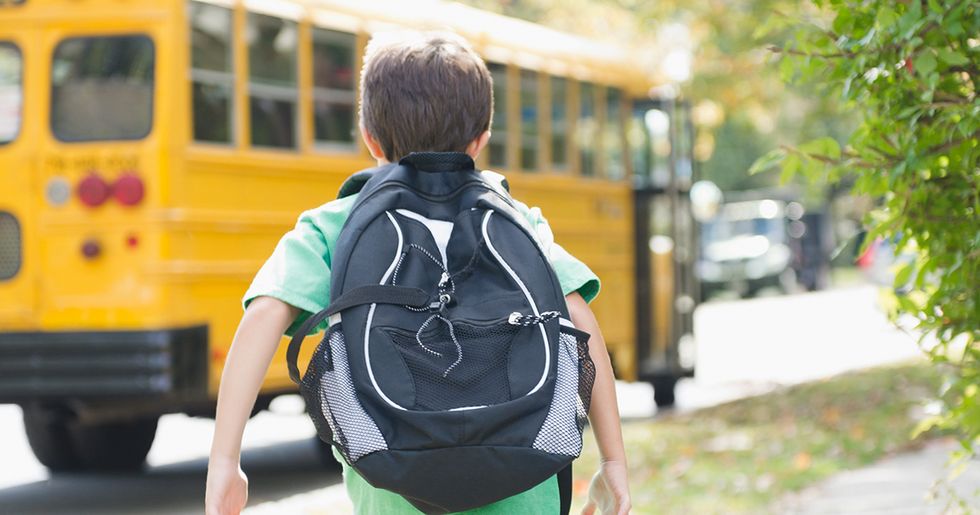 Kids do the darnedest things, don't they? Getting into trouble, bringing frogs into the house, breaking the neighbor's window with a baseball? Classic. History is full of kids doing goofy things.

But, sometimes, kids go above and beyond in the "darnedest things" department and truly deliver stories that are glorious. Today we give you one such story. It's simple: a boy missed his school bus and wanted to stay home from school. But it's also a work of such utter genius that few people could match it.

This is a story that contains perfect grammar, a beautiful pro/con list, some strong argumentation, and a few beautiful turns of phrase. If you're ready to be driven into hysterics (the good kind) by a small child, read on: this kid is going to grow up to be a lawyer, we can tell already. His strongest defense: making you laugh until you can no longer punish him.

It's a story that we all know.

When you're just a little late in the morning, running outside to catch the school bus.

We all have those days.

But some of us handle them better than others.

This is the story of a young man who handled it the best.

No seriously; everyone go home. He wins.

Our friend, Sarah (@sarahhollidayyy), on Twitter shared a beautiful memory from childhood.

And it was wonderful.

It begins "I missed the bus."

And what follows is a true work of art.

"As your son, I regret to inform you that I've missed my means of public transportation," the letter begins.

"I know you must be on a roller coaster of emotions right now, but rest assured, I've decided to stay home. This was a tough decision to make while you were gone for 20 minutes. I'm probably in my bed moping about the fact that I can't go to school, so please don't interrupt me. If you require any further assistance, please see the Pros/Cons chart on the back side."

And, of course, we have to look at that pro/con list.

Pros: -First day home this quarter, grades will be fine. -Today was gonna be a bad one, can't get over my hair.

On the other hand, there were some cons.

- Might become a habit (doubtful). -You have to call the school and tell them I've got polio.

This kid is a genius.

He gets MAJOR points for creativity.

We're not the only ones who think so.

Honestly, it was so clever that some people started making ultimatums for their own kids.

Funny or you get sent back!

A surprising number of people wanted this kid for their own.

But then they had to imagine what it would be like to make that call.

@electriccfairy @sarahhollidayyy “I regret to inform you that my son has come down with polio. he will not be able to attend school today.”
— shane is a mess (@shane is a mess)1559707784.0

Even worse is the call that comes the next day.

Gotta get me one of them iron lungs.

But then the real question came up...

What age was this hilarious child?

Because that handwriting indicates elementary school.

But the vocabulary says something else.

The truth is revealed.

He just has awful handwriting.

Even with the awful handwriting, he has some good insights.

A lot of people were impressed by the post.

The talent contained in the note indicates a strong future, amirite?

He can go wherever he wants!

Except school, that bus is long gone.

The best part is that mom herself got involved.

She has to defend her son right?

There were some people who questioned the decision, though.

There's a time wherein this wouldn't have worked!

Who needs a bus, after all?

The kid had that covered; he's got polio.

Of course, Twitter's got an answer for that.

And, of course, it's hilarious.

This kid probably worked harder on the note than some kids work all day in school.

Let's explore a few of the signs of brilliance in this note.

Wait, we can't because it's all brilliant.

Really, the only conclusion here is that this is art.

Someone get this note in a museum!