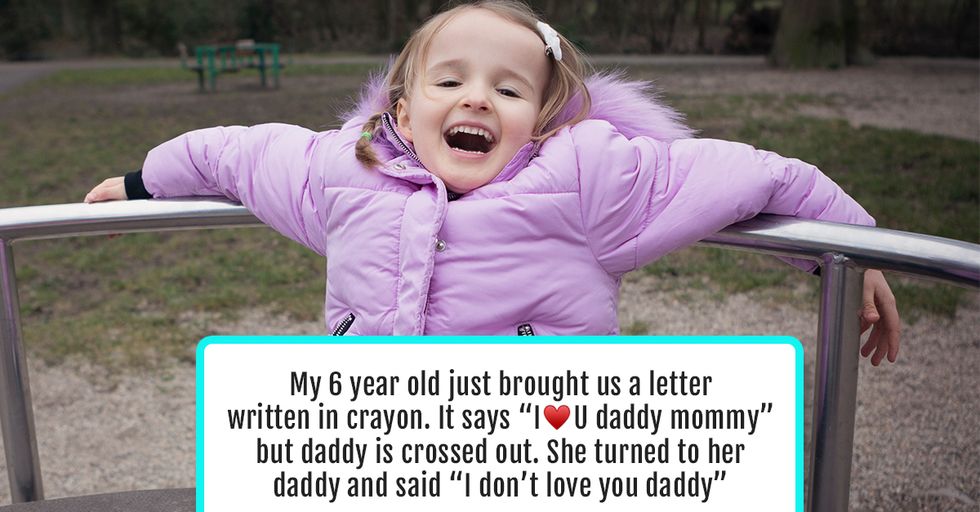 Kids are beautiful, beautiful little ange– Okay, that was a lie.

Anyone who's ever been around kids knows that they can be little monsters.

It's not their fault, their brains aren't fully developed (!) which means they're ruthless, demanding, and most of all... brutally honest.

Here are 11 adults on the most brutal thing a child has ever said to them.

r/AskReddit - Comment by u/Ashleysmashley42 on ”What is the most brutal thing a child has said to you?” from AskReddit

Ooof! We felt this one right in our chests! Miss Lisa is prettier? That's some pretty ruthless stuff. This little girl is hardcore.
Then again, she probably didn't understand the ramifications of what she was saying. So sorry Miss Ashley that you have to deal with little Regina George. She'll get better one day – promise.

Well, that was pretty ruthless. But the kid does have cancer, so she does have a point. But still, ruthless...

Oooh, we feel sorry for this poor man. Dad boobs are nothing to poke fun at. They are, after all, the product of too many nights spent awake watching the baby.
As a matter of fact, that little angel should be grateful. Next time he/she/it opens up their gob and says this sort of nonsense, remind them you got dad boobs being a good dad. At least, that is our assumption.

4. Mommy is too pretty for you

You gotta admire this kid's honesty. On the other hand, this is the sort of thing that'll have you crying in a corner eating ice cream.
She basically laid all of her father's fears bare, and then she added the topper "and I love her more than you." Precious child.

Fourth graders – aren't they the worst? We mean, kindergarteners might be worse, also high school is pretty brutal, but the fourth grade is just deadly.
We do have to say, however, that this teacher's first mistake was showing the kids his/her facebook. Everybody knows teachers don't have facebook. They have albums, and all the photos are in black and white.

6. A story in three parts

Wow, kid, way to destroy your parent's self esteem entirely. Good job, solid work. That being said, this kid could be pretty useful. Think about it.
Just send her over to all the people you hate and prompt her to give her unvarnished opinions. Is that underhanded and irresponsible? Yes. Is it a smart strategy? We think so.

You know who else has a big chin? Bruce Campbell, and he's made a pretty solid career out of it.  Your niece might be giving this commenter some Grade A career advice right here.
Buy Now
Think about it, if she was a witch, she could turn student loan collectors into flies and literally shoo them away. She could also magic herself a smaller chin if she wanted. Just a thought.

8. You're still not handsome

Wow, that's just ice cold. That's dagger-through-the-heart cold, and we can just imagine this kid's expression as she said it.
We do wonder, however, what the dad did to deserve the cross-out of doom. He must have done something. Also, why are little girls so ruthless?

10. Work on your Spanish, dude

Kid had a point, honestly. You're living with a Spanish family, and you're (presumably) supposed to be learning Spanish. Learn some freaking Spanish.

Actually, we wish we'd had professors as strict as this in our language classes. We would have actually learned a few things that stuck. Kid has a future in academics, if you ask us.

Ohhhh, the pain. We feel it right in our gut. This is so flawlessly savage, we want to help this person to the hospital. Wow, kid. Wow. If this made you laugh, share it on Facebook with your parent friends. We bet they have some hilarious additions to this list!