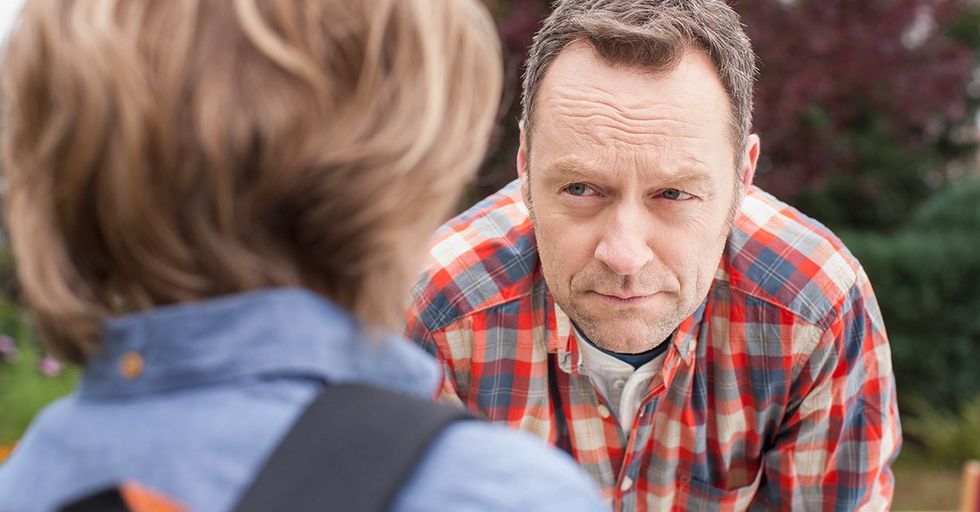 Sometimes, it's easy to forget that your parents are people, too. They had a whole life before you showed up!

As a result of parents being human beings, they sometimes have secrets that they wish their kids didn't know.

A recent AskReddit thread had kids reveal their parents' secrets which they aren't really supposed to know, and boy oh boy there were some real doozies.

Everything from cocaine to the Teletubbies!

Someone tried to kill my father when he was in his teens, he has scars on his head from where he was beat with a hammer. He doesn't know that I know this and I only know because I overheard a conversation between my grandmother and her brothers about the incident. – throwawaymylifeplz2

My divorced parents are both cheating on their current spouses. With each other – nowthathappens91

My mom had to do some soul searching for AA. She wrote a list called "life resentments" and Having Kids was the first bullet point. Found it while I was looking for my social security card to apply for my first job at 16. She kept it in a safe. – happypurplepig

My dad used to talk about growing up really poor, having to get food from food banks, etc. It’s one of the reasons that now that he owns his own business, he donates to food banks and all sorts of charities all the time. Paying it back.

Well, it turns out that my father's father owned a massive construction company and made millions of dollars (in the '50s and '60s). My uncle was selling massive amounts of cocaine and got busted. My grandfather bankrupted himself paying off judges and lawyers and all that to keep my uncle out of jail for most of his life. That’s why my dad grew up with nothing. He has no idea that I know. – ahhhhhsplat

I know that my mom got pregnant at 15 on purpose. She was constantly being shuttled between early '80s foster care and her own terrible family, and she felt like her only way to escape was to get emancipated through marriage. She knew my dad from school, and thought he'd make the perfect husband. Smart, funny, from a seemingly good family, and he had protected her several times. So she seduced him, knowing their parents would insist on marriage if she got knocked up, and she did. – Haceldama

I found out my dad liked watching Teletubbies. I could hear him watching it during the night as my bedroom is upstairs and my room is not sound proof at all. – MCDestroyer

When I was a child, we used to be semi-close to my dad's family. My grandparents came up (2+ hour drive) to talk to my parents about an "adult issue" and 10-year-old me was told to stay in my room with the door shut. After that, we never spoke to them again. I had no idea what happened.

Years later, I found a cousin on Facebook and we happened to go to the same college, so we met for coffee. I found out that the reason we no longer spoke was because my mom opened a whole bunch of credit cards and racked up a bunch of debt in my grandma's name that she never had any intention of paying back. My cousin and I kept it between us and she has no idea I know. – MrsNacho8000

I was adopted. I found out that my my biological dad was 18 and wanted one last romp with my mom (who was 17) before shipping off to the military. This is where I come from. She decided to adopt me out so we could both have better lives. He never stopped loving me or thinking about me. I haven't told my adoptive mom I know they hid this, and I may never. – RockPrincess01

My dad doesn't know that I found paperwork of his from when he got discharged from the military and diagnosed with borderline personality disorder with narcissistic features. Everything about his behavior suddenly made sense but there was literally no way to bring it up to him without making him extremely defensive or shutting down on me. It did give me peace of mind, though, and helped me work through a lot of trauma on my end after years of emotional gaslighting. – DirtyAngelToes

My uncle had just bought this awesome Jeep with huge tires, no top, flood lights, etc. It was bright orange. Me being around 9 at the time, when he came over to show my parents, all I wanted to do is take a ride in it. My uncle said it was cool, but wanted my dad to come along with him. It was kinda late, and still kinda chilly, so I brought a pillow and a blanket. Soon after we left, I fell asleep.

At some point, I woke up because we were stopped. I was really comfortable so I didn't move when I woke up, but I heard my uncle ask my dad if it was "OK to do this with him in the back seat?" My dad responded that I was out cold, and to break out the coke. I was confused cause my dad didn't drink soda... But he thought I was asleep so I just pretended to stay asleep. I then watched as he opened the glove box and started chopping up this white powder that my uncle passed to him. Then he sniffed it up his nose, and my uncle did the same. I thought maybe I was actually still asleep and just having a weird dream, but the memory persisted for years.

About 5 years ago (I'm in my late 30s now) I asked my uncle about it and he went pale. The first thing he said was "You were awake?!" Apparently, he had scored an 8-ball and didn't come over just to show off his new Jeep, he was planning to split it with my dad. They actually were snorting coke while I was in the Jeep. – atonex

My biological dad died when I was 2 (car accident going to his next duty station), and not too long ago I got a box of letters he had sent my aunt, uncle and his parents. Since he died when I was so young, I didn't really know him that well, but this treasure trove of letters gave me some real insight into who he was. It was a lot of letters from the time he was in the Navy before he married my mom, all the way up to not long before he died.

In one set of letters he discusses with my grandparents how he and my mom aren't getting along. He mentions that they might get a divorce, but he wanted their help in getting custody of me. (I think mostly because my mom was born and raised in Ireland and not yet a true citizen of the US so he was afraid he'd never see me again if I went with her.) Apparently she was fine with him taking me. The reconciled, but it's interesting to know that she would have given me up and I'd have grown up in LA instead of with her, ultimately on the East Coast of the U.S. – Willard2566

I sometimes hear my dad talking behind closed doors to my mom who passed away suddenly years ago. He typically tells her our life updates and that he misses her. My sister got married recently and I overheard him from outside his room telling my mom how beautiful my sister looked and how great her husband is that she never had the chance to meet. About how they had always spoke of that moment, watching their child marry, and he wished she was there with him to see us. We rarely speak about my mom at home, but 14 years later she's still very alive in his heart. – goeatalemon

My mom doesn't know I know she wasn't a virgin when she got married. She's fairly religious and says sex before marriage is a no-no and kind of looks down at all her siblings/family that have done it/moved in before marriage. You can say you regret it, mom, but don't be so judgy. – gingerly_said

When I was a kid my mom had "mole removal" surgery on her face and came back and had to recover for weeks. Granted, she did have a mole removed on her face...But miraculously, her A's turned into D's. Crazy how that was a side effect of face surgery. – Outworldentity