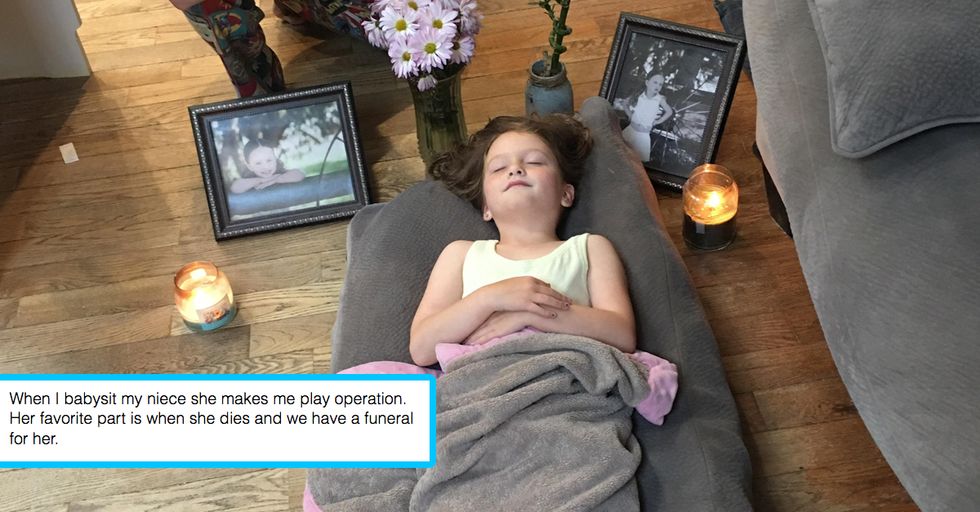 Kids Who Don't Know How Funny They're Being

Kids are like little tiny wrecking balls that you take with you everywhere you go. They are hilariously destructive at times, but it's hard not to laugh along. If you need some more light in your life, I'd recommend having a kid. They provide constant hours of entertainment, and even when you feel loopy and delirious from the lack of sleep, that somehow seems to make things even funnier.

The kids in this gallery are so funny, and many of them don't even realize it. They are geniuses of the highest level, who are absolutely killing the comedy game. Professional comedians have nothing on these little buggers. Professional comedians wish they were as funny as these small children who are just trying to do and get what they want.

Like, for example, this kid has no idea that they're the funniest physical comedian since Buster Keaton.

But it's true. Give this kid a three-picture deal because I'd watch those movies in an instant.

Another baby? That wasn't part of the deal. I guess her family doesn't need her anymore.

Hm, I may be misreading this so forgive me, but it seems to me like this little girl would like a cat for Christmas. She went through a lot of trouble to say so.

What's in that cup? I know it's probably juice, but this is a wine mom in training if I ever saw one. She's killing it.

This kid hasn't even been alive for a year, and he's already better at posing for photos than I will ever be!

When I babysit my niece she makes me play operation. Her favorite part is when she dies and we have a funeral for her. from pics

Kids can also be pretty strange. They're just learning about their own mortality, and sometimes that translates to pretend funerals where they play dead.

my little sister got a barbie dream house N HER ASIAN ASS MAKES ALL THE BARBIES TAKE OFF THEIR SHOES BEFORE ENTERING https://t.co/vBMWXaRSyC
— ivy (@ivy)1486931443.0

If she grew up thinking that was the norm, why wouldn't Barbie and Ken follow the same practice? They are polite people, after all.

I would watch this sitcom. Oh wait, it existed, and it was called Dinosaurs.

What, Spider-Man wasn't present at the birth of baby Jesus? There were definitely spiders there, so this is just like, one step away from that.

Where did this 5-year-old learn that he needed a go box? What is he watching a gangster movie?

This is amazing. Why would he want to eat those little sugar packets? Is he deprived of a reasonable amount of sugar at home?

There's no joke here. It's just a little baby making a funny face, and looking like your drunk uncle at Thanksgiving.

Wings in the tub

Sure, this is funny for like a second, but then you realize that this kid is a straight-up genius.

This kid was told not to blink while his picture was being taken, so he made sure that wouldn't happen, and this is the photo.

It's so cruel to make the chicken and the pig watch you eat your eggs and bacon! Also, why do you want your toy animals to watch you eat in the first place?

A note for dad

Just a casual warning for dad about what he might find in her room in the morning. Love the side note explaining for the grown man what diarrhea is.

Look, he's just being realistic. Most people don't live to be 100-years-old.

This is the spookiest cherry on top of an ice cream cone that I have ever seen! But to be honest, it still looks delicious.

I mean, this looks pretty official to me. The "school company" clearly means business, what with their official stamp and everything.

Too close for comfort

This picture makes me laugh so hard. When you're scared but you still want to be sort of brave anyway, you get this.

You at least have to ask! What if Siri did have a bunch of cookies and was waiting for you to ask for one?

There's no real arguing with this advice. Be a great person, and your life will be great. That's all you have to do.

As someone who grew up with my very own annoying brother, I want this girl to know that I understand. I get it. "Hammer everything he loves" is pretty dramatic though.

When three kids take a bubble bath you have to exponentially increase the bubbles you use for each kid. Right?

I've always admired people who can fall asleep in uncomfortable positions, like sitting on a plane, or on the bus, or standing up in downward dog.

I love that this is a thing that happens every morning. The dog looks really disappointed that he lost today!

"Dad, I am your daughter"

There is a little girl out there going about her life while not realizing that she is a Star Wars pun genius.

In some culture, I bet this does qualify as a "gentle kiss." But now, that kid will always know what a dolphin tastes like, and that's more than I can say for anyone else.

The kid who wants to be a sprinkled red-frosted donut is my hero. What a specific and delicious dream.

That kid is too smart for their own good. Share this with someone who knows an adorable, funny child!
20%

$14.36 $11.49
Buy Now
See More Deals
We hope you find these deals as awesome as we do! Just an FYI: we may receive a share of sales from links on this page