19 Kids Who Are Straight Up Little Monsters | 22 Words 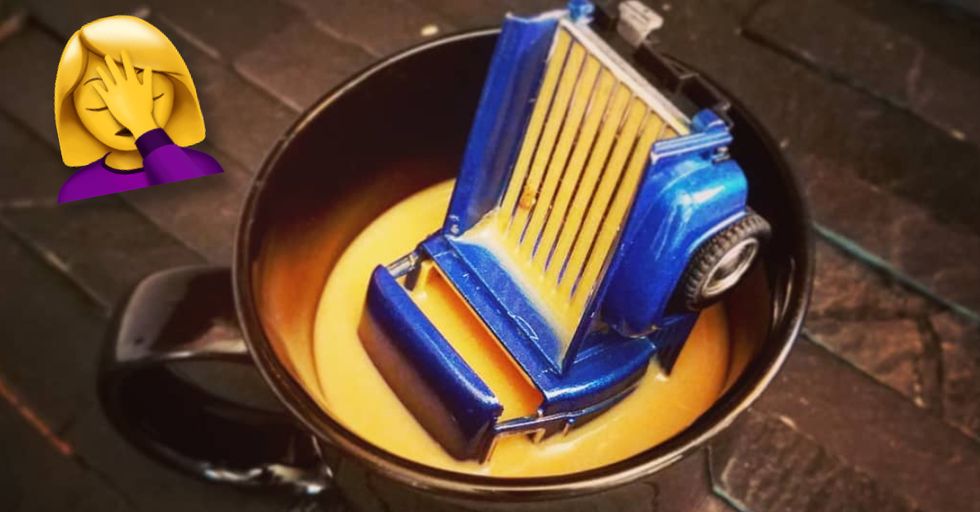 19 Kids Who Are Straight Up Little Monsters

That might be the only reason we let them get away with all the crap they pull.

No kid is perfect 100 percent of the time. Some are straight-up Dennis the Menaces. These 19 kids have proven that sometimes, kids are not cute.
This toddler dropped his toy truck in mom's coffee. His booger-filled, germ-ridden toy truck.
This kid took a bite out of ever pear to see which one he wanted to eat. There's only one word for this move, and we can't say it here.
Well, these kids are going to school with Sharpie on their face. Those are the faces of regret.
The note reads, "Dear Nana and Papa, I'm sorry for peeing on the porch. That was not nice. It was rude because no one wants to step in pee." The next one is truly hilarious...
This is what her daughter did when she didn't have a date for dinner. She could have at least given him more than dots for eyes.
At least he's in the right room, right? Eventually, he'll make it over to the toilet.
Hilarious. But also hard to explain to Child Protective Services.
I might be wrong, but I don't think Fudgicles are a natural part of a parakeet's diet. You know what? I'm not wrong.
This could not have tasted good. But this has nothing on the next one...
Why these kids would put a dirty sock in the container of mixed nuts, I don't know. Kids are nuts.
Kids are a huge expense, but sometimes they take the metaphor literally and throw actual money into an actual toilet.
Not going to lie, I cried when my brother was born because I wanted a sister instead. I was pissed.
Kids are so dumb. And I say that with love. But come one.

Look, he's just being honest. He's not going to have a good day just because his mom told him to. The next one is just precious...
It's just too early in her life for a face tattoo. Hopefully she learned her lesson.
Don't tell me you wouldn't have also jumped out of your skin if you saw this giant doll peeking out of your kid's room. That's a heart attack waiting to happen.
Joke's on this kid! The crust is the best part. But on a serious note, WTF.
This kid screamed and cried and insisted he was hungry and not too tired, and then he proceeded to fall asleep in his lunch. Of course.
Is this some sort of challenge? Kids can be so mean. Share this with someone in your life who has a monster child.