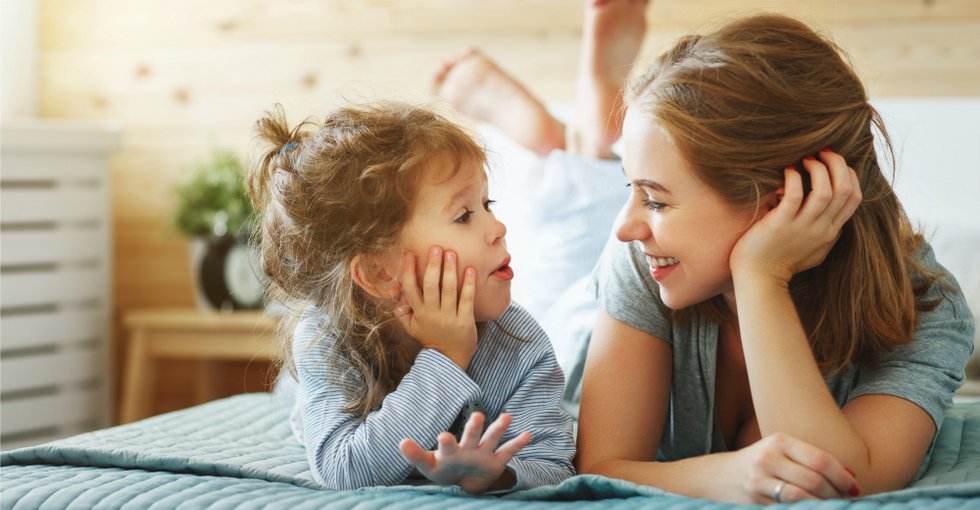 Kids say the wildest things, don't they? Just like these hilarious overheard kid comments, I too had quite the potty mouth as a youngster, and I can remember getting into serious trouble in second grade after calling one of my fellow students something that should never be repeated in public. I may have received detention because of it, but I obviously didn't learn my lesson, seeing as I still have just as much of a flair for profanity 25 years later. In fact, I've only gotten better at it with each year that goes by.

Because of their adorable naivete, kids often say things that they may think of as straightforward and innocent but suddenly all of the adults around them are in hysterics. Below are the best examples of grown-ups re-telling their hilarious overheard kid comments, and they couldn't help but laugh. Some of them may even remind you of your own youthful high jinks.

I had a friend who transported goods for a pharmaceutical company. He jokingly referred to it as 'delivering drugs' in front of his 4-year-old nephew. One day, the friend was supposed to pick his nephew up from daycare. His caretaker asked him conversationally what his uncle did for a living. Of course, the kid spouts off that his uncle delivered/sold drugs for a living. This did not go over well with the caretaker. She proceeded to call the mother, who burst out laughing before she could explain. -[deleted]

"My little brother (10) was telling a story about his friend Jay and himself to an older lady who is quite stiff about 'kids these days'."

Brother: 'Me and Jay were playing...' Lady: 'Jay' and I' Brother: 'No, you weren't there.' Laughter erupts. -NotBillNyeScienceGuy

"I was explaining to my 4-year-old son what muscles are and asked him to look at my biceps."

He said, 'Hold on I need to go get my magnifying glass.' I didn’t even know what to say and my wife is still laughing about it. -Teh_Chap

'That's where they bury dead bodies.'

'Where do they bury the heads?' -NeckroFeelyAck

"My wife and I take our children to see Santa in Macy's NYC."

We have a five-year-old boy and a three-year-old girl. We get on the elevator to go up and my son says to a twenty-something girl as she gets on, 'Hey girlfriend, do you wanna see my pokemon?' -kingdeuceoff

"I worked as a teacher's assistant for a year and I have a weird last name so I got the kids to call me Mr. A if they couldn't pronounce it, but some kids still tried to say their interpretation of my name."

One of the kids said, 'Mr. A, I'm gonna start calling you Mr. Avocado because I can't remember your last name, and I don't like avocados.' -scottydoeskno

"I had a group of 6-8-year-olds on an exploration hike decently far into the woods, and one of the boys told me he needed to go to the bathroom."

'OK, Trevor,' I asked, 'Do you know how to go to the bathroom outside?', questioning whether or not he understood to do his business out of view from the rest of the group, on a tree or something.

'Yeah,' he assured me while walking away, 'I just take my peanutses out and go.'

Couldn't argue with his answer. -Caruthers

"I was in a park and three children, about eight years old, were playing together."

Two of them ran away laughing. The third called them to come back but they kept running. He passed near me and whispered, 'Fucking earthlings' .-dedalus1009

"Literally 5 seconds ago a little girl asked me, 'Are you Melissa?'"

As a treat after dinner one Sunday, we had Cornettos. My brother peeled the wrapper off and then turned to my dad and said, 'Daaaaaad, can you nibble my nuts off?'

My aunt wet herself laughing. -bedwelld

"We were bringing lunch to the teachers at school and my daughter announced that we made a special soup for Mr. S because he's a virgin."

"I was in a McDonald's bathroom when I was in middle school 20 or so years ago, and the kid in the stall next to me very loudly said, 'GRANDMA, WHY DO YOU HAVE HAIRS ALL OVER YOUR BUTT?'"

I still giggle every time I think about it. -ooh_de_lally

"Once when my niece was very little, maybe 3, we passed a bridge under construction and there were two big cranes working."

She sighed in this resigned way and said, 'I knew one day the dinosaurs would come and get me...'

I almost had to pull over I laughed so hard! -AgnesofthePunk

"At the zoo watching a Rhino and a young family is next to me."

Out of the blue the Rhino got an erection, something brought to my attention by the young boy yelling 'Whoa, Look at his weiner! Is yours that big daddy?' The father turned bright red while the mother laughed her ass off. -claycat

"When my nephew was a toddler, around Christmas time, he asked me, 'Uncle Extrasherman, can we sled ride in hell?'"

I was kind of taken aback, trying not to laugh. We all heard it. My sister cleared it up though. He was trying to say, 'Can we sled ride down the hill?' -Extrasherman

"My son after wearing pants all winter and switching to shorts:"

"When my daughter was little, she would make any excuse to try to sleep in our bed."

We also had a lab named Morty who fell in love with her the day we brought her home from the hospital and followed her around until the day he died.

One night, she told me, 'Mommy, I can't sleep in my bed because Morty left all of his dog feathers in it.' -unolemon

"My niece was 3 when my nephew was born."

She came up to me and my girlfriend when we visiting my sister in the hospital and said, 'So am I not allowed to punch the baby in the head?' -PopeStizem

"My uncle had a tick in his ear when we went camping."

My nephew pronounced tick as 'dick' and would not stop shouting, 'Uncle Tom's got a big ol' dick in his ear!' over and over again. -RyFi17

"My husband was pulled over for random breath testing."

As the cop told us we were fine to go on our way, my youngest child piped up, 'Well that went better than last time!'

Turns out he meant last time hubby was RBTed he bitched about it because it was raining and the shoulder he was pulled up on was boggy. -macadamiaicecream

"My family went to the Olive Garden restaurant. The waitress delivers the obligatory bowl of salad with the salad tongs."

I proceed to start mixing up the salad with the tongs.

My 4-year old daughter sits up and stares into the bowl and then looks up at me and asks, 'What are you looking for?' -pinheadmaximus

"My partner's 5-year-old daughter was watching me do my makeup in the mirror and she said, 'You look like an angel'."

That's the sweetest thing she's ever said to me, so I gushed like a teenage girl and thanked her with a big grin on my face.

Then she elaborated: 'You look like you're dead' .-Assrocket33r

"It was about nine years ago when I was chilling at my sister's place during summer break."

She was watching a 60 Minutes interview of recently elected President Barack Obama with my nieces in the room. The youngest at the time who was three saw the screen and then yelled 'Ooo it's Abracadabra!' when she saw who was talking. -AvadaNevada

"So my almost 4 year old has a speech delay, and she pronounces horse as 'whore' and she has a pony toy that she takes everywhere."

Anyway, she dropped it in Walmart one time and I didn’t notice and was walking away (she was in the cart) and she yells 'MOMMY MY WHORE! Get my whore!! I laughed so hard, as did a lot of people around me. Obviously had some nasty looks, but whatever. She thinks she says horse.

We’re working on it. -SuddenlyAshley

"A 3-ish-year-old girl on an airplane loudly announced, 'My daddy left me and mommy...and I don't know where he went.'"

Then she pointed to her mom's tummy and told everyone, 'There's a baby in there too.'

The mom had to remind her to tell the rest of the story, that daddy had taken another plane to a different city for work, but would be meeting up with them in a few days on their family vacation. -TheAnswerIsGrey

"I was a counselor at a summer camp and we were taking the kids on a trip to the ice cream store."

As I'm writing down the kids' orders a little Asian girl in my group comes up to me and says, 'I can't eat ice cream, it makes my tummy hurt.' I replied, 'Oh I'm sorry, are you lactose intolerant?' She looks back at me with a blank stare and says, 'No, I'm Chinese.' Might still be the funniest thing I've heard to this day. -splityoassintwo

"My cousin was a toddler, didn't have much of a vocabulary and was easily excited by everything construction related."

I presume the guy driving the dump truck was confused. -Wightly

"My 18-month-old daughter, my wife, and I went to the beach about a month ago."

We are teaching her manners so when she wants something she needs to follow the formula, '(thing I want) please!'

We're teaching her to tell us when she wants to go to the beach, but it's sounding more like 'bitch'. We're trying to correct her but it's not getting through.

She gets frustrated with us and goes up to my mother-in-law who asks her if she wants a treat of some sort and she just says, 'Bitch, please.' -Bad-Brains

"I'm a single mom to a 6-year-old daughter and a 5-year-old son and I was going to buy them treats from an ice cream truck."

I gave them limited options, due to the prices, and as we walked away, my son asked why. My little 'mini-me' launched into a story about how we need to be grateful for the blessings we have. Then she said, 'Some kids don't even have toys! Some kids don't have anything to play with except their own bodies!' -missbecki73

This one takes the cake for best and most hilarious overheard kid comments...

Friends of mine recently had a new baby and they told me this story about how their older kid was super excited for the new sibling and for the first few days they brought her home everything was great and nice and lovey.

Then on like the third day or so over breakfast the older kid comes over and asks, 'So, when's the baby going back home?' -AccioSexLife