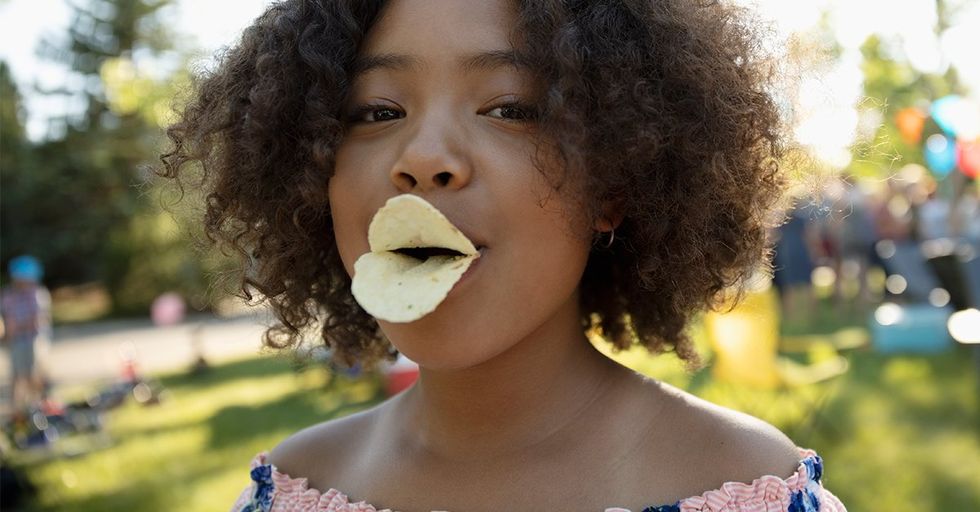 Little kids are full of hilarious ideas. They really are little unintentional comedians walking around saying mind-blowingly funny stuff like all the time without realizing it. When kids don't know or remember the name of something common, they will just make up a new word for it, one that is often way more descriptive, apt, and hilarious than the real one. You know exactly what they're talking about because their name for that thing makes so much sense.

For example, if you don't remember the word for rhinoceros, why not call it a battle unicorn? It makes more sense. Automatic toilets, according to kids, are mean toilets because well, they are mean! And aggressive! Ravioli? No. From now on, we call them pasta pockets. Because that! Is! What! They! Are! Kids are geniuses and you won't be able to get through this list of hilarious times they renamed common objects without giggling.

Kids don't really know what they're doing. They've only been alive for a few years. They don't know all the things a person is supposed to know yet, like the names of some very common things...

I'm not saying that my daughter is overly dramatic. I'm just reminding you that she calls tears "wet drops of sad."
— Kim Bongiorno (@Kim Bongiorno)1459245603.0

She's not wrong, and her phrase is way more poetic, so from now on, tears are wet drops of sad. NEXT!

They are birds, and they're cold... But then again, there are Snowy Owls, so she's a bit off base.

Now this I can get behind. 100 percent, crows are Halloween eagles. I don't know why we even bothered to come up with another name for them.

2yo referred to her coat pockets as "snack holes" and this is what I shall forever call them
— Rebecca Caprara (@Rebecca Caprara)1519412581.0

I mean, what else do you use your pockets for? Case closed. Can you predict what one kid called gloves?

good morning my toddler calls tampons "happy birthdays' because they are wrapped in a way that reminds him of presents
— Emily Gould (@Emily Gould)1497362590.0

This is so pure and beautiful and also wrong and I hate it. Tampons are the worst.

My daughter calls people who are reading "book lookers" and for some reason I love it so much more than "readers."
— Mike Reynolds (@Mike Reynolds)1514752124.0

I love the term "book lookers." I want a custom denim jacket with "Book Looker" embroidered in huge letters on the back. Someone make that happen for me.

Little kids may wake up too early but at least my five-year-old daughter calls the airport the airplane store.
— Jim Gaffigan (@Jim Gaffigan)1410091213.0

My kid just called Fruit Loops "Pride Cheerios" and I've never been happier in my life that this little dude calls me mom.
— OutnumberedMother (@OutnumberedMother)1536164967.0

This is adorable and perfect, and I think this is a real branding opportunity for Froot Loops.

"Mattress curtains" sounds like what a Victorian aristocrat would call bed sheets. "Fetch me my mattress curtains post haste!" I seriously cannot get over these. They just keep getting better and better.

@TessaDare @MerriamWebster A friend’s 5yo was wailing about seeing “flamingo witches” after watching the National G… https://t.co/wwszPEcBIj
— jillian (@jillian)1527646250.0

Seriously, between flamingo witches and Halloween eagles, I just want to put a bunch of kids in a room and have them rename every species of bird.

@TessaDare @MerriamWebster My three year old decided escalators are called “robot stairs,” and so it has been decreed in our house.
— Hunter Campbell (@Hunter Campbell)1527807877.0

"Potato worms" maybe don't sound as appetizing as French fries, but if you call them potato worms, maybe no one will try to steal some from you.

Do you remember what it was like to experience carbonation for the first time? It was spicy! This kid is totally right. I can't wait for you to read the next one.

They are so mean and this is a perfect name for them! Half the time, they start flushing before I'm even up, and they're so aggressive that they splash water everywhere!

I'm sorry, this is way too adorable and I cannot allow it because I literally cannot handle the cuteness. It's too much.

These boops were made for walking! See? It's so much more fun to say than "boots."

This is way too cute, but I think at like, age 12, it might be time to correct her. Don't want a grown adult calling it gubble bum.

Tell me, what are gloves if not hand socks? I guess mittens are more like hand socks, but the point is, the term fits!

My toddler calls the roadrunner in Wile E. Coyote, "Racecar Chicken," and it's pretty much the cutest thing ever.
— Diana Loveless (@Diana Loveless)1493493631.0

I don't know what it is about kids and birds, but kids come up with the best, funniest names for birds. It's incredible.

I feel like they do many those earmuffs that also have headphones in them, so this is really pretty accurate.

My toddler calls rivers "tunnel water" because she can never remember the right word for them and honestly it's my favorite thing.
— kelly andrew 🍂 (@kelly andrew 🍂)1551463210.0

Rivers are pretty much inverted tunnels filled with water, so this kid makes a lot of sense. What can I tell ya?

The stories in my eyes

This is at once super poetic and super creepy! Honestly, the next one is legendary.

Of course rhinos are battle unicorns! That's a perfect name for them!

I love ravioli. They are warm and delicious, and the term pasta pocket makes them seem even cozier.

To be fair, you do sort of feel like a little baby when you're wearing a bathing suit. No? Just me?

It's so true that parents start adopting the language of their small kids. Maybe it's because their kids are so good at naming things.

Oh no, this one made me cringe! Share this with someone to make them laugh!