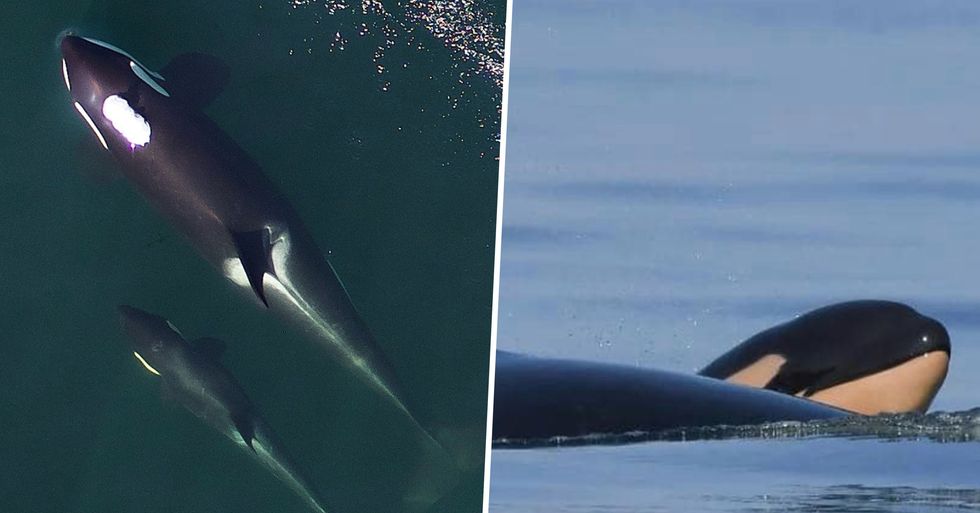 A heartbreaking story has taken a dramatic turn after the famous killer whale who grieved the loss of her 1-day old calf is now a mother again!

And this has also been proven in the wild.

Researchers at the SR3 Sealife Response, Rehabilitation, and Research have been tracking a pregnant killer whale who has been spotted regularly around the San Juan Island.

She has been named Tahlequah...

And 2 years ago, the mother raised global concern when she lost her calf.

She carried the body of her dead baby for seventeen days as she just couldn't let go.

She refused to let her baby sink to the bottom of the ocean or be eaten by predators, so she balanced it's body on the top of her head as she followed her pod.

This was heartbreaking for the researchers to see...

And it just proved even more how emotionally attached these whales are to one another.

When Tahlequah eventually let go of her baby...

It took her up until this very month to finally move on... because she is now pregnant again!

According to scientists John Durban, senior scientist of Southall Environmental Associates, and Holly Fearnbach, marine mammal research director of SR3, the expectant mom was quite a while away from her baby being born.

The gestation period for orcas is typically eighteen months, and families stick together for life...

But southern resident whales such as Tahlequah are struggling to survive. Southern resident orcas are now down to a population of just seventy-two, and most pregnancies are sadly not successful.

Fearnbach and Durban stressed that humans can help contribute to the whales’ survival...

This is by respecting their space and giving them peace and quiet to allow them to use sound to hunt.

In a press release, the pair said:

"Studies by our colleagues at the University of Washington have shown that these reproductive failures are linked to nutrition and access to their Chinook salmon prey. So, we hope folks on the water can give the Southern Residents plenty of space to forage at this important time."

Now, a little over a month since scientists revealed Tahlequah was pregnant again...

And the birth has come a lot sooner than we thought! The calf is said to be in "good condition..."

Tahlequah was one of many pregnant killer whales monitored by SR3, which were recording 3 separate pods before the birth.

BREAKING: Tahlequah (J35) has successfully given birth to a new calf tonight! Tahlequah is the orca who touched the… https://t.co/iHsWOScKTm
— Quad Finn (@Quad Finn)1599361421.0

The photos were used to keep track of the whales and make sure their condition was okay over the course of their pregnancy.

Every calf was monitored to make sure they survived through to term...

As the orca population is the lowest it has been in more than 40 years.

They were "really encouraged Tahlequah carried the calf to term," adding, "[We] hope our continued monitoring shows it to be in good condition, and [to] document its growth."

Deborah Giles, science and research director for Wild Orca, was tracking the pods to see how they were getting on...

She collected fecal samples for conservation research by the University of Washington Center for Conservation Biology.

She was happy with their progress, with Giles telling The Seattle Times...

"It was a fantastic day with members of all three pods. We were hugely successful, collecting seven samples, our daily record for the year. The whales behaved much like we used to see them, socialising, with lots of amazing surface active behaviour."

This is positive news as their old behavior has started to change...

As the orcas are forced to leave their pods to search for food, meaning they're socializing less.

Thankfully, Tahlequah’s baby and the new calves are doing just fine in their new environment.

This is amazing news! Keep on scrolling to read about Canada passing the "Free Willy" bill that bans dolphin and whale captivity...