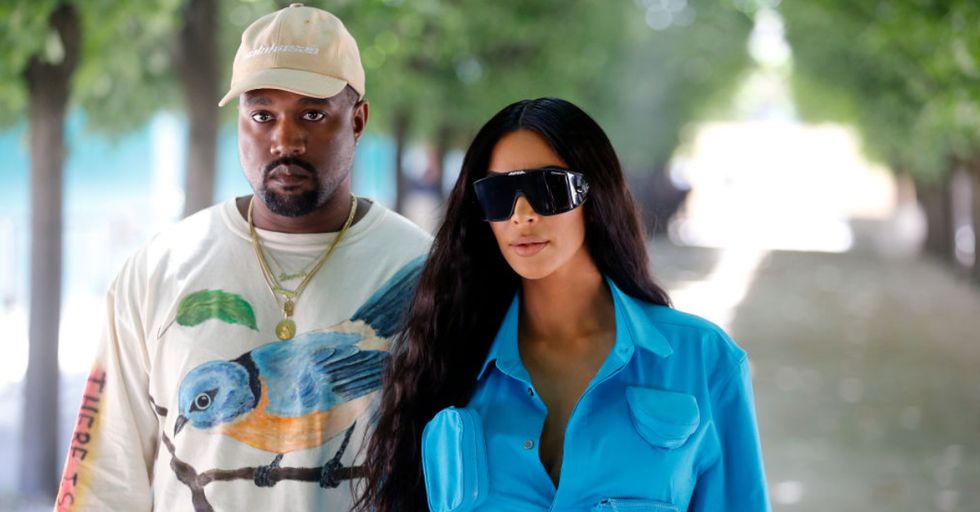 Everyone has an eye on the wildfire situation in California. Over the last several days, deadly fires have broken out across the state. Needless to say, evacuation orders came down for many areas in the vicinity of the raging fires. And for most people, there was no choice but to leave home and hope for the best. In the case of Kim Kardashian and Kanye West, however, there was another option.

Ever heard of private firefighters? If you haven't, that's pretty normal. After all, most of us only know firefighters as public servants responding to every call. But some insurance companies go the extra mile for high-paying clients. Find out what the deal is--with Kim and Kanye, and with the California fires as a whole.

At least 50 people have been confirmed dead statewide, in the wake of northern California’s Camp Fire and Los Angeles county’s Woolsey Fire.

Huge amounts of land have been devastated.

Already, over 200,000 acres of land have burned due to the combined forces of the fires.

Already fire-prone areas were aggravated by dryness and tinder availability.

Check out the gradual climate shift:

If Northern California had received anywhere near the typical amount of autumn precipitation this year (around 4-5… https://t.co/zhvssIrZHd
— Daniel Swain (@Daniel Swain)1541872452.0

California has never been known for its rainfall, but even so, the change here is evident.

Certain demographics are more at risk.

It was been warned that the elderly and people with disabilities are in greater danger of perishing in the fires.

The firefighting effort is growing.

According to CBS News, some 5,615 people are fighting the fire, with 52,000 people having been evacuated from endangered areas.

Footage only emphasizes the dire situation.

This was the Butte County Camp Fire, as of November 9th.

Just look at these shots from Malibu.

The Pacific Coast highway was packed with evacuees.

The Woolsey fire shook areas in LA and Ventura County.

Westlake, Calabasas, Agoura Hills, and Oak Park, along with Malibu, have all suffered under the onslaught of the wildfire.

National Guard troops have joined the effort in searching for both missing people and human remains.

Looters have also become a problem.

There are multiple counts of police arresting looters from homes that were evacuated.

Each fire is at least partially contained.

Some people have been let in to newly re-opened areas, often having to check if their homes are still standing.

But some people have been able to avoid this.

TMZ reported that the fire did begin to encroach on the property of Kim Kardashian and Kanye West—but the couple had hired a team of private firefighters to defend the property.

The firefighters were successful.

Equipped with hoses, the team dug in ditches to create a fire break, and in the end saved the home. The West residence is worth a whopping $60 million.

Kim tweeted about the close save.

The family was evacuated previously, before the fires drew too close to their neighborhood.

Ultimately, this also protected the other homes in the neighborhood.

The Kardashian-West home is situated at the end of a cul-de-sac, and next to a field. Thus, if their home burned, the others nearby would likely have followed.

TMZ spoke with some of the other families.

Neighbors are apparently thanking the Wests for putting a team in place to protect the area.

However, not everyone is so fortunate, or wealthy.

Thousands of structures—many of them homes—have been destroyed in the blazes.

Yet, insurance companies do offer this rare perk for certain clients.

AIG’s Private Client Group’s Wildfire Protection Unit, for example, is made of certified employees who both respond to fires in real time and protect homes with flame retardants.

Guess who those clients are?

NBC reports that members of the group that qualify for AIG’s Wildfire Protection Unit services take up 42% of Forbes’ ‘400 Richest Americans’ list.

It’s been a heartbreaking few days. This is what’s left of my house. Love. Many people in Malibu and surrounding ar… https://t.co/5E1q2ABZlz
— Liam Hemsworth (@Liam Hemsworth)1542127505.0

The actor tweeted out these photo of his burned-down Malibu home.

I spent the day in Malibu yesterday and it was amazing to see the community pulling together to help each other out… https://t.co/kowXKKWXuz
— Liam Hemsworth (@Liam Hemsworth)1542127505.0

In tragedy, it’s always comforting to see an outpouring of humanity and support from communities.

In all the rush, the direct cause of these fires remains unknown.

Firefighters have stated that pinpointing the fire’s origin can take weeks, or even months, especially during large fires like these that take time to contain. "There's a lot of reasons for a fire," said U.S. Interior Secretary Ryan Zinke. "Now is really not the time to point fingers."

His claim, however, infuriated firefighters and local leaders in affected areas—and vastly oversimplified the issue.

First off, forests aren’t the issue.

While these are indeed ‘wildfires,’ forest fires they are not. They began in areas known as the wildland-urban interface. Those are places where communities are in close proximity to undeveloped areas.

It’s true that California wildfires are getting bigger.

But they’re also getting harder to predict. Climate change is absolutely in part to blame, and there’s also a reason the most deadly (and financially draining) fires happen in wildland-urban interface areas. Structures there are often not as fire-resistant as they could be, and that leaves these areas vulnerable.

Most of California’s forests aren’t even owned by the state.

In fact, the majority of forested land (57%) is federally held. Only 3% is owned by the state, and they allocate millions each year toward lowering wildfire risk.

The Camp fire in NorCal is roughly 35% contained. It’s the deadliest fire in California history.  The Woolsey fire in LA and Ventura counties is 47% contained.  Finally, the Hill fire is thankfully 94% contained.

Experts are hoping this improves further.

Although currently meteorologists warn of poor air quality, they are expecting conditions to improve soon, perhaps even allowing for potential rainfall around Thanksgiving. Fingers crossed that this happens!

Keep updated on news of the wildfires.

And everyone in California affected by the fires: please stay safe!